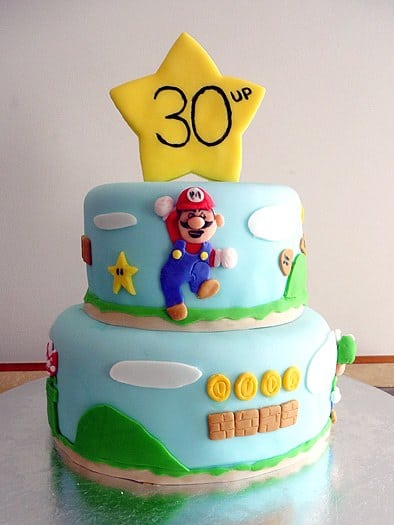 This was easily the most fun cake I have made to date. For any kid who grew up in the 1980’s, there is undoubtedly a soft spot in your heart for Nintendo and Super Mario Brothers. When an old friend asked about doing a Super Mario Brothers cake for her boyfriend’s 30th birthday, I was giddy. I couldn’t wait to get started. I wanted to depict all of the old, traditional pieces of the original game, but since they play the New Super Mario Brothers game on the Wii I decided to use that scenic backdrop, and I was thrilled with how it turned out.

Everything on the cake was created with fondant and edible; I used toothpicks to create the detail on the bricks, coins and turtle and used a black edible marker for the faces and goomba legs. For the star topper, I pre-measured craft wire that I get at Michael’s, so that it would go about 1/3 of the way up the star, and the whole way into the top layer of the cake for support. I cut out the star, brushed on a little water, then gently pressed the wire onto what would be the back. I then cut another star and laid it on top of the wire and gently pressed it into the other star. This sealed them together, and the wire between them, to create a sturdy support for the topper. I let it dry overnight before adding it to the top of the cake before delivery. 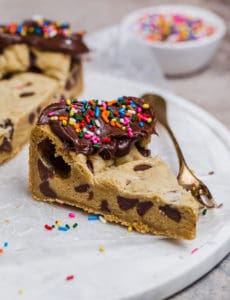 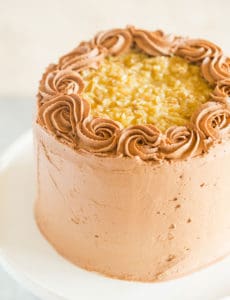