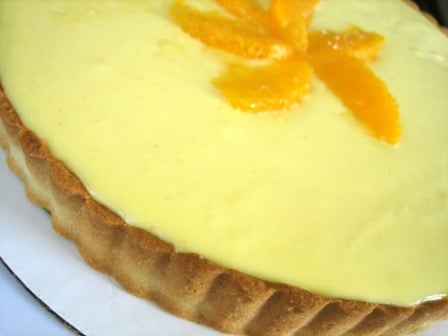 My first tart, hooray! I am in awe of the beauty of the fluted buttery crust! 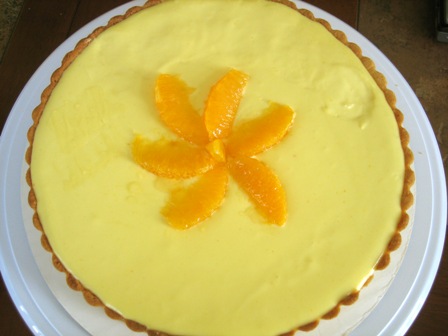 This tart can easily be described as a creamsicle wrapped up in a buttery shortbread crust. The first part of this tart involved making the cream. A number of people had noted problems with getting the cream up to 180 degrees, but I used a metal bowl and hit 180 degrees in just about 10 minutes, as the recipe indicated. After heating the cream, the butter is whirred in, in more of an emulsion type of procedure. A quick taste confirmed that this was a silky smooth and perfectly orange mixture.

The dough for this tart was nothing short of amazing. Using a food processor to combine it the key was to have patience. Some said that their dough turned out crumbly and dry. After adding the egg it did appear to be dry and course, but after about five of the 10 second pulses, the sound changed (as Dorie indicated it would) and the dough clumped up. It didn’t form a cohesive ball, but clumped together enough to be able to be rolled out very nicely. 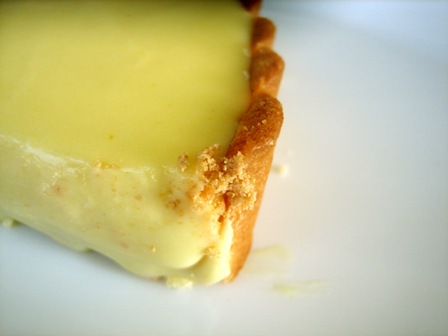 The tart had a nice, light flavor to it, was nice and creamy, and I just can’t say enough about that crust! I typically prefer richer desserts over citrus ones, but this was a nice change of pace and I’d love to fill that tart crust with some luscious chocolate! :)

I did try to brush the tart with the boiled down apple jelly, but it was just too much for my delicate cream. You can see some imperfections on the surface, and that’s where I tried to lightly brush it on, but I chose to just skip it as it seemed to be too much for the surface.

The Tuesdays With Dorie group is nearing 125 members, so be sure to head on over to the blog and check out everyone’s lemon and orange tarts! 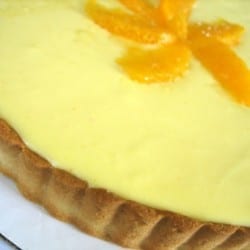 For the Orange Filling: