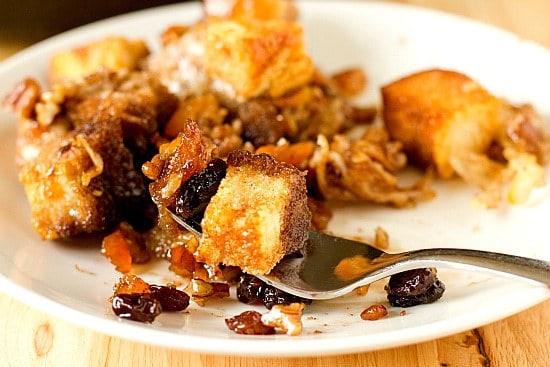 For as much as I loved (and I mean, really loved) the bourbon bread pudding that I made a couple of weeks ago, I thought that I might never make another bread pudding recipe again. That I may have reached the pinnacle of all that is bread pudding. Sort of the epiphany I had with my all-time favorite chocolate chip cookies. While classic chocolate chip cookies are pretty basic in their makeup, the amount of creativity and variations that you can spin on bread pudding is seemingly endless. Which is why when my Chief Culinary Consultant was doing some searching for Lenten recipes and found this one, it took me approximately 10 seconds to decide I needed to make it. This was unlike any bread pudding that I had ever come across. As I’ve come to find out, different can definitely be good. And in this case, it was very good! 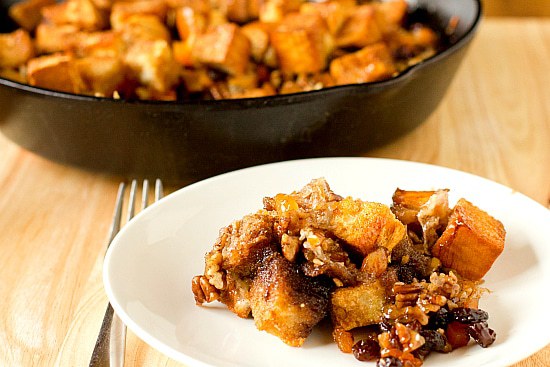 Now I said that it took me about 10 seconds to decide that I needed to make this recipe; for me, that’s actually rather long. Usually recipes jump out at me and I can make a split-second decision. So what held me up here? This recipe is all-sweet except for one ingredient: cheese. It caught me off guard. I thought twice about it, but figured there had to be a good reason to include it and plus, now I was even more curious about the recipe, so I forged ahead. As almost always, I’m so glad that I did.

This bread pudding is certainly unique, and more delicious than I could have predicted. Instead of a custard to soak and bind the bread together, this bread pudding relies on a brown sugar syrup that has been steeped with cinnamon and cloves. The layers of bread are separated by layers of Monterey Jack cheese, raisins, dried apricots, and chopped pecans. If I hadn’t been the one to make this dish, I would have never known cheese was even in it. It’s so mild, you can’t taste it, but it provides a hint of saltiness that balances out the sweet factor of the dish.

This is a traditional Mexican dessert that is eaten primarily during Lent. The actual ingredients in the dish all have a symbolism connected to Lent and Easter, which you can read about here. It’s a lot of fun to experiment with dishes and cuisines that have been relatively unknown to me, especially when I find ones as delicious as this bread pudding! 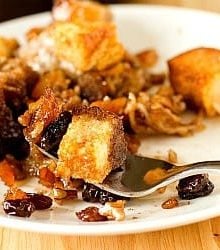