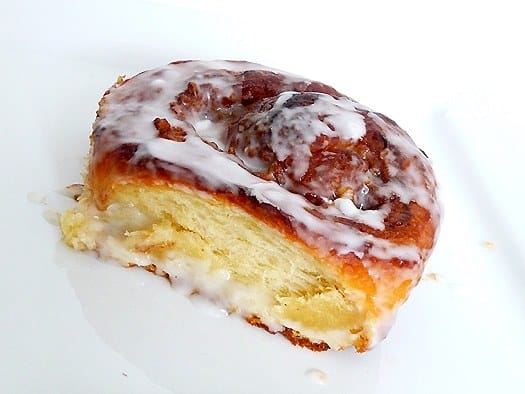 If you have a big soft spot in your heart for ooey gooey breakfast pastries, then you will no doubt fall in love with these at first bite. And if you don’t have that big soft spot, take one bite of these and I guarantee you will be a convert. Cream cheese is rolled into the pastry dough (much like laminated dough) and creates a soft and flaky dough. That, combined with the incredible filling, makes for the most flavorful cinnamon rolls that I have ever tasted. While these require you to set aside some time and involve multiple steps, they are not difficult and without a doubt absolutely worth it. If you have overnight guests and they wake up to these fresh from the oven, you will score some serious points and may have to start turning house guests away. Everyone will want to stay over! 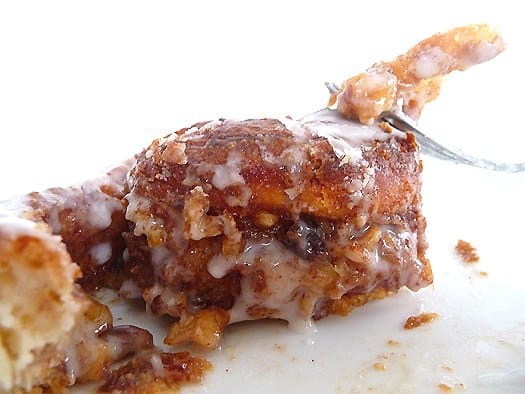 I saw these a couple of weeks ago and immediately couldn’t wait to make them. They sounded fabulous and looked even better. I have made cinnamon rolls before, but they were a pretty “standard” recipe. These rolls really caught my eye for two reasons: (1) there is cream cheese rolled right into the dough, and (2) the filling was much more complex and sounded infinitely more flavorful than the standard cinnamon and sugar filling. These are, hands down, the best cinnamon rolls I have ever had. They put the ultra-popular mall types to shame.

Need more evidence? My 89-year old grandma adores cinnamon rolls – they might be her most favorite thing in the world. Sadly, she doesn’t eat much anymore – she just really picks at her food when someone fixes her a plate. I went to visit her and brought these cinnamon rolls figuring she would enjoy them. She polished one off within 15 minutes. And these are HUGE. What more proof do you need that something is fabulous? 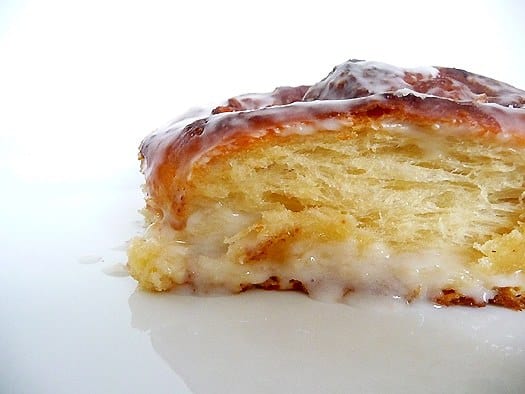 Notes on the recipe:

♦ Rolling the cream cheese into the dough is much like laminating pastry dough with butter, except that all of the refrigerating and re-rolling steps aren’t needed here. The result, however, is much the same – a light and flaky pastry dough that melts in your mouth.

♦ When rolling up the dough, try to keep it as tight as possible. I had some trouble doing this, and as you can tell, mine don’t “swirl” as much as I would have liked. Still tasted fabulous though, of course!

♦  Use the quantities for the icing as a guide – some people like it thinner, some thicker. And drizzle on as much as you want – again, totally up to you! 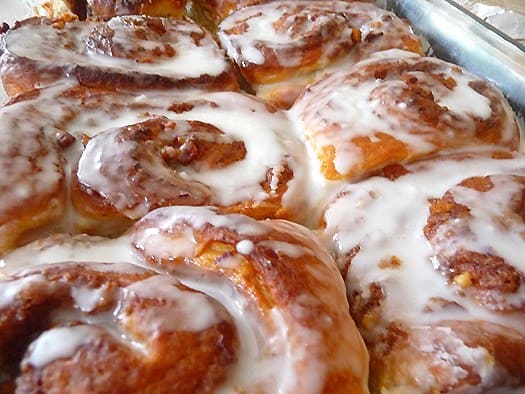 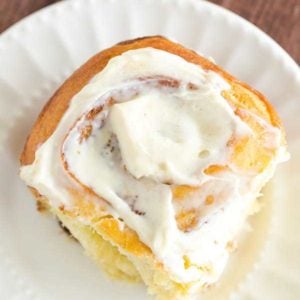 For Laminating the Dough

For Brushing the Cinnamon Rolls