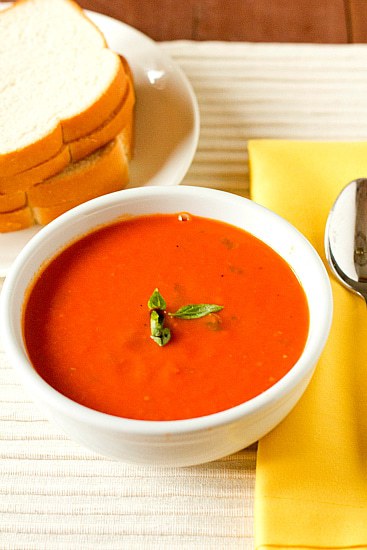 The more I work through some soup recipes the more I realize what strange little taste buds I had as a kid. It’s been meticulously documented that I was pretty much that kid that loved peanut butter and jelly more than just about anything. Sometimes more than life itself. If you wanted me to be happy, hand me peanut butter and grape jelly smashed between two pieces of white bread. But hey, I did eat the crusts. Gold star for me.  Like most kids, the only time I would have anything to do with fish or seafood was in the form of fish sticks. Yet, I was strangely addicted to New England Clam Chowder. So totally bizarre. And then there was the issue of tomatoes. You’d think that growing up in an Italian family with a grandfather who kept a garden most would die for today, with fresh tomatoes readily available, that I would like the darn things. Not a chance. God help you if you let even a fraction of an ounce of juice from a tomato touch something I was eating. I would refuse to eat it. It wasn’t up until just a few years ago that I’ve grown to appreciate a tomato (very thinly sliced, though) on a sandwich or burger. Yet somehow I gobbled up tomato soup as a kid and a teenager (even an adult) like it was going out of style. Flat-out loved it. Nothing better than a bowl of tomato soup with some shredded cheddar cheese sprinkled on top and a grilled cheese sandwich. I felt it was high-time that I got around to making a homemade version since, like all other soups, reading the label on the canned stuff makes you go, “Bleh!” 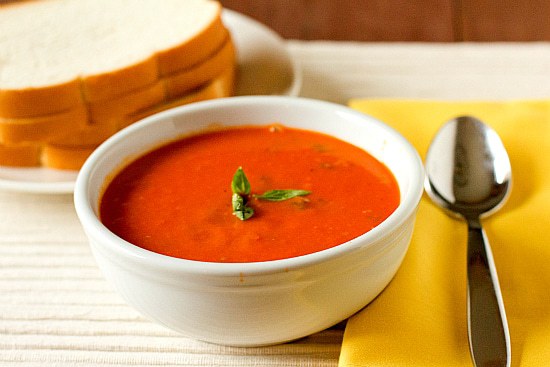 I saw this particular recipe recently on Tracey’s Culinary Adventures and loved it for two reasons: First, it came from Cook’s Illustrated, which is always my first stop when I’m looking for a new recipe or a no-fail version of a classic. Second, the soup gains its thick and creamy texture not from cream, but from adding pieces of bread to the soup. Genius! This method was also used in the Creamy Potato & Leek Soup that I made last year, which was also a huge hit.

I love the bright, clean flavor of tomatoes in this soup, as well as the tiny bit of kick that you get from the garlic and crushed red pepper. I also added some freshly ground black pepper right before serving as well for another little kick. It’s wonderful! The thick and creamy consistency makes it quite hearty and definitely enough for a meal with a handful of crackers or, of course, a grilled cheese sandwich. 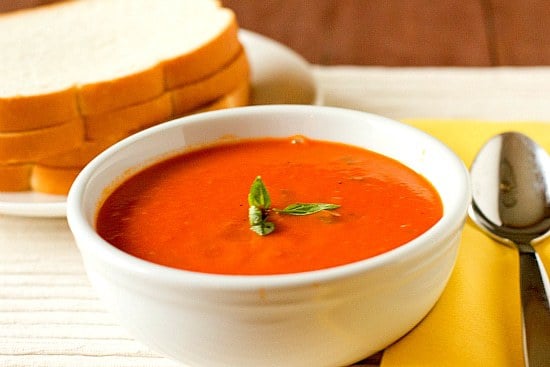 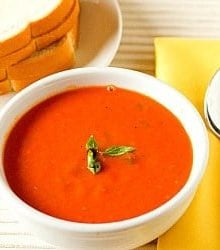