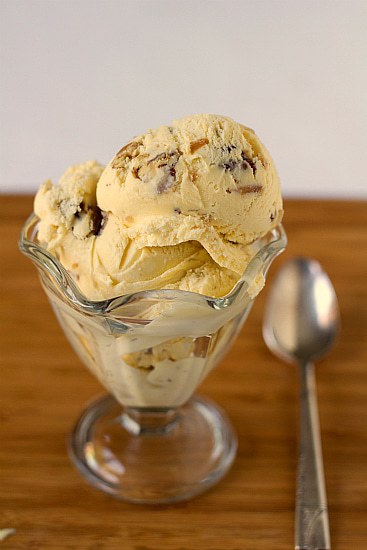 I used my fair share of alcohol in sweets for my birthday (Tiramisu Cupcakes), St. Patrick’s Day (Guinness-Milk Chocolate Ice Cream, Irish Car Bomb Cupcakes), Cinco de Mayo (Margarita Cupcakes), and the Kentucky Derby (Chocolate Bourbon Walnut Pie) but haven’t used any since that 6-week period. I guess my taste buds knew it had been a couple of months since there was any booziness going on the kitchen, because when I started browsing around for a new ice cream recipe to try, this one immediately jumped out at me. Vanilla ice cream with a bit of rum in it, plus rum-soaked dates and maple-glazed pecans sounded irresistible to me. And so like a good baker, I made it immediately. And then proceeded to eat way more of it than I should have. However, life is short. So, eat ice cream. Right? Right. :) 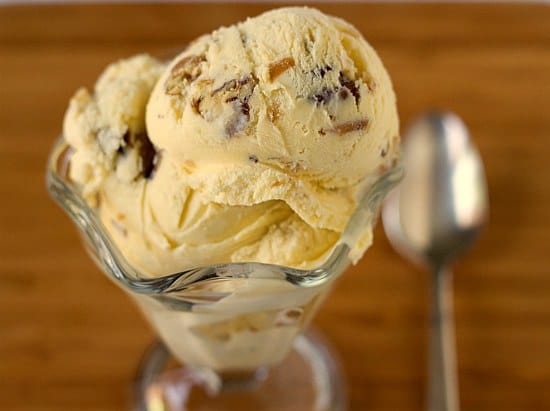 The vanilla base for the ice cream is pretty similar to classic vanilla bean ice cream, although only vanilla extract is used (not a vanilla bean), and an extra egg yolk is added. And of course a couple tablespoons of rum! In addition, we have dates that have been macerating in rum for at least 4 hours, and a batch of pecans that have been glazed with maple syrup. You can skip the maple syrup if you’d like and just use regular toasted pecans, but I thought the addition of the maple flavor paired with the rum and dates would be fabulous. And it totally was. All of the flavors just bounce off of each other and do a little dance. Love this ice cream! Plus, of all the ice creams that I’ve made over the last couple of years, my mom has declared this her very favorite of all of them. Mom’s vote has to count for something, right? :) 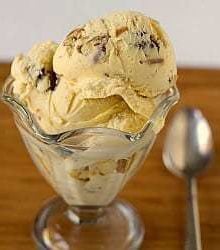 For the Maple-Glazed Pecans: