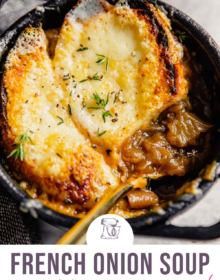 Bubbling Gruyere cheese and crispy baguette top a brothy base full of perfectly braised onions in this showstopping yet simple French onion soup recipe. Whether you’re making it to warm up on a cold day or for a delicious date night in, this tastes rich, luxurious, and cozy each and every time.

Read on for ingredient tips, a slow cooker version, and make-ahead instructions!

A must-order every time I go to a nice restaurant, I will never turn down French onion soup. There is something about the look of a beautifully bubbling load of cheese, browned to perfection over crunchy bread.

If you’ve ever thought that it would be too difficult to make at home, I’m here to tell you that it is TOTALLY doable and you will be absolutely enamored with the results.

And the aroma in the kitchen? Oh man! Let’s get started!

What is French onion soup, exactly?

Onion soups have been around since Roman times, as onions were easy to grow in many climates for very little. The version of French Onion soup that we are used to here in the U.S. originated in the 1800s. In the 1860s, a New York restaurateur brought the recipe to the U.S., and it was originally served with a crispy crouton. It is known for its base of rich, buttery broth packed with caramelized or braised yellow onions. The topping of crispy bread and melted cheese is an absolute must!

This style can sometimes get confused with standard onion soup; the British version has yellow, red, and white onions along with shallots and fennel. You may also find it with various types of broths and usually has sage included.

How to prep the onions

This recipe calls for braising the onions in the oven for three hours instead of laboring over caramelizing them on the stove, noting that the low and slow braise imparts a much deeper flavor.

How to Make French Onion Soup From Scratch

How to Make French Onion Soup in the Slow Cooker

While it will not be quite as rich and flavor-packed, it will still be delicious! Here is what to do:

More of my favorite soup recipes:

Stay cozy and warm with this amazing French onion soup! With a combination of beef and chicken stock, oven-braised caramelized onions, French baguette, and Gruyere cheese, you’ll want to eat this all winter long. 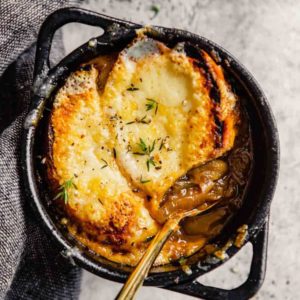 Yield: 6 servings
Prep Time: 15 mins
Cook Time: 4 hrs 30 mins
Total Time: 4 hrs 45 mins
Bubbling gruyere cheese and crispy baguette top a brothy base full of perfectly braised onions in this showstopping French onion soup recipe. Whether you're making it to warm up on a cold day or for a delicious date night in, this feels luxurious and cozy each and every time.
4.71 (24 ratings)
Print Pin Rate