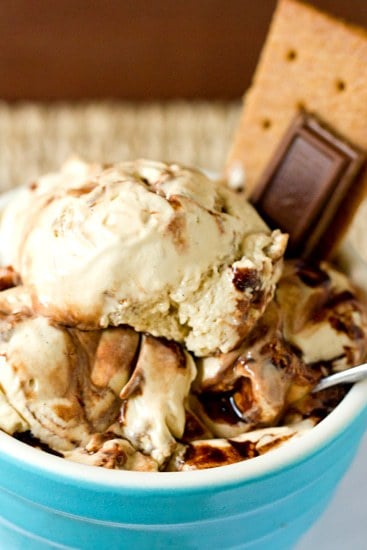 You didn’t think that I would make innocent-looking graham crackers without providing you with something else to do with them, did you? It’s summer, I obviously have s’mores on the brain, and so I set about making some s’mores ice cream. I’ve seen many versions of it over the last few years, but most of them all took the same general route – chocolate ice cream, mini marshmallows and some crumbled graham crackers. All of the components are there, but it’s missing one key element. Toasted marshmallows. S’mores aren’t just about plain old marshmallows… you’ve got to get them nice and toasty (I usually let mine catch fire and huff and puff to blow it out), and only then do you add them to your graham cracker and chocolate sandwich. They melt and ooze, but have that burnt, crisp exterior. This version of s’mores ice cream starts with a toasted marshmallow ice cream base, to which I added a fudge swirl for the chocolate component and chopped up pieces of my homemade graham crackers. Now this is s’mores ice cream nirvana. 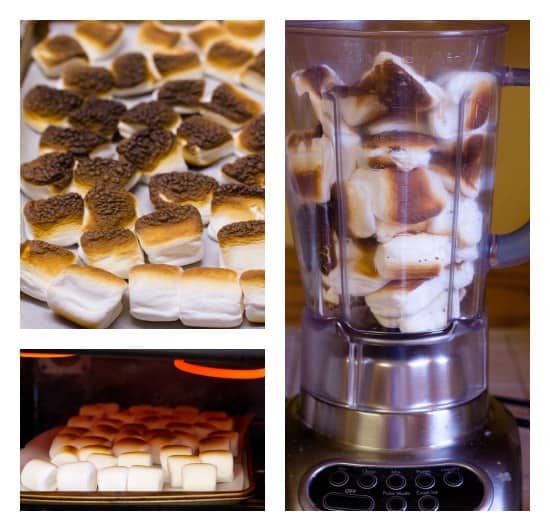 I’ve been thinking about this ice cream ever since seeing toasted marshmallow ice cream over on Tracey’s blog a few months ago. It made my ears shoot straight up, my eyes widen and my tongue drool just a little. I loved the idea and tucked it away on the back burner for when summer rolled around, since summer makes me crave s’mores like nobody’s business. I revisited it again recently and was trying to figure out how I could turn the ice cream into one massive s’more. I gave it some thought and decided to use the toasted marshmallow ice cream as a base, swirl in a fudge ripple, and throw in big chunks of graham crackers.

I took my first spoonful of ice cream straight from the bowl when it finished churning and I almost fell over. The flavor of toasted marshmallows is so distinct and delicious – there is absolutely no questioning what you’re eating; the flavor shines through the ice cream. By the time the graham cracker chunks were mixed in and the fudge swirl layered on, I had exactly what I had hoped for – the most insane s’mores ice cream I could have ever imagined. I was floating on a cloud of toasted marshmallows. Your summer NEEDS this ice cream! You’re going to love it! 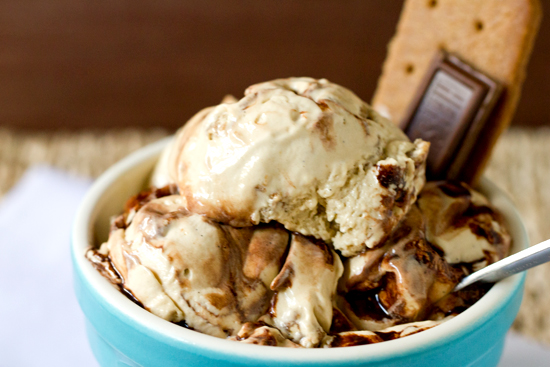 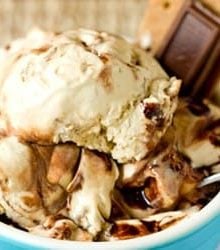 For the Toasted Marshmallow Ice Cream:

For the Fudge Swirl: