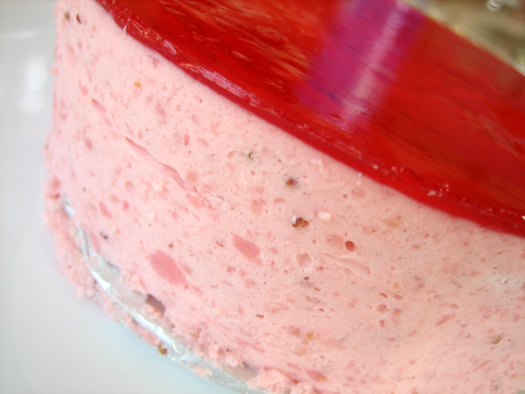 I joined the Daring Bakers in September 2007 with my inaugural recipe being Cinnamon Rolls & Sticky Buns, but prior to my joining, the group had already made 10 fabulous, daring recipes. It is my goal to eventually tackle all of them, as well as the few that I had some trouble making since I joined. When my friend Annie said that she was interested in making the Strawberry Mirror Cake that was chosen by Culinary Concoctions by Peabody in July 2007, I figured it was a great way to jump start my way to completing all of the ones I had missed. And true to Daring Baker form, this was certainly a challenge! But I stuck it out, and it was definitely worth it, both for the sense of accomplishment and flavor of this wonderful cake. 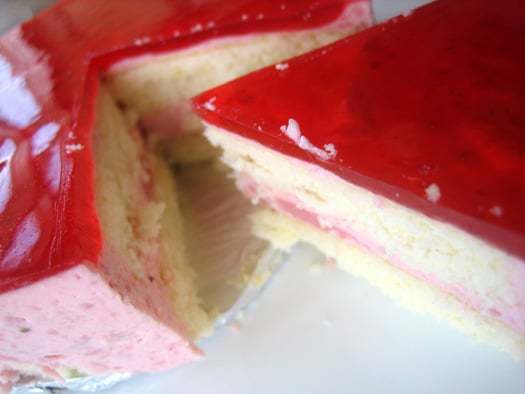 Things started out just fine when I made the cake, but the problem arose with the Bavarian cream. As I found out, there is a very small window of time between the “thickened to the point of softly whipped cream” and “turned into jello”. I waited perhaps a minute too long to fold my whipped cream into the cream/strawberry puree/gelatin mixture, because all I got were clumps of almost solid jello. I was frustrated. I swore. I banged things. My poor dog came running into the kitchen to make sure everything was okay. At that point I had had enough in the kitchen, saved the cakes, and decided to forge ahead in a few days.

Yesterday I strapped on my apron and tried again! I scaled the recipe and used my 4.5″ springform pan figuring if it was another bust I wouldn’t waste a huge amount of ingredients. I’m happy to report that this time I had great success, and would advise anyone who tries this to definitely err on folding the whipped cream in earlier as opposed to waiting. Everything else went just fine, although I didn’t have quite enough room for a large layer of Bavarian cream on the top of my cake, but no matter, it came together perfectly. We thought the cake itself was a little on the dry side (which may have been due to my freezing them from the original attempt), but the strawberry flavors in the cream and mirror were fabulous, and hey! I made homemade Jello! Who would have ever imagined? :)

This was one of the more complicated recipes I have tackled, but would encourage everyone to give it a try! Creating something like this, even with missteps, leads to such a sense of accomplishment! 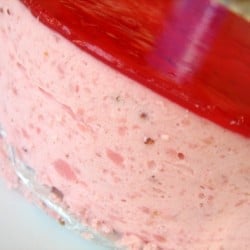 For the soaking syrup:

For the strawberry Bavarian cream:

For the strawberry juice:

For the strawberry mirror: