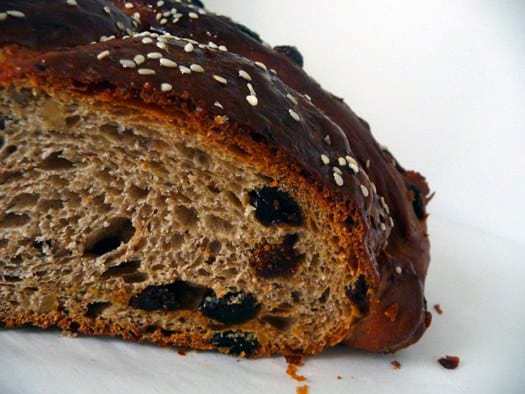 This recipe is a variation on the Greek Celebration Bread (Artos).  I was immediately drawn to the Christopsomos because it appeared to be, in essence, the bread form of the Cucidati cookies I made a few months ago. The traditional Italian cookies are filled with ground figs, raisins, dates and walnuts, and flavored with orange and cinnamon. Certainly, a striking similarity to this bread and not surprising since Italy and Greece often share culinary influences and traditions. 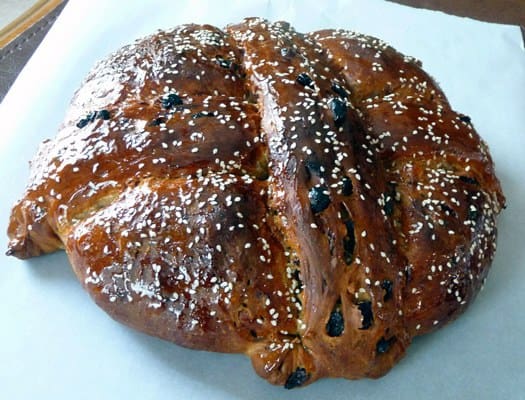 This bread was absolutely fabulous and I have already put it on my holiday baking list. It would be perfect for Christmas morning, or to have for any guests that might drop by. The combination of spices in this bread smells amazing as the dough mixes, and once you put it in the oven you’ll think that it’s Thanksgiving. Such a warm, spicy aroma that is reminiscent of the holidays.

I wanted to take a moment to talk about the glaze on this bread. In the book it is listed as optional, but I really feel that it makes the bread. The mixture of a simple syrup, honey, almond, and orange really accentuates the flavors that are found inside the bread. I also love the sprinkling of sesame seeds on top of the bread – it adds a contrasting texture and a great complementary flavor. I was on the fence about doing the glaze and at the last minute decided to make it, and am so glad that I did. 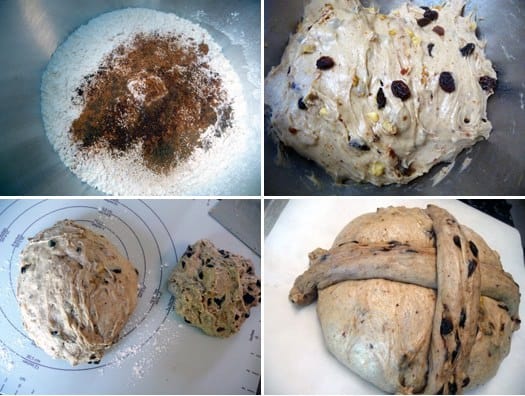 Notes on the recipe:
♦ The recipe for poolish makes more than you will need for this bread, so you can make the whole recipe and save it for another bread recipe, or you can cut it in half.

♦ While kneading the bread in my Kitchen Aid mixer, I initially thought that the dough would be too wet, but resisted the urge to immediately add more flour, and let it go for 10 minutes. It turned out perfect.

♦ The first rise took about 2 hours.

♦ I shaped the loaf into the decorative cross, although I think I may have over-proofed the boule since I made 12″ long strands (instead of the 10″ the recipe calls for) and they still weren’t long enough to get a good coil at the ends. In addition, the boule deflated slightly with the strands on top. 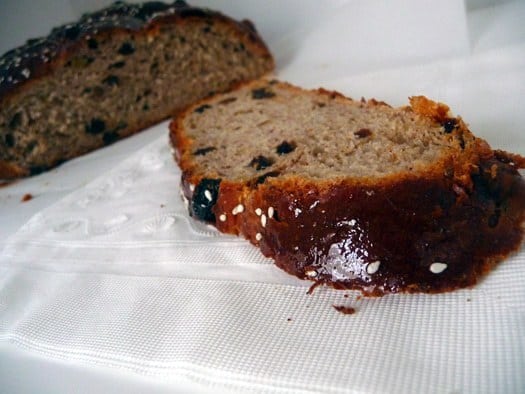 More Peter Reinhart recipes:
Bagels (Will be making a new variation of these for next week, be sure to check back!)
Classic White Bread
Cinnamon Rolls
Lavash Crackers 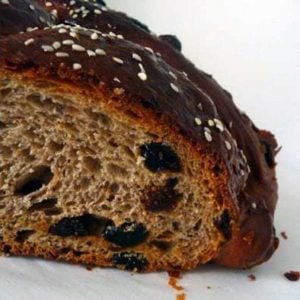