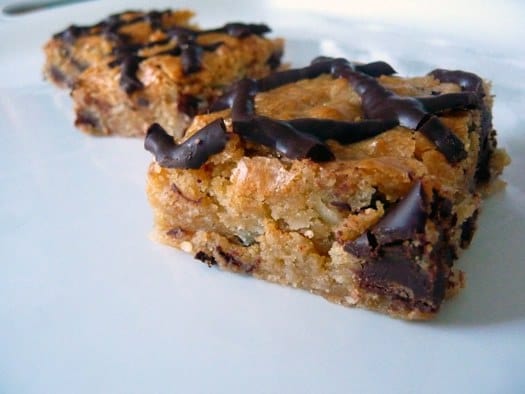 At some point I missed the memo on blondies. When did they become popular? They popped up on my radar sometime last year, and even then, I didn’t feel the urge to scurry off into the kitchen to whip them up. Slowly though, it seemed their popularity was picking up steam. I started to see a lot of different varieties on other blogs. I saw an episode of Throwdown with Bobby Flay when he tried to one-up the blondies by Sugardaddy’s. I still didn’t see what all the fuss was about, but I added them to my Top 100 list and figured I would give them a try one day. Lo and behold, that day finally came. Annie asked me if I wanted to bake something together being that it had been awhile since we made the Peanut Butter Torte, and these were one of her suggestions. Since I had been dragging my feet on trying them, I thought it was a good selection. I was even more convinced after I tried one – they taste very much like Girl Scout Samoas cookies! 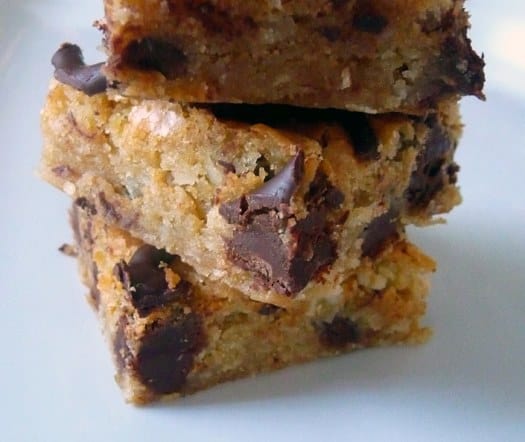 For those that are as in the dark as I was, a blondie is basically a brownie minus the chocolate. While brownies have a common base of melted butter, granulated sugar and cocoa powder, blondies are created with melted butter and brown sugar. The result is a rich toffee-like flavor. Mixing the butter and brown sugar creates such a fabulous aroma that it will make you want to eat the batter by the spoonful. I’m not kidding. Be prepared to muster up some serious willpower. The flavors in these blondies are fabulous – the batter is rich, the coconut slightly sweet and adding a chewy texture, and the chocolate with the perfect amount of, well, chocolateness.

I was a huge fan of how the batter smelled when being mixed together, and loved the crisp, crackly, brownie-like top that the blondies had when they came out of the oven.

Some notes on the recipe:

– I used Ghiradelli bittersweet chocolate chips, which are larger than regular chips, so more like a “chunk”. Plus I like dark chocolate.
– You don’t need to break out a mixer – I made these with one bowl and a large spoon.
– To get clean cuts, use a bench scraper

to cut straight down. No slicing or sawing with a knife, perfect edges.
– I am now a blondie convert. 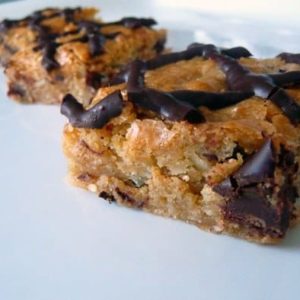