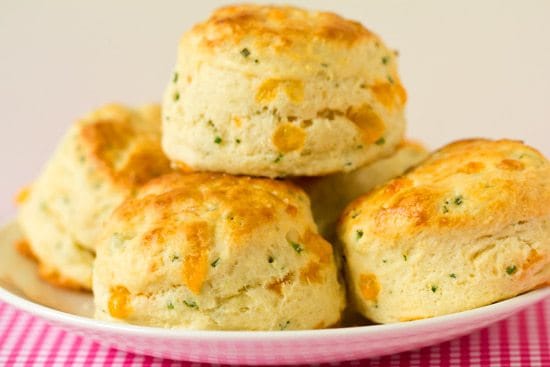 I think I must have been bitten by the biscuit bug this week. I fail to think of any other explanation for the sheer volume of biscuits that I have consumed since Monday. It all started innocently enough with a midday trek to deliver my Chief Culinary Consultant’s parents to the airport. On the way back, we decided to hop off of an exit and do a little shopping. We landed at Lowe’s, and after a short time of staring at aisles and aisles of lumber, we realized that we were starving. Across the parking lot sat Cracker Barrel, which made our lunch decision a no-brainer. Even though it was 2:30 in the afternoon, we both somehow decided that a massive breakfast platter would make the perfect lunch. Complete with biscuits, of course. That started the biscuit spiral. Back at home, I was staring at a chunk of cheddar cheese that was leftover from my second go-round with the cheesy corn dip, chives that I had bought for baked potatoes a week prior and more jalapeños on my jalapeño plant than I currently know what to do with. Enter another round of biscuits! 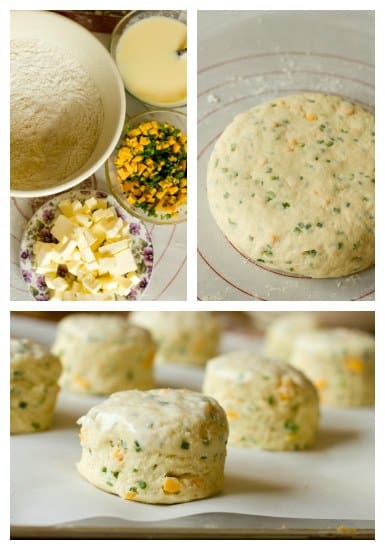 I have a confession. I’m a little crazy when it comes to how I organize things. Crazy as in, totally “uptight”. I was the teenager who never needed to be told to clean their room. I was also the lunatic who would remove every.single.CD from my CD case when I bought a new one so I could insert it into its proper alphabetical location. Seriously. I now have all of my cookbooks organized by type – reference, cooking and baking – and then subcategories like region, type of cooking, type of baking, etc. Even worse, I actually like to organize. Eek!

Earlier this year, I realized that my stack of food magazines and cookbooks with doggy-eared pages was getting seriously cumbersome, plus I was forgetting what I had seen that I wanted to make. When I wanted to find something, it took forever. So, I started cataloging all of the recipes I wanted to try from magazines and cookbooks in a spreadsheet. I made tabs for different types of food (appetizers, cookies, cake, main dishes, side dishes, ice cream, etc.), so I can now enter the recipe name and the book or magazine and page number. It makes it unbelievably easy to browse through recipes I’ve already bookmarked somewhere. I still have tons of old magazine and cookbook recipes to add to the spreadsheet, but it was incredibly handy when I was able to locate a recipe with ‘cheddar’ and ‘chives’ in the title in mere minutes instead of sitting in the middle of the floor amid a sea of opened books and magazines trying to find something. 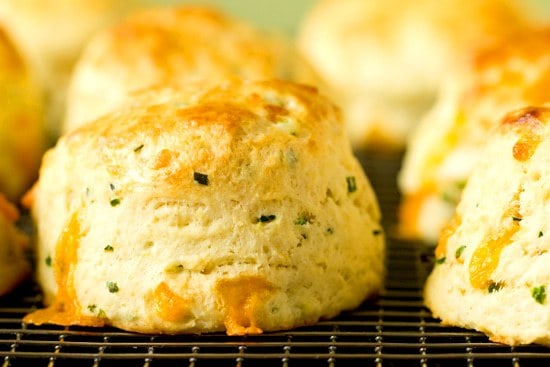 I had always been a purist when it came to traditional buttermilk biscuits, but a couple of years ago I started dabbling with some mix-ins and especially loved the bacon, onion and cheddar biscuits that I discovered. This biscuit recipe more resembles the latter, with the addition of an egg to help keep the biscuits bound together given all of the extra ingredients used. The result is an incredibly tender biscuit that is full of little pockets of cheddar cheese and just enough jalapeño and chive flavor to give it a little kick. These are great on their own, with a little butter and as a side for any number of meals. We had some with stuffed summer squash for dinner, and then I had a plain one for breakfast the next morning. I think hot from the oven these would be fabulous sliced in half with a sunny-side up egg over top. Throw on some bacon and you’ve got my kind of breakfast! 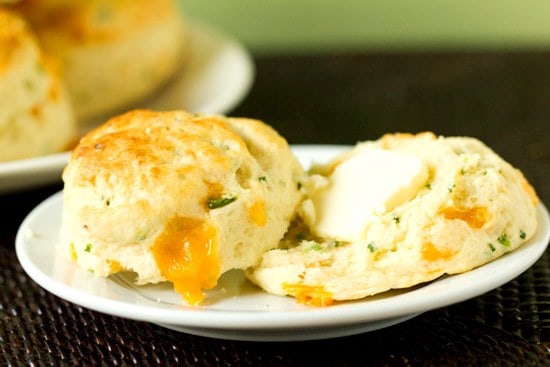 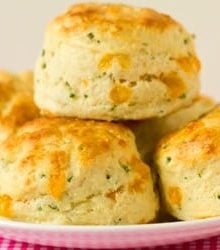