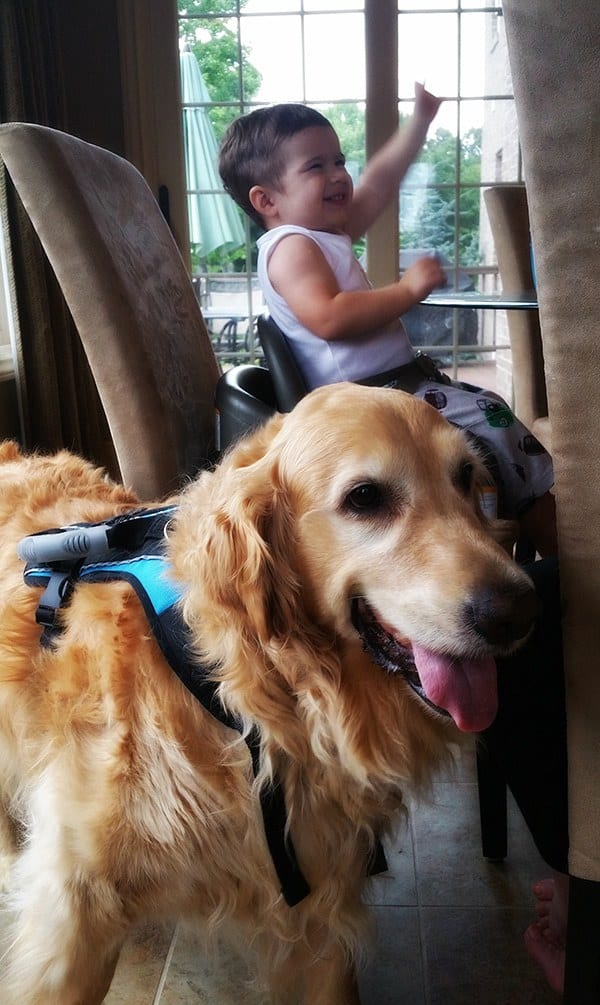 Thank you to everyone who has asked about Einstein and offered up good thoughts and prayers for him. It’s been quite a long week for us. He had a great therapy session last Friday afternoon and we immediately started seeing improvements over the weekend – he began sitting up and standing up on his own, and being able to lay back down on his own, much steadier on his feet, hardly any knuckling while walking, and he even walked from his dog bed near our entryway over to the kitchen while Joseph was eating dinner on Wednesday without any issues (they both love mealtimes!).

Less than 2 hours after we snapped that picture above, he had a seizure while I was putting Joseph to bed. My husband rushed him to the animal hospital while I waited for my mom to come and stay with Joseph. After a complete blood workup, chest x-rays, an abdominal ultrasound, and finally an MRI, our worst fears were realized late yesterday… He has inoperable brain cancer that has spread to his lungs. The neurologist put him on a steroid to reduce swelling, alleviate his symptoms and allow him to be comfortable and happy. We get to bring him home today, but the prognosis is not good… the neurologist said that six months would be the very high end of expectations.

My heart is broken into a thousand pieces. He is just the best dog, and this happened so suddenly with seemingly no warning signs. I really thought I had four or five more years with him. I just want to hug him and never let go.

I had a bunch of other things lined up to talk about in today’s Friday Things, but they all seem trivial given the news we got yesterday, so I’ll save them for next week.

Thank you all for loving Einstein as much as we do ❤️