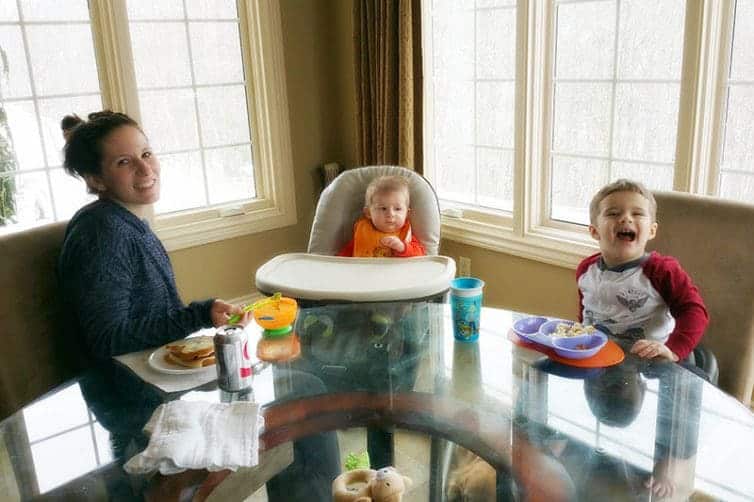 1. Dominic is in the high chair and we’re starting solids! He pretty much just wants to stare at Joseph the entire time (and Joseph was SO excited to have him in the high chair next to him), but when I can get him to look at the spoon, he takes eager bites :) We’re just starting avocado this week, but I’m sure I’ll be busting out the steamer, food processor and ice cube trays soon!

These two loving staring and smiling at each other and it makes my heart so happy. When Dominic is in his activity chair/bouncer, Joseph stands over him and waves and they both giggle and Dominic goes crazy bouncing!

2. Happy St. Patrick’s Day! Are you doing anything special today to celebrate? What are you eating?!

3. Were you in the blizzard path this week? They were calling for us to get 4-8″ of snow and when we woke up Tuesday morning, we had… nothing. As in, not even a dusting. Like, ZERO snow fell. I was so looking forward to a big snowstorm and taking Joseph outside to play, womp womp. (Then it snowed off and on all morning on Wednesday, which left us with no much snow, but crappy roads.)

4. Do you remember my “My 100“? It was my big baking bucket list that I started yearssssss ago not long after I began the site. I crossed off quite a few of those, but I’m thinking of reviving the list and expanding it to a new one. Maybe tackling items could be a project we do together? What do you think?

5. Speaking of special projects, I’m loving the current series on Pinch of Yum, “Feeding a Broken Heart“. Not only is it a wonderful reminder to think of those that might need a shoulder to lean on, but the recipes so far have sounded amazing – true comfort food.

6. So, there’s an MLB pitcher that’s mad because cupcakes have too much frosting. What the what?! You know I love a high frosting to cupcake ratio, but what do you think? Agree or disagree?

7. For no reason whatsoever, I’m totally craving brownies. I think I see a pan in my future.

8. It’s March Madness! Did you fill out a bracket this year? I did again, but as always, I have no idea what I’m doing since basketball is one sport I don’t actually follow. Just cross my fingers!

9. I am so thrilled that Homeland is back to its fantastic ways; after another slow start to the season, it’s pulled me the whole way back in. And The Americans? Loving it. If you haven’t watched it, definitely catch it on Netflix – I think it’s one of the most underrated shows on TV.

10. TGIF! I hope you have a comfy weekend! (Duke got a new dog bed for downstairs!)