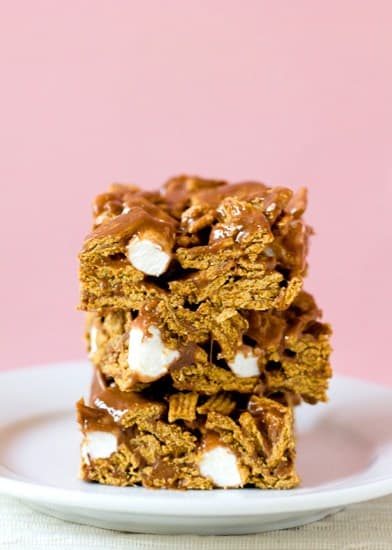 Going through my mom and my grandma’s old binders of recipes is like going through a culinary time capsule. There are yellowed newspaper clippings… index cards that have been splattered with oil, flour and chocolate… lists of ingredients with absolutely no method… recipes that start with “Great Aunt Margie’s” or “Millie’s”. The word “oleo” appears more often than not, and there are tons of clippings from old food packages. One of my latest re-discoveries is this recipe for s’mores bars made from Golden Grahams, which originally appeared on the back (or side?) of the cereal box.

When my sister and I were kids, all of the fun-looking cereal was a big-time no-no in our house. That meant no Lucky Charms, no Captain Crunch, no Cocoa Puffs. No to just about everything a little kid whines for in the cereal aisle. The discipline that my parents must have had! Once in a while we were allowed to venture outside of Cheerios, Total and Rice Krispies, and there were two treats that would appear in the cereal cabinet: Golden Grahams and Frosted Flakes. (As an adult now, I would totally classify Frosted Flakes as a super sugary cereal, but as a kid, I was happy it was allowed into the house!) I think they showed up because my dad loved both of them, and as a result, I became a huge fan of both. To this day they are my favorite “splurges” when it comes to cereal. For as much as I love Rice Krispies treats of every shape, size and flavor, it’s incredibly natural to pair Golden Grahams with marshmallows and chocolate for a super easy, delicious s’mores bar. 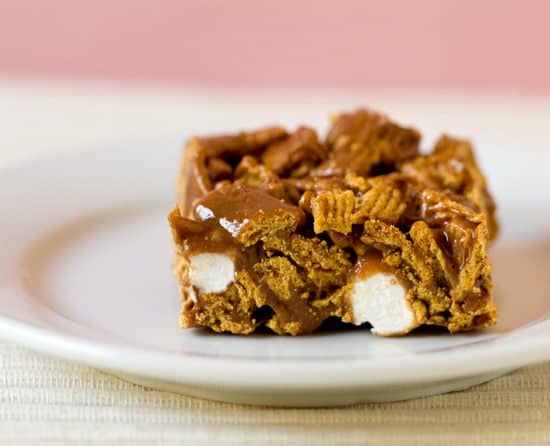 These are made in the exact same fashion as Rice Krispies treats, only instead of melting the butter and marshmallows in a pan on the stove, you microwave them along with chocolate. The original recipe calls for semisweet chocolate chips, but since these are s’mores bars, I thought the chocolate needed to be consistent with actual s’mores bars made over an open flame, which means using good old-fashioned Hershey bars. Between the graham cracker-flavored cereal, tons of marshmallows and the Hershey bars, these are an incredible recreation of the s’mores flavor… minus the burnt marshmallow. I always burn my marshmallows! 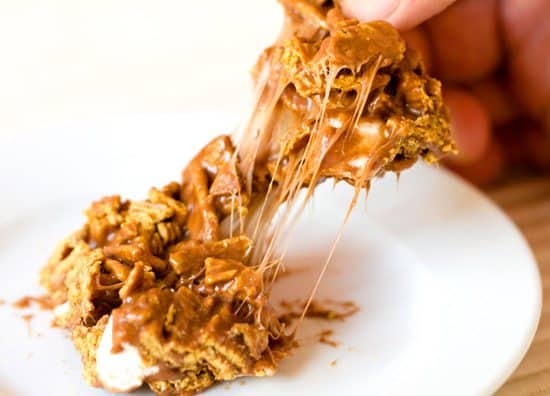 One year ago: Zucchini Pineapple Bread
Two years ago: How to Make Homemade Ice Cream Without an Ice Cream Maker
Three years ago: Chocolate-Dipped Coconut Macaroons[/donotprint] 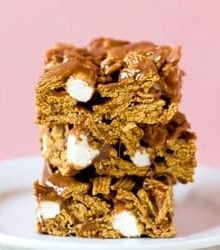