When I saw that winoesandfoodies.com was hosting the LiveSTRONG blogging event, I knew immediately that I wanted to participate. The only problem was trying to figure out what I wanted to make that was yellow! This blogging event is something a little extra special in the blogging community and was created to remember how cancer affects each and every one of us, to remember those loved ones that are no longer with us, support those still fighting, and celebrate with those who have won the fight.

The A Taste of Yellow blogging event invites food bloggers to make yellow food (and blog about it) to show our support for LiveSTRONG Day 2008, which is on May 13, 2008. My entry is submitted in memory of my dad, David, who lost his battle with cancer of the blood on April 4, 1999.

His story and Cheddar Corn Chowder after the break…

It goes without saying that cancer has had some type of impact on almost everyone in this world. The impact that it had on my life started in the fall of 1997 when I was a senior in high school (my sister a sophomore) and my dad sat us down one night and said he had to talk to us. In typical teenage fashion, the first words out of our mouths were, “Are we in trouble?” That would have been a much better alternative. He went on to tell us that during a routine blood workup for his cholesterol the doctor discovered some abnormalities in his white cell counts. After some more testing and meeting with a couple of specialists, he was diagnosed with Chronic Lymphocytic Leukemia (CLL). He assured us that everything was fine, he didn’t even feel sick, and the doctor said his was a very early case and that typically the disease progressed slowly and he wouldn’t need treatment for a number of years. Okay, that’s not so bad, we could handle this.

Fast forward about six months… routine bloodwork was showing that my dad’s disease was progressing far quicker than normal and he was placed on a bone marrow transplant list. Neither of his two brothers were matches, and within a few months my dad decided to do an autologous (donate his own marrow and have it cleansed) transplant. This ended up not working out because after undergoing chemo and radiation the disease still had a hold of 2/3 of his once-healthy cells. By January 1999 an unrelated donor had been found and my dad was off to Boston (Brigham & Women’s Hospital) to undergo the transplant. My mom and grandparents went with him; I was in college and my sister was in high school and we stayed back at our respective schools. The transplant actually went perfectly – everything was going as well as doctors could have hoped and within 8 weeks he was discharged. Getting ready to return home and out of the hospital, my dad woke up with a high fever. Back to the hospital he went, and he would never get back out.

A result of the bone marrow transplant, my dad contracted graft vs. host disease, which was basically his body rejecting the new marrow. Once that was thought to be taken care of, his weakened immune system couldn’t fight a lung infection, which is eventually how he passed.

My dad touched more people than any of us probably can comprehend. I watched his friends cry like babies at the funeral home, and stood and received people for hours while a line snaked outside. We received letters from people we had never heard of, telling us how wonderful of a man my dad was and how he touched their lives. A day doesn’t go by that I don’t think about my dad in some way. I miss him and hope that he is proud of me and the life I have built.

And now the food! This recipe comes from Annie of Annie’s Eats, who is a great friend of mine and also has a heart-wrenching story of how cancer has affected her and her family, three times over. She makes some incredible dishes, so if you haven’t checked out her blog before head on over there and check it out! Her chowder definitely looks better than mine (I haven’t really gotten good at photographing soup yet!), but this tasted fabulous. It was my first time making corn chowder, and you really can’t go wrong with an Ina Garten recipe! It was wonderful. 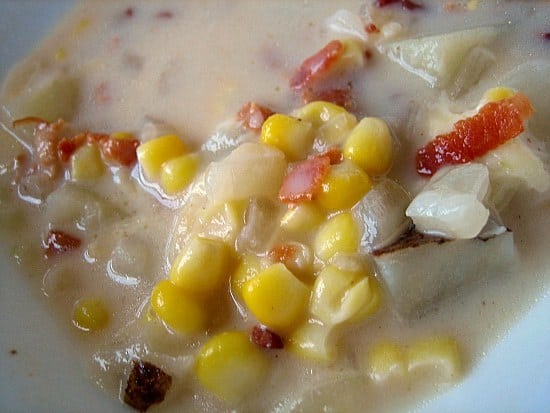 A delicious chowder that is packed full of flavor 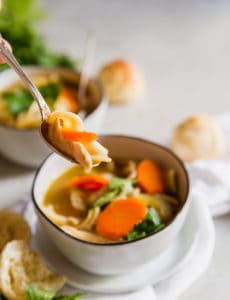 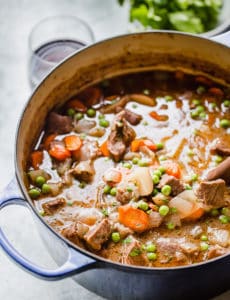 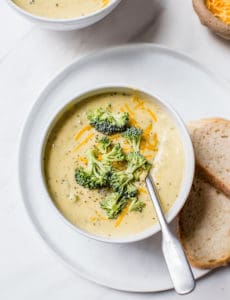