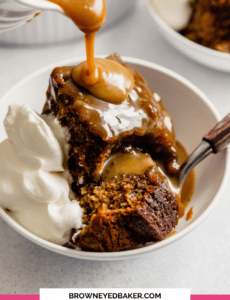 This traditional English sticky toffee pudding has the texture of a sponge-like cake that is super moist and full of sweet dates. The cake batter is baked on top of toffee sauce, then even more toffee sauce is poured on top (that toffee drizzle is a holiday gift of its own!). Serve it with whipped cream or vanilla ice cream for a truly unforgettable dessert! 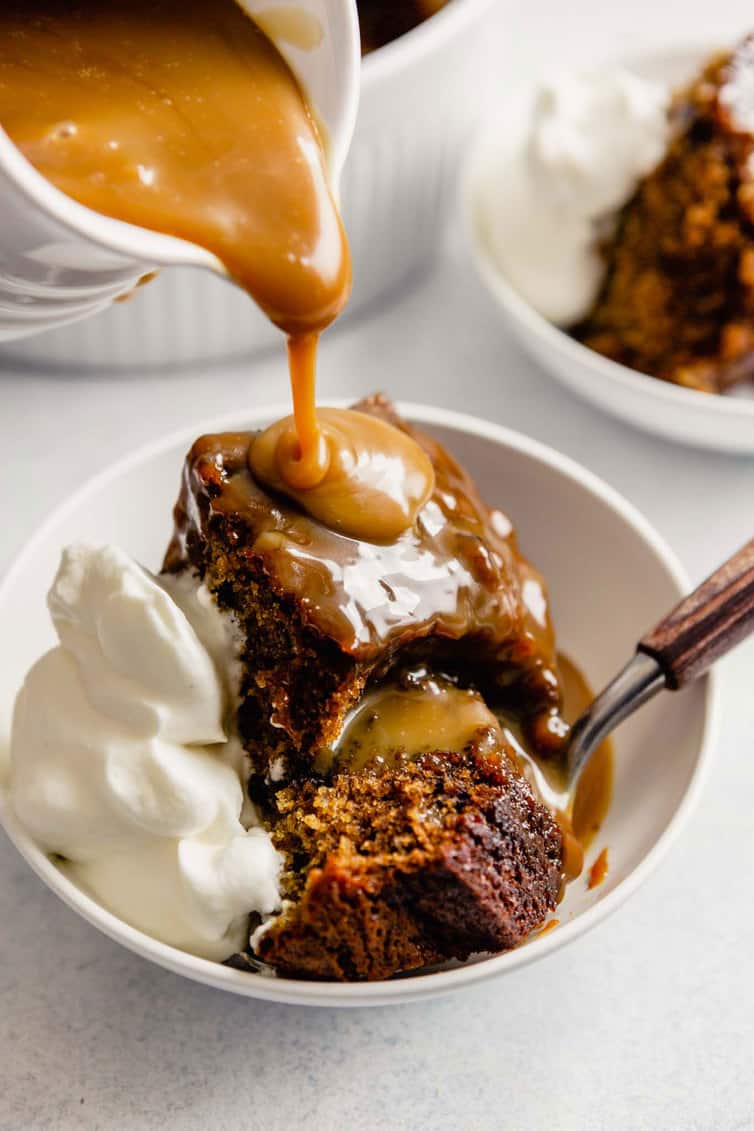 I was first introduced to this English (and Canadian) Christmas dessert about a decade ago when I stumbled upon a newspaper spread about holiday food and there was an article dedicated to different types of puddings (all of which I want to try), and the recipe for the sticky toffee pudding jumped right off the page at me.

As soon as I saw it included dates, I dashed off to the kitchen to give it a try (I LOVE dates!). And not surprisingly, I looooooved the sticky toffee pudding! 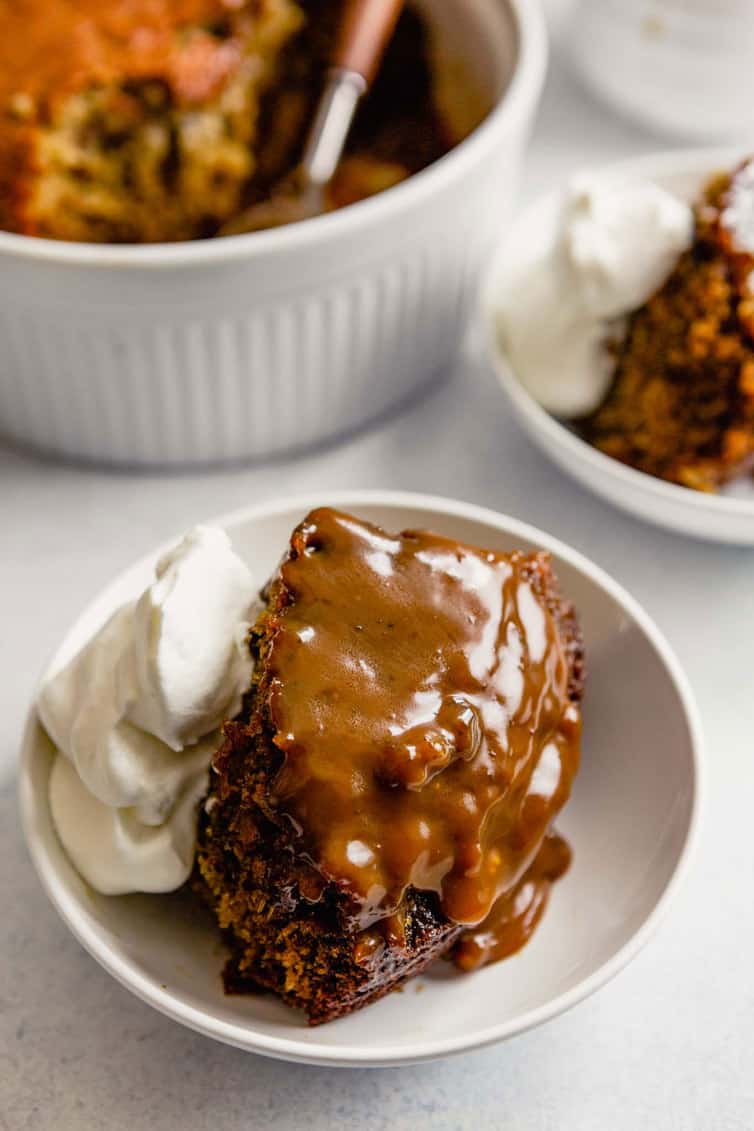 Pudding pans: How to choose and how to prepare

Some puddings are prepared in Bundt cake pans, while others are in a standard baking dish. In this one, I recommend an 8-½ inch porcelain soufflé dish (this has about a 2-quart capacity); its tall sides keep the pudding crunchy and rich. A similar-sized baking dish would also work, but a porcelain option is the best in terms of the way it conducts heat and produces a crusty exterior and super moist interior.

Grease the pan with a light layer of butter or non-stick cooking spray. Whatever you grease it with, be sure that you have kept the coating very light, so that the butter or oil does not soak into the pudding. Use a paper towel to blot up any excess.

How to make sticky toffee pudding step by step

Though traditional “puddings” are boiled or steamed, sticky toffee pudding has evolved and is now traditionally baked. I am a huge fan of this because the crisp edges and structure this cake gets from the oven are absolutely heavenly. I fell in love with how straightforward this recipe is, and how utterly delicious it is! 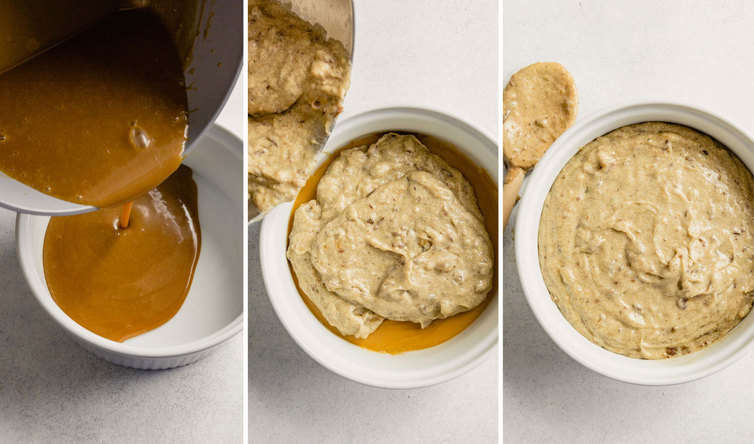 There are so many kinds of traditional puddings, you may find yourself inspired once you start making them! A sticky toffee pudding like this is a classic, but you can spice it up a bit pretty easily:

Making ahead and storage tips 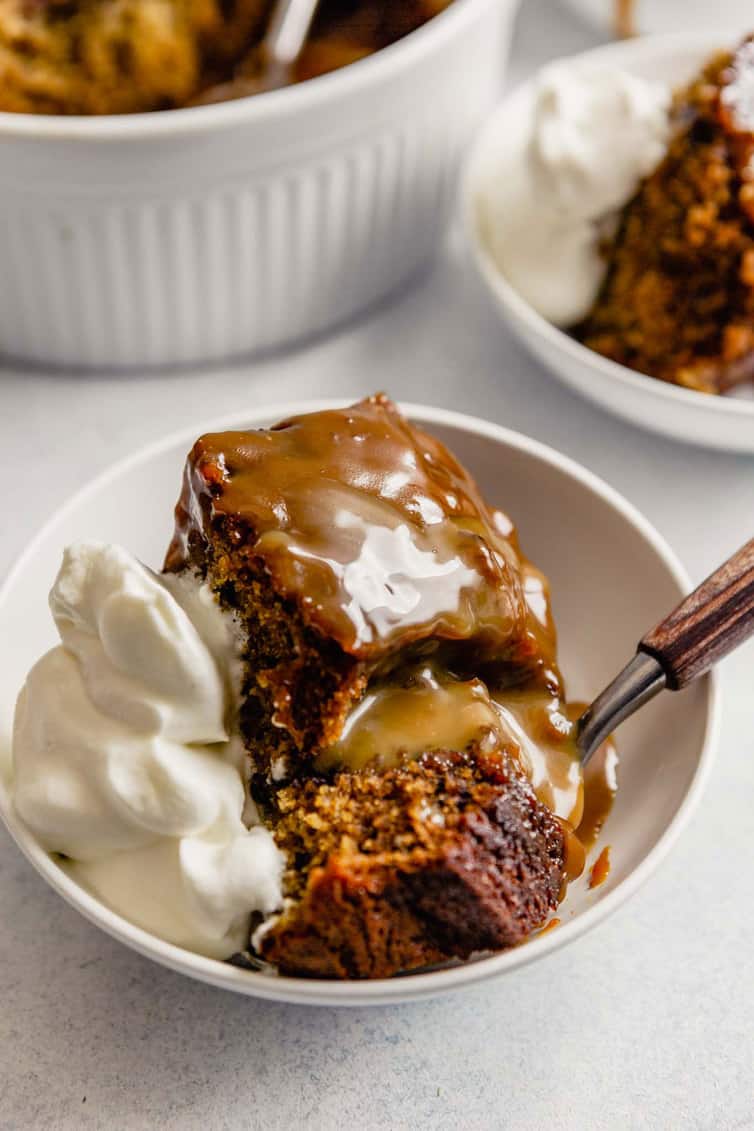 On a toffee or pudding kick? Me too! Check these out:

I would absolutely love it if you tried this sticky toffee pudding for dessert (for the holidays or ANY day!); if you do, please stop back and leave a rating and let me know how you liked it! ENJOY! 😍 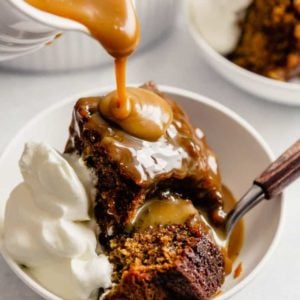 Yield: 6 to 8 servings
Prep Time: 30 mins
Cook Time: 50 mins
Total Time: 1 hr 20 mins
This traditional English sticky toffee pudding has the texture of a sponge-like cake that is super moist and full of sweet dates. The cake batter is baked on top of toffee sauce, then even more toffee sauce is poured on top. Serve with whipped cream or vanilla ice cream.
4.55 (121 ratings)
Print Pin Rate

For the Toffee Sauce: