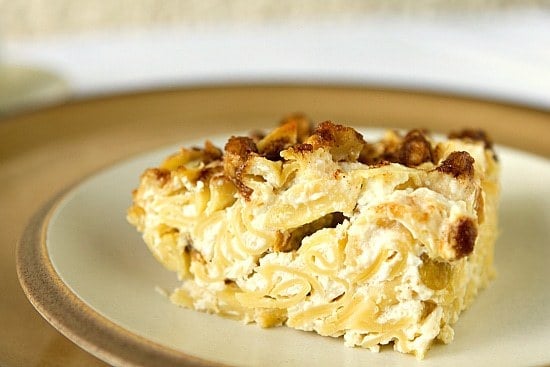 This kugel is the follow-up post to the Honey Cake from yesterday, the two recipes that I contributed to our little Rosh Hashanah dinner celebration (non-Jewish folk that we are). The first time I had ever seen or heard of noodle kugel was while watching an episode of Barefoot Contessa. I don’t remember what else Ina made in that episode, but the kugel definitely struck me. There were noodles, but they were baked in a creamy mixture casserole-style and it was kind of sweet. I honestly didn’t know what to make of it. I was intrigued, but not sure that I would actually like it. I tucked it away inside the foodie portion of my brain for another time. Well, after seeing noodle kugel on a sample Rosh Hashanah menu, I knew I definitely wanted to give it a try after remembering that episode. I am SO glad I did because this one insanely fabulous dish. 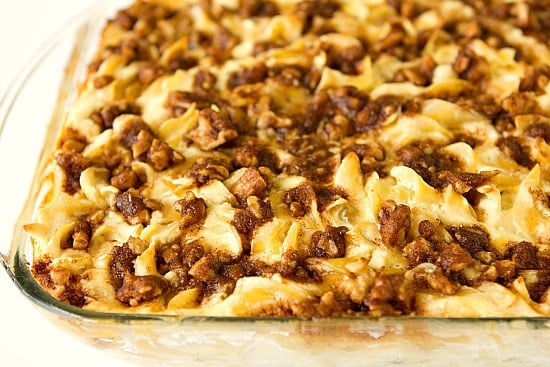 I envisioned that this might be a bit like a bread pudding, but it’s even better than that, believe it or not. While assembling it and mixing together the cottage cheese, cream cheese, sour cream, vanilla and eggs, it dawned on me that the mixture was suspiciously similar to a cheesecake batter. I think this is basically a cross between a sweetened baked macaroni and cheese (but firmer, not gooey) and a noodle-laced cheesecake. So in summary, one of the most delicious things I’ve come across in a long, long time.

We originally ate it at room temperature with our dinner, and then busted out some chilled pieces from the refrigerator the next day, and… bam! Dessert! Very, very similar to cheesecake. With noodles ;-) The buttery brown sugar and walnut topping is to-die-for. I might even double it next time so it covers most of the top.

I thoroughly enjoyed trying new and different ethnic foods while getting a taste of Rosh Hashana this week. Love exploring new tastes! 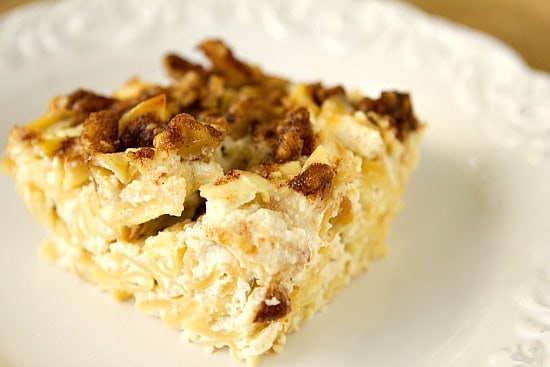 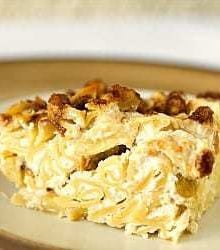