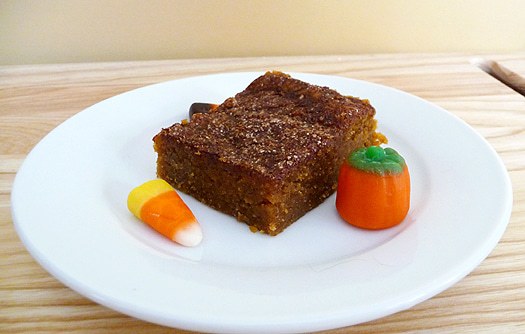 Or pumpkin blondies. Or pumpkin brownies. Truthfully, my intent was for these to be pumpkin blondies without a leavening agent so that they would have more of a dense, brownie texture. However, upon eating one, I really think that the flavor and texture is most similar to a pumpkin pie, minus the crust and with a cinnamon-sugar mixture sprinkled on top. Not too shabby a result, if I do say so myself. They are actually very reminiscent of the consistency and texture of the Blackberry Pie Bars that I made back at the beginning of summer. You could toss that crust under this recipe and be even closer to a true pie bar! 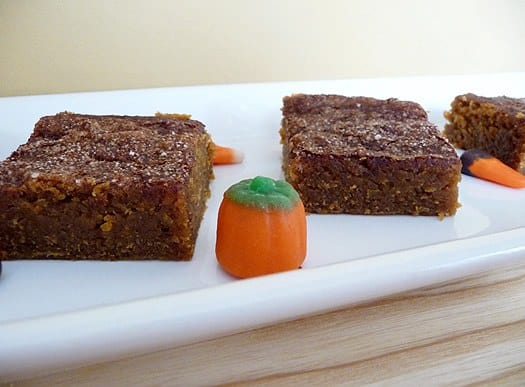 I started my search for this recipe by looking for pumpkin blondie recipes – I wanted something that had the seem feel and texture of a brownie, and not cakey or something like a cookie bar, so I wanted to eliminate any baking soda or baking powder. My search turned up empty. So I set out on my own creation. I took a few of my favorite brownie recipes and compared the ratios of flour to eggs and chocolate, knowing that the pumpkin would account for some of the eggs and chocolate in terms of liquid in the recipe. And this is what I came up with. It’s definitely not cakey, nor does it have that fudgy texture that most brownies have, but rather they really do taste like pumpkin pie!

And, on a side note, I finally broke down and bought a bag of candy corn. I try to not even have a bag in the house because I can’t stop eating it! I must be doing a good job at eating a pretty clean diet because only a few pieces of candy corn and I was more than ready to be done. Success! 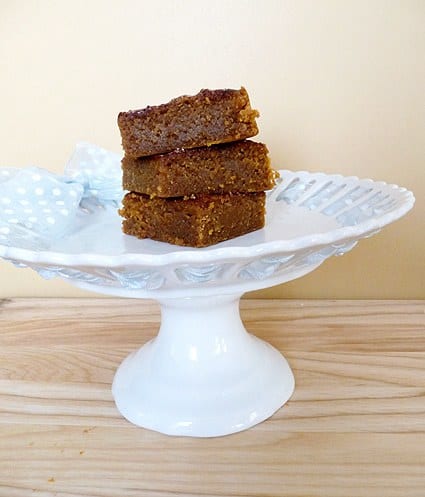 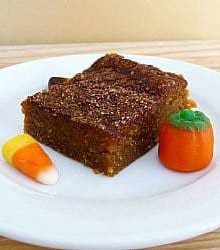