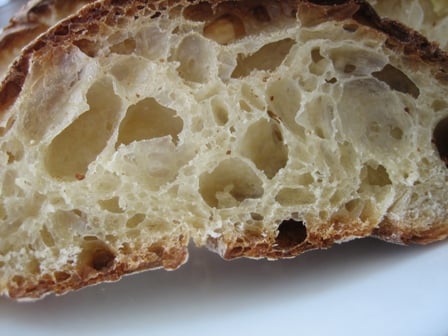 I noticed a few weeks ago that a new food blogging group had formed – the Bread Baking Babes. They tackle a new type of bread each month and then blog about it and encourage readers to give it a shot within the following week to become a Bread Baking Buddy. The first month of BBB was hosted by Baking Soda over at Bake My Day! and the introductory bread was the Maggie Glazer’s Royal Crown’s Tortano, which is a rustic bread and a signature of the Royal Crown Bakery in Brooklyn, NY. I’m not sure if I’m a “Buddy” since it took me more than a week to make this, but I wanted to thank Mary over at The Sour Dough for being patient with me as I asked a ton of questions through email, and also for posting a bunch of pictures of the process. These helped me tremendously, and in hind sight I should have done the same, but if you attempt this bread definitely check out Mary’s post to get an idea of what the dough should look like at each stage. 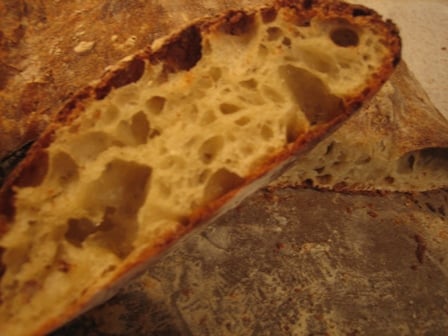 My first attempt to start the preferment didn’t go very far, as after I woke up I realized that nothing really happened and my yeast was probably bad (the jar had been around for quite some time). I went to the store and got some brand new yeast and started over. I can’t tell you how glad I am that I stuck with it, because aside from being an amazing loaf of bread, I also got to experiment with a different type of dough and new techniques. 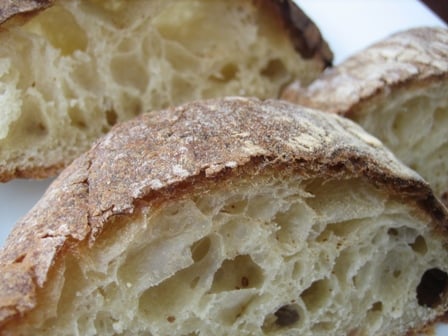 To say that this was a wet dough was putting it mildly! I have never seen dough actually look like a liquid mass before coming together. I crossed my fingers that I was moving along the right way and was so excited after each step to realize that was was supposed to happen was indeed happening. I am going to include my thoughts/comments/tips throughout each section of the recipe, since that’s easier than trying to summarize it all here. One thing I do think that I need to work on is my slashing. Perhaps my knives aren’t sharp enough and I need to get a razor? This happened with the French bread as well – the slits were barely noticeable and didn’t open up. Any tips from you bread geniuses out there?? 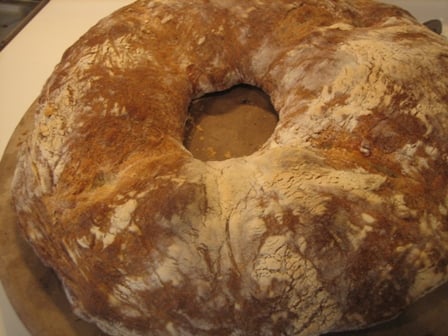 Overall thoughts on this bread… FABULOUS! It turned out exactly the way I imagined it should. The crust was crisp and crunchy, and the inside warm, chewy, and full of big air holes. I can’t tell you how proud I am of this bread and of learning many new things in the process!