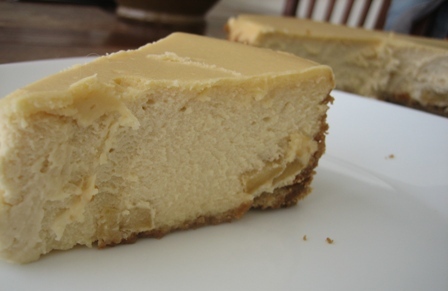 Thank you to Jaime of Good Eats ‘n Sweet Treats for choosing this week’s recipe, Brown Sugar-Apple Cheesecake. I am a lover of all things cheesecake; I don’t think I have ever met a cheesecake that I didn’t like. So needless to say when this week’s recipe was revealed I was beyond thrilled. I have always had success with cheesecakes, so I wasn’t worried about this recipe, but that is not to say that it went off without a hitch.

I got my crust put together, baked off and cooled. The trouble began with the carmelization of the apples. My large non-stick pan was dirty and I didn’t feel like washing it just to saute some apples, so I took out a slightly smaller stainless steel pan. Easy enough. Moments later the kitchen was flooded with a wretched burnt butter and apple smell that was less than pleasant. I had foiled the first batch of apples, so I decided to slice what I had left in half so that I would still have the same number of apple wedges, albeit a little smaller.

With the apple crisis averted, I moved on to putting together the cheesecake filling and it came together easily and without incident. Since I used a 9″ springform pan instead of a 10″ I ended up baking my cheesecake for about 20 additional minutes, for a total of 2 hours and 5 minutes. When I took the pan out of the water bath and unwrapped the (triple-wrapped) foil I was disappointed to find a puddle of water had gotten through the foil. Although it didn’t appear to affect the crust, Nikki suggested using heavy duty aluminum foil to avoid such problems in the future. Thank you for the tip Nikki!

You’d think that this would be the end of the cheesecake saga, right? Well, the rest revolves around my food-obsessed, yet darling golden retriever. He appears to have stretched in length overnight because even though the cheesecake was pushed against the back counter to cool, he still managed to snag a chunk out of it. Needless to say, I was not happy.

While Dorie suggests garnishing this cheesecake with a thin layer of apple jelly or a dusting of confectioner’s sugar, I had planned to drizzle the cheesecake with the remaining butter/brown sugar mixture from carmelizing the apples. I think this would be fabulous; however, I am not able to report on how it tasted because the dog managed to find that plate as well. ::sigh::

Aside from all of the trials and tribulations, what was my final take on this cheesecake? I absolutely loved it! The brown sugar in the batter made for a deliciously sweet and creamy cheesecake, and the apples complemented the cheesecake’s flavor perfectly. Being an apple lover, I would probably opt to pile even more apples on next time. The amount in the recipe wasn’t enough to cover a single layer of the pan, so I would certainly up the apples to cheesecake ratio. Overall, another perfect dessert from Dorie! 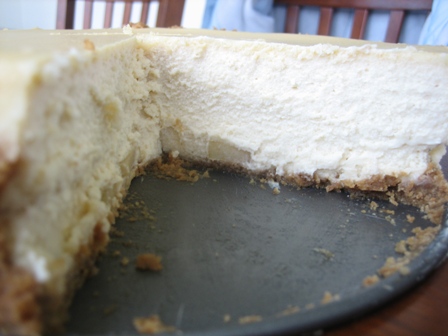 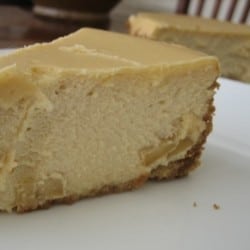