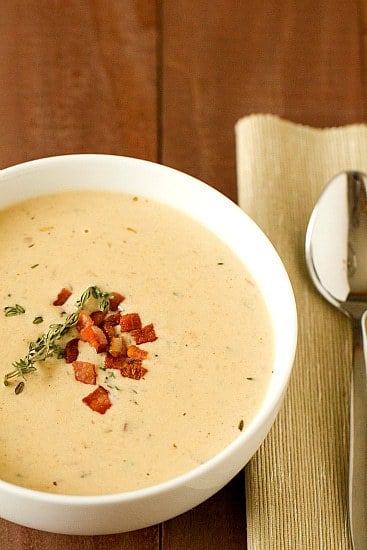 The soup parade continues! I’ve kept up with my New Year’s resolution of making a new pot of soup every week, and up until now they’ve all been fairly healthy varieties – Chicken Noodle Soup, New England Clam Chowder, and Minestrone. So you had to figure that it was only a matter of time before I laid something a little heavier at your feet. For the most part, I have gotten away from eating very heavy or cream-laden soups since much of the beauty I find in eating soup is that it’s a pretty light meal and doesn’t leave you feeling weighed down. That being said, sometimes a bowl of creamy decadence can be just what the doctor ordered, especially during a cold and blustery day in the winter. And this creamy potato cheese soup will certainly fit the bill. 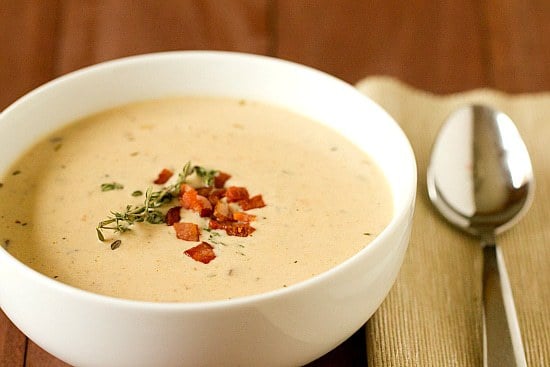 I’ve been wanting to try a creamy potato soup for seemingly ever, and finally went about a search with my first stop being my favorite soup resource, the The Best Soups and Stews, which is written by the editors of Cook’s Illustrated magazine. They had a basic cheddar cheese soup in the book, with a couple of different variations – one that included bacon and another that included potato and beer. It’s no secret that I’m a carbaholic (hello, potatoes!), that bacon makes everything better, and that beer in food is usually always awesome, so I went about combining each of the elements I liked from all of the variations into one utterly amazing soup.

This soup is definitely best as soon as you make it, but I feasted on leftovers for a couple of days. Due to the cheese and dairy in the soup it can separate a little and become slightly grainy when you re-heat it, but don’t worry, it still tastes fabulous, it just doesn’t look as pretty.

I love all the flavors going on here and how chunky the soup is. This recipe is definitely going to be stashed away for many chilly days to come! 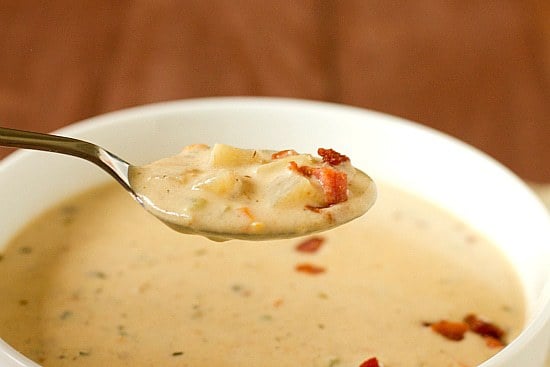 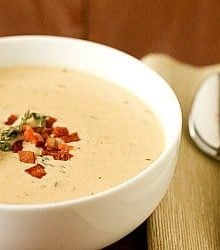 77 Comments on “Cheddar and Ale Soup with Potato & Bacon”