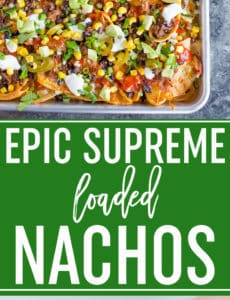 These are the absolute epitome of supreme loaded nachos… a mixture of tortilla and corn chips topped with tons of cheese and all of the best toppings you could imagine! They are sure to become a party staple at your house. 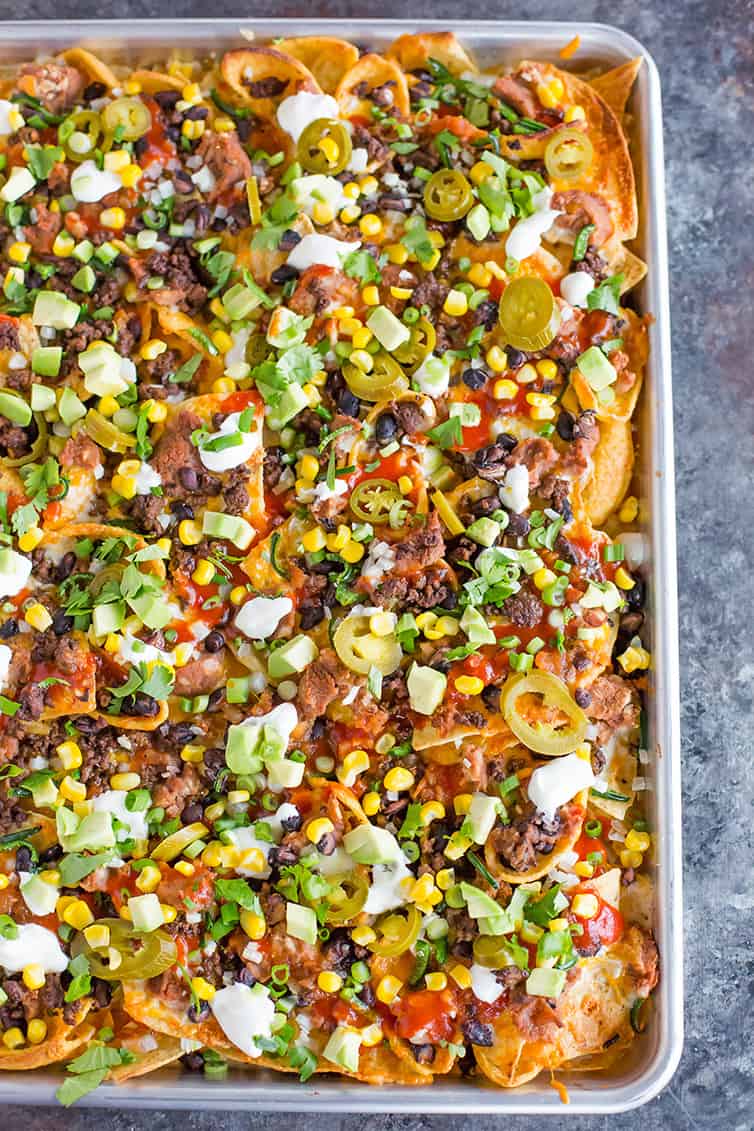 OMG. These nachos. They blew my mind and you need them in your life, too.

We do not make nachos at home very much at all, but we WILL order them when we’re out, which, HA, is not often anymore. But back when we used to go out to eat a lot, amazing-sounding nachos on an appetizer menu was a must-order. They’re the best loaded up with tons of delicious toppings, and these supreme loaded nachos seriously take it over the top.

If you’ve ever wondered how to make utterly fantastic loaded nachos at home, this is your one-stop-shop and ultimate guide for all things nachos. Your friends will beg you to make these over and over again, guaranteed. 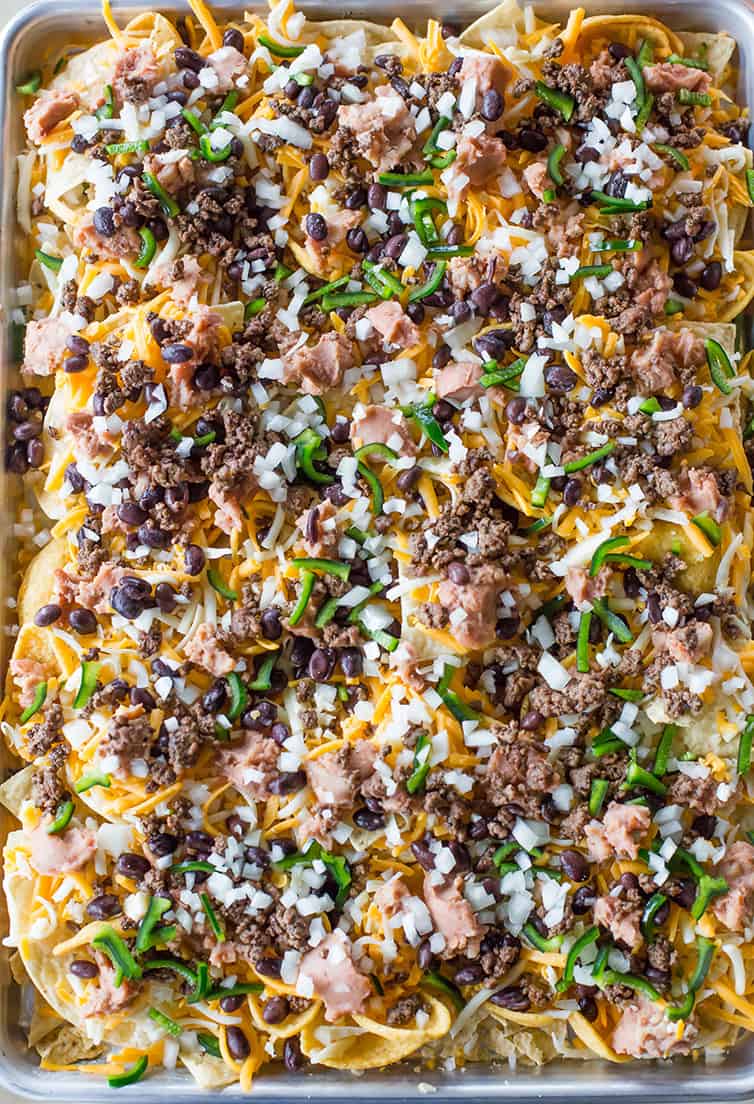 This recipe makes A LOT of nachos… two half sheet pans worth, which is absolutely perfect if you’re having a party. If it’s just two of you, then I would definitely cut the recipe in half!

There are two big keys to these nachos:

#1: Don’t Cram the Pans! Don’t try to stuff all of the chips onto one pan – you’ll end up with a big pile of chips that only have toppings on the very top layer and lots of naked chips underneath. No bueno. By keeping everything in as thin a layer as possible, you guarantee that almost all of the chips will have at least some topping on them.

#2: Don’t Skip the Fritos! This is the very first nachos recipe I’ve ever seen that uses Fritos Scoops in addition to tortilla chips, and seriously, it’s brilliant. That periodical bite of corn chip heaven is sublime. (And if you’re a Frito freak like me, then you’re going to want to put Frito pie on your menu ASAP as well.) 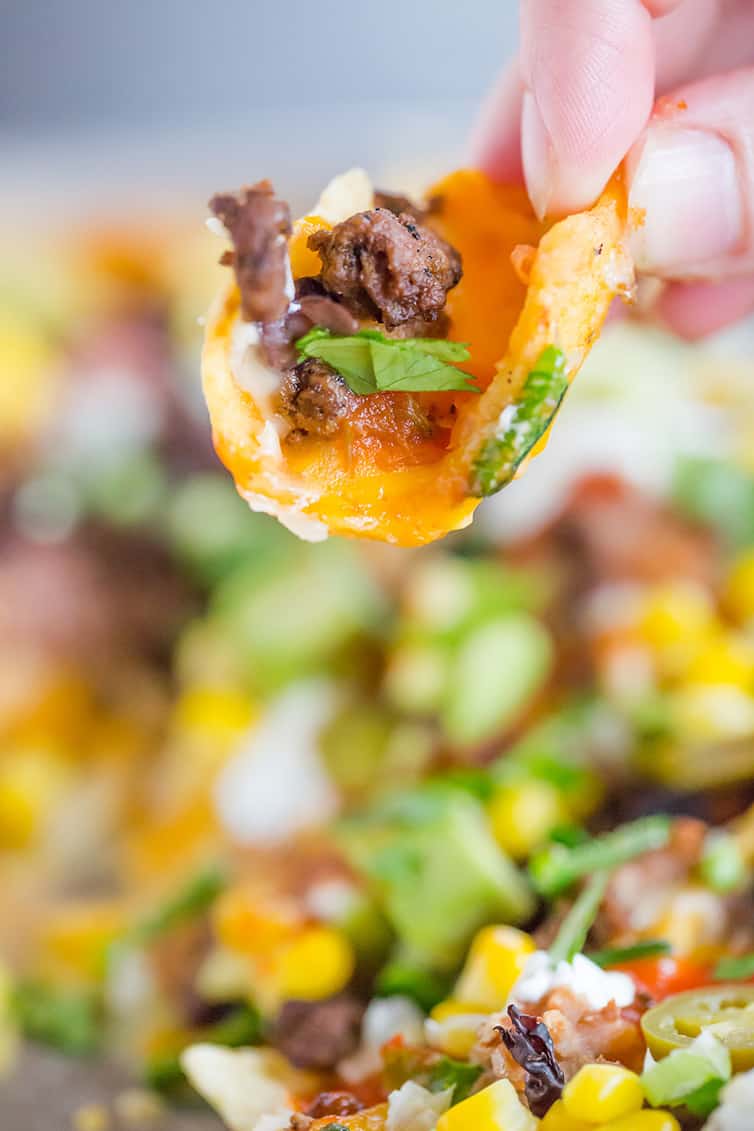 Now, let’s talk about those all important toppings!

These nachos include just about every imaginable topping you could think of… let’s break them down!

I know, these are A LOT of toppings, but I honestly think they each add a different dimension to the nachos. That being said, you could for sure omit or change any of these based on your personal preferences.

If you’re having a party or serving to other people that you know might be a little picky, you could always take all of the post-broil toppings and make a toppings bar with them, so everyone can grab they’re toasty, cheesy nachos and put as little or as much of the toppings on as they’d like. 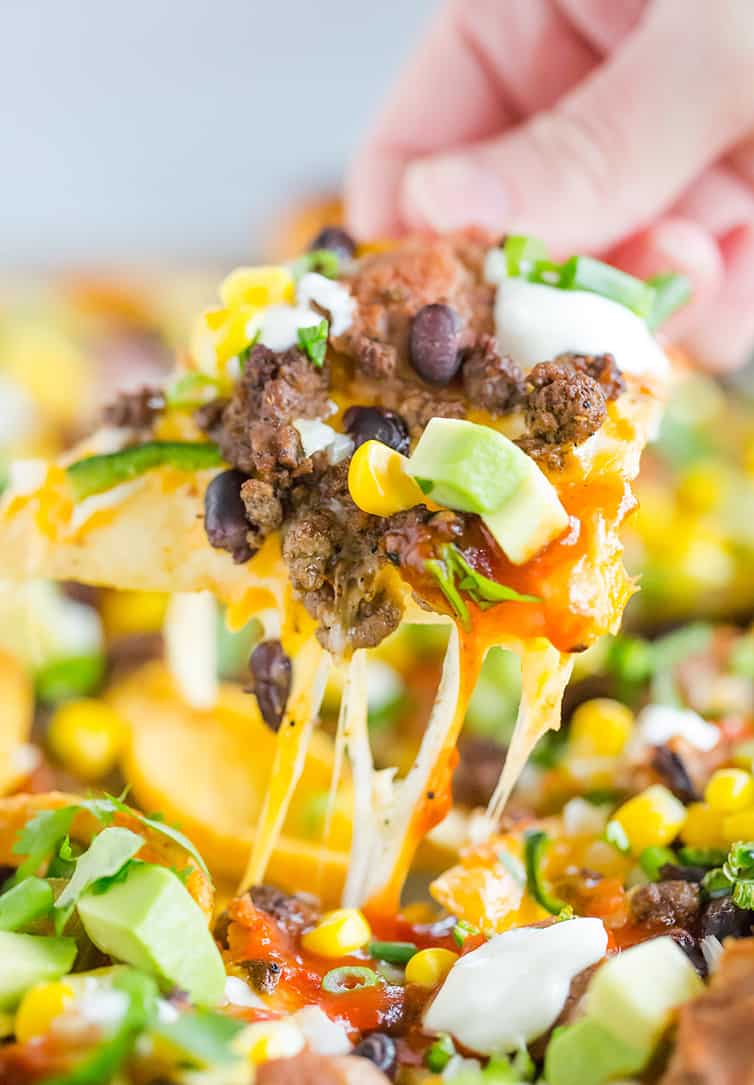 Have I totally convinced you to make these nachos yet? Because hoo-boy, I cannot stop talking or thinking about them and I want to make more like, yesterday.

If you’re planning on watching the Super Bowl this weekend, you have the perfect excuse to whip up a batch! Or, you know, if you’re having a Netflix night or a game night, make as much as you need. Just throw your chips and cheese and whatever else you want on, pop them in the oven on broil for a few minutes, then load them up and dig in!

These loaded nachos are life changing, delicious, cheesy, a little spicy, and flat-out amazing. DO IT! 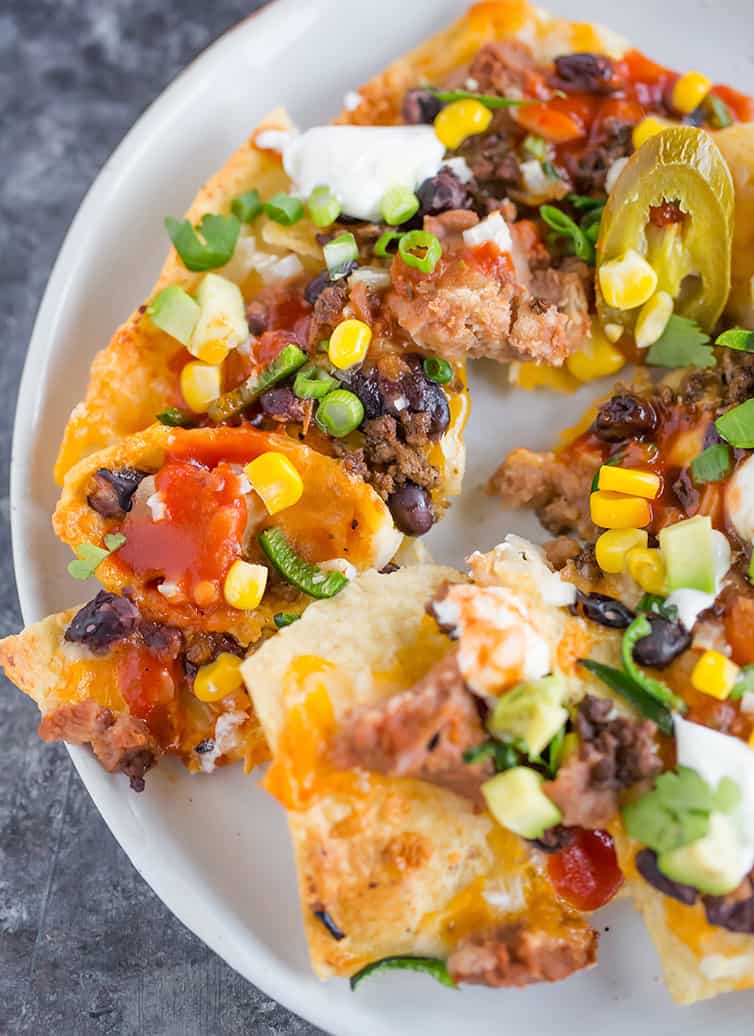 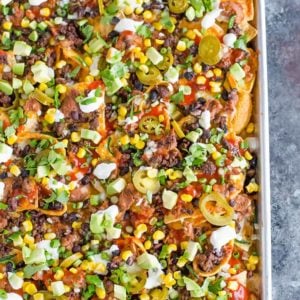 Yield: 8 to 12 servings
Prep Time: 15 mins
Cook Time: 5 mins
Total Time: 20 mins
These are the absolute epitome of loaded nachos... a mixture of tortilla and corn chips topped with tons of cheese and all of the best toppings you could imagine!
4.24 (17 ratings)
Print Pin Rate