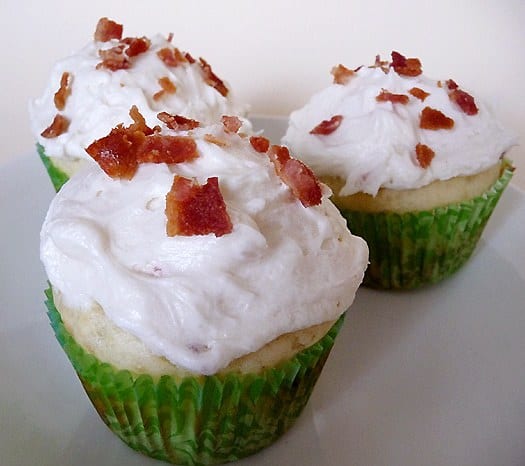 So, bacon is all the rage right now. Bacon and chocolate, bacon and popcorn, bacon and… pretty much anything. Bacon, bacon, bacon. I’m actually not sure why it’s so trendy now; I mean, isn’t bacon something that most people (aside from vegetarians and vegans) have loved since they were a kid eating breakfast on Saturday morning? I, personally, am one of those lifelong bacon lovers. BLT’s, bacon cheeseburgers, bacon and eggs, bacon and pancakes, bacon in mac n’ cheese, bacon and… pretty much anything. Love. And so these cupcakes? Absolutely love. I thought, what naturally goes better with bacon than pancakes and syrup? Not much else, and so these babies were born. 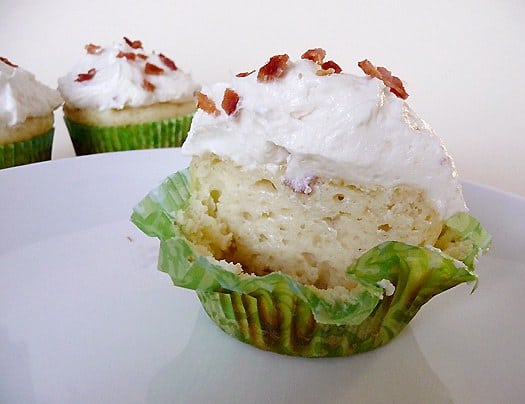 The cupcakes are made from a homemade pancake batter and baked up in a muffin tin. They are light and airy on the inside, just like a wonderfully fluffy pancake should be. The buttercream frosting is spiked with maple syrup and crumbled bacon. It’s important to note that unless you have a large, round decorating tip you are not going to be able to pipe the frosting onto these cupcakes. As you might imagine, the bacon will get stuck in the decorating tip. So just slather it on and call it rustic. And quaint. And then take a huge bite and savor all the salty sweetness in all its glory. If it’s 8am call it breakfast; if it’s 8pm call it dessert. You can’t go wrong either way!

Next time I think I’m going to make a few extra pieces of bacon, crumble them up, then drizzle some maple syrup over, toss together to coat, and then fold into the cupcake batter before filling the muffin cups. The more bacon, the merrier, right?! 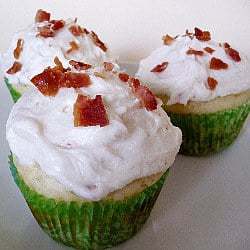 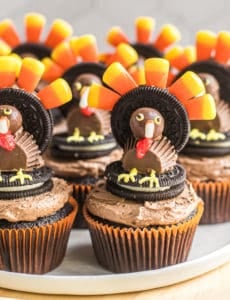 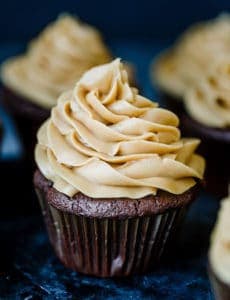