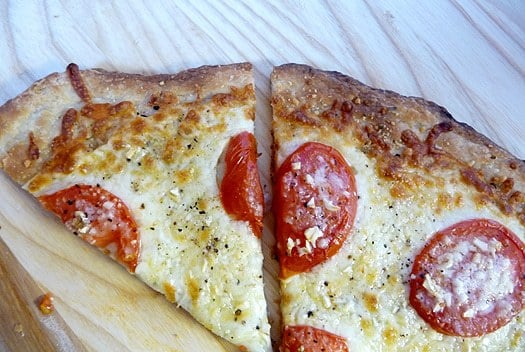 I always love a good recipe challenge. So a couple of weeks ago when my Chief Culinary Consultant and I were hanging out on a Saturday (and after I had already lost about a bajillion games of NHL11 to him), and he said, “What do you think about baking something?” I eagerly shot straight up. Within seconds I started rattling off ideas… apple crisp? apple pie? cobbler? cheesecake? I’m sure I threw another 5-10 ideas out there when he said he was thinking something more along the lines of pepperoni bread or pizza. Oooh, equally good candidates. We both claim pepperoni pizza as our favorite, but he said that he once had a fabulous white pizza from a place in Greensburg, PA, Vallozzi’s, that had a thin crust that almost tasted like pie crust, and could I maybe try to duplicate it? I’d never been to the restaurant or had their pizza, but figured that I could do some research and come up with something. A couple of hours later, I pulled this pizza out of the oven and we devoured it. So, how did it compare to the one I was trying to replicate? He said the crust was almost perfectly replicated and that the pizza was awesome. Win! 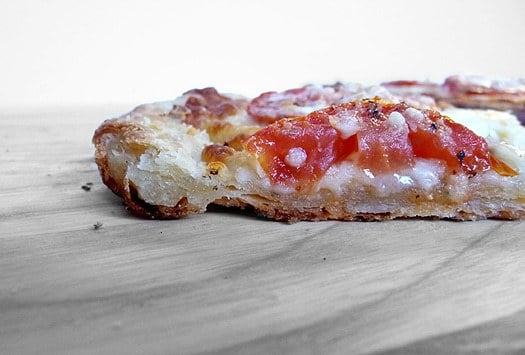 If you look at the photo above, you can see that the crust is very flaky and really quite close to that of a pie or pastry crust. It gives the pizza great dimension and an unexpected texture compared to traditional pizzas. I ended up merging some of the key aspects of a Chicago-style deep dish crust (which typically tastes like pie crust and is buttery and flaky, but way more doughy than what I wanted) and a traditional thin crust pizza. In the end, you have a crust that includes butter, a small amount of yeast, and a short rest time (no rising).

So what about the top of the pizza? I did some Googling and found a thread talking about white pizza. Lo and behold, a former employee from Vallozzi’s shared a few tips: their crusts are par-baked prior to topping and fully cooking the pizza, and they use good provolone cheese, tomatoes, garlic powder, salt, pepper, minced garlic and basil. A quick check of the restaurant’s website noted that Romano cheese is also included. So, I put together my version – the first time I made it I had fresh basil and used that, but feel free to use your favorite fresh or dried herbs.

Where do you get your favorite pizza from? 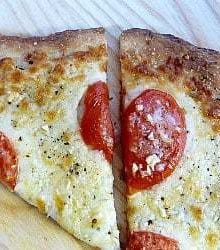