Baking Basics: The Importance of Weighing Ingredients When Baking

Alternate title: Why You Should Always, Always Weigh Your Ingredients When Baking. 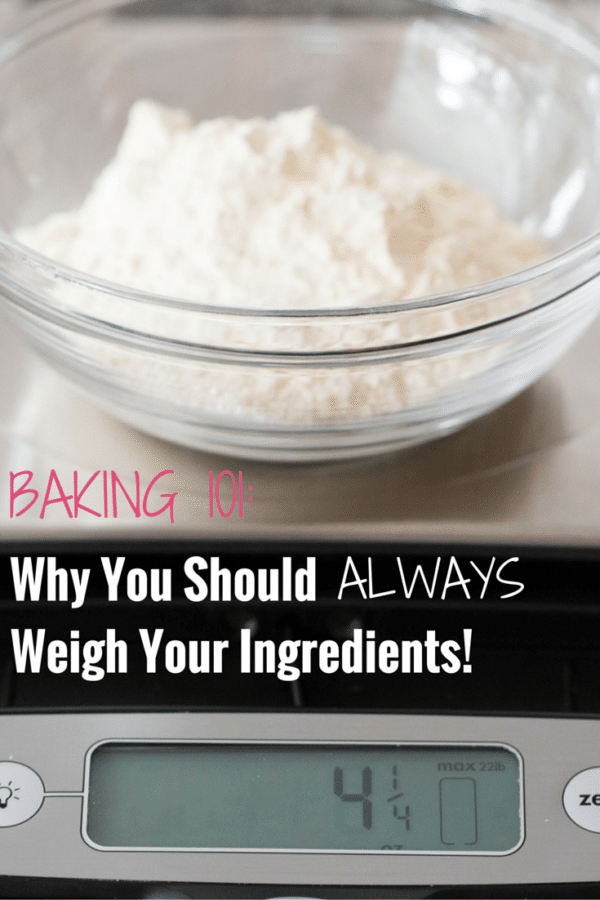 One of the most important things that I learned when I first started to gain my footing in the kitchen was the value of a kitchen scale. The ability to weigh ingredients and get precise measurements is incredibly valuable when baking, which comes down to a lot of science and chemical reactions. It was almost seven years ago now when I first got on my soapbox about why I prefer weighing ingredients. Since then, I’ve included weight conversions in a number of recipes, but given the sheer volume of comments and emails I’ve received about ingredient weights, I thought it would be a good idea to revisit the topic here.

The most common misconception that I hear in emails and comments with regards to weighing is the overarching belief that 8 ounces = 1 cup… forever and ever, amen. No matter what. For all ingredients. Always.

This is simply not true.

For liquid ingredients like water and milk, yes, this is true. Butter and sour cream are anomalies of solid ingredients and they, too, weigh 8 ounces per cup. This is about where that line of thinking ends.

All other solid ingredients (and even ones you can pour like honey and molasses), have vastly different weights per 1 cup of volume.

Take, for example, the following weights for 1 cup of some of the most common ingredients in your pantry:

As you can see, if you tried to use the conversion of 8 ounces per 1 cup for every single ingredient, you would likely end up with some disasters in your kitchen. For a complete, comprehensive list, check out (and bookmark!) this Ingredient Weight Chart by King Arthur Flour. This is my go-to source for converting ingredients to weight measurements; the chart has measurements in both ounces and grams.

I should note that there is one major discrepancy I’ve found and that is in regards to flour. King Arthur Flour lists its all-purpose flour as being 4¼ ounces per 1 cup, Cook’s Illustrated and Rose Levy Beranbaum say 5 ounces per 1 cup, Peter Reinhart says 4½ ounces. Obviously, that’s a substantial difference! If the recipe you are following lists specific weights, always go by those! If there is not a weight listed, you can try measuring and weighing flour using a 1-cup measuring cup a few times and taking the average and use that.

I currently use the OXO Food Scale with Pull-Out Display, which has a 22-pound capacity. It measures in ounces and grams, as well as milliliters and cups.

I know that some people feel very strongly one way or the other about weighing your ingredients or using the traditional measuring cups. Sure, weighing seems more like science class when you could be using pretty measuring cups shaped like birds, but the truth is… it’s just more accurate (plus, there is a lot less to clean up!). If you crave consistent results with your baked goods, and especially if you venture into pastries or breads, you’ll want to get in the habit of weighing ingredients.

I have been including weight ingredients for all recipes recently, and as time allows, I will be updating old recipes, as well. For those that are not yet converted, use that awesome conversion chart from King Arthur Flour!

Now, grab a scale, your favorite ingredients, and bake up something wonderful! :)

Check out more posts in the Baking Basics series:

5 Mistakes to Avoid When Preparing a Recipe

Flour 101: The Definitive Guide to the Different Types of Baking Flours

Baking Soda vs. Baking Powder: Everything You Need to Know!

17 Comments on “Baking Basics: The Importance of Weighing Ingredients When Baking”