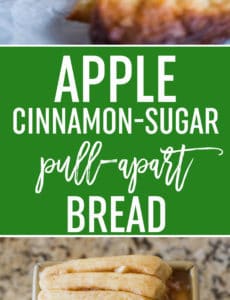 This apple cinnamon sugar pull apart bread is made completely from scratch and tastes like apple pie! It comes together quickly and would the perfect fall weekend or holiday breakfast. Feel free to drizzle it with a glaze, but it’s absolutely delicious as-is! 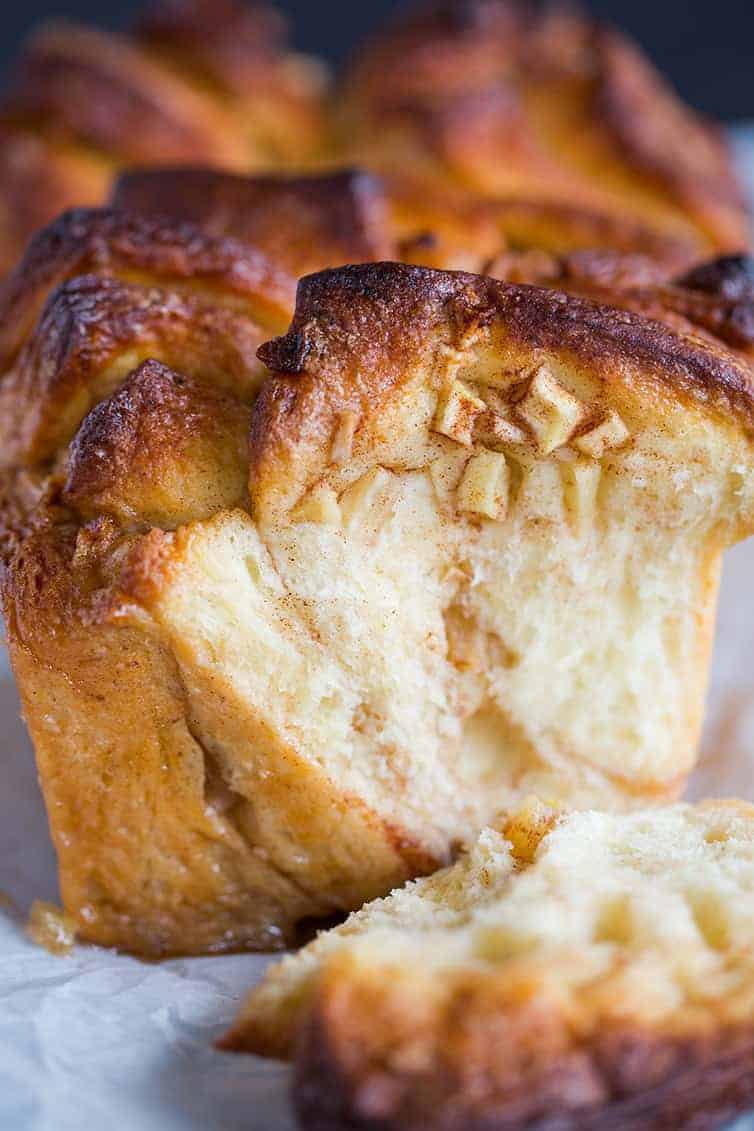 Are you ready for a fantastic, melt-in-your-mouth, tastes-exactly-like-fall recipe?

The weather absolutely refuses to cool down here, with highs still in the mid-70s, but I’m over it and I’m all-in on everything fall right now, cool temperatures or not. I can’t think of a more perfect fall recipe than the one I’m about to share with you – this apple cinnamon sugar pull apart bread is absolutely everything that fall mornings should be… warm, cozy, and good for your soul.

I first made a version of this bread over six years ago after seeing it on Joy the Baker; it was a simple cinnamon sugar pull apart bread, and while it was delicious, I thought that the addition of apple would send it toppling over the edge, and my gosh was I right. It absolutely MAKES this bread and it’s a super simple addition – all you need to do is peel and chop up an apple! 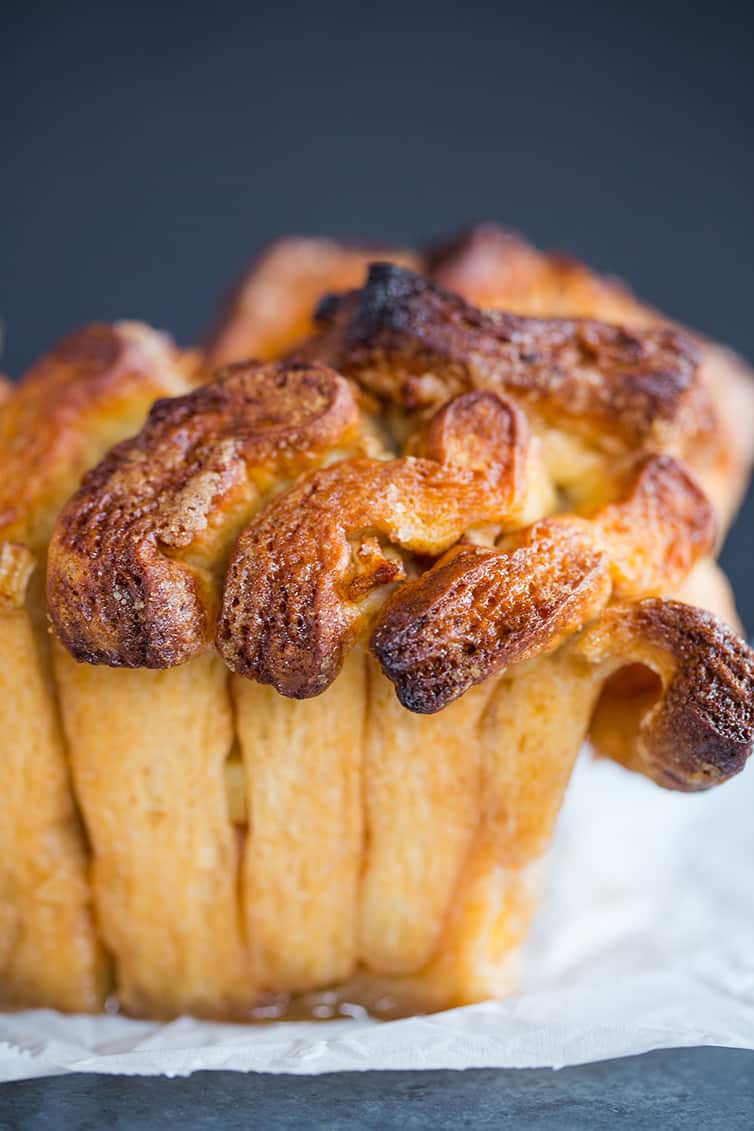 While it may look intimidating, this is a straightforward recipe that you’ll have no trouble executing.

The dough mixes together really easily (no need for a stand mixture, just use a bowl and spatula!) and is super forgiving. After its first rise, it gets rolled out, brushed with butter and covered in an apple/cinnamon/sugar mixture. The dough is sliced into tons of squares and rectangles, then stacked up and loaded into the loaf pan.

One last rise, then into the oven it goes! 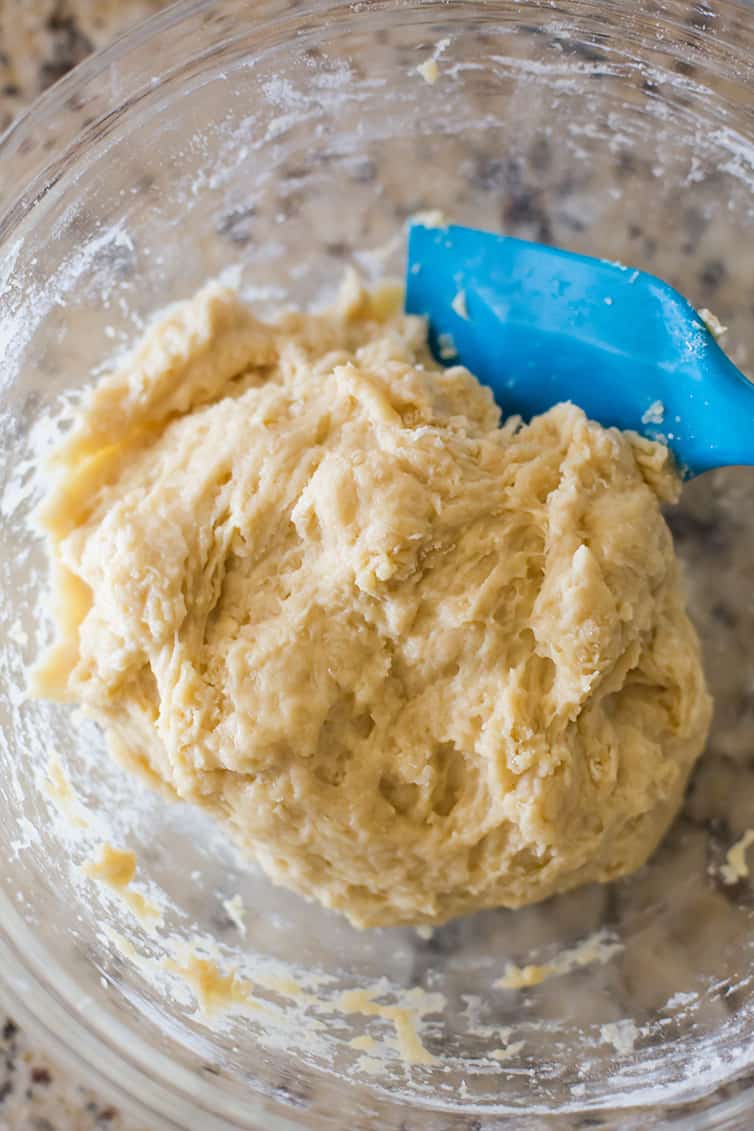 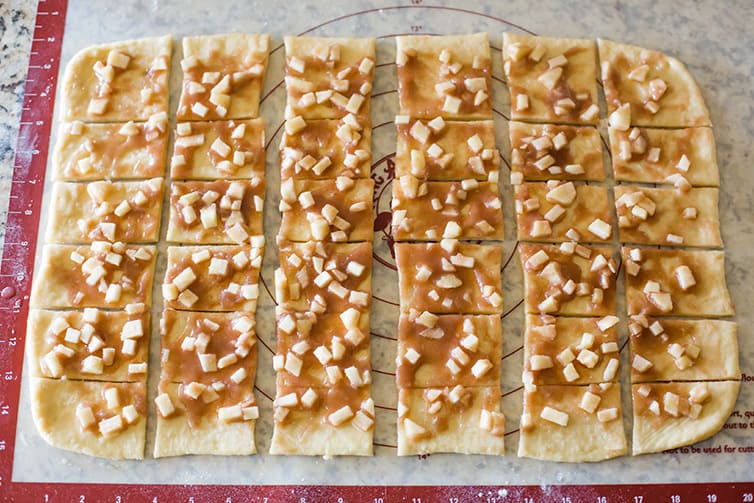 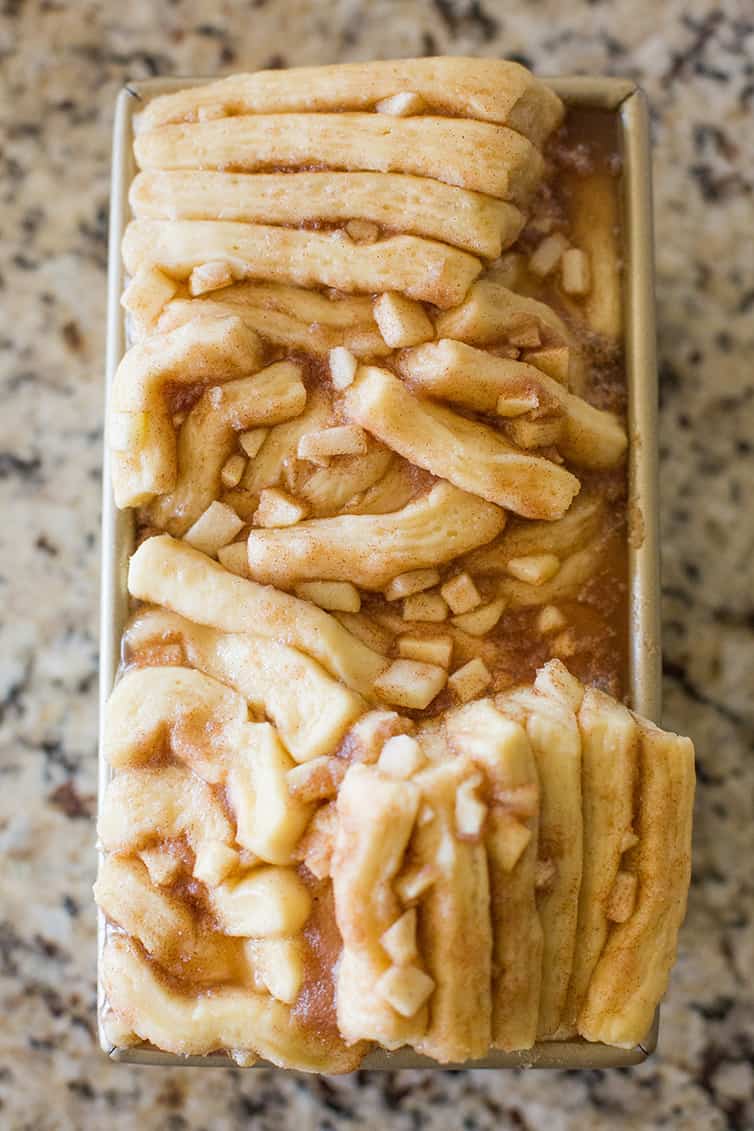 You want it to bake up really deep golden brown to ensure it’s baked the whole way through (an instant read thermometer is great for knowing exactly!), but don’t fear those super dark spots on top. The truth? They taste like pie crust. Seriously. And at the bottom of the bread is a pool of cinnamon-sugar apple syrup that tastes like apple pie filling.

What kind of apple should you use? Your favorite! With so many people going apple picking right now, whatever you have in excess or that you particularly love would be perfect. I used honeycrisp because they’ve been on sale and they are my absolute favorite to eat, so I’m keeping them stocked up in the house. 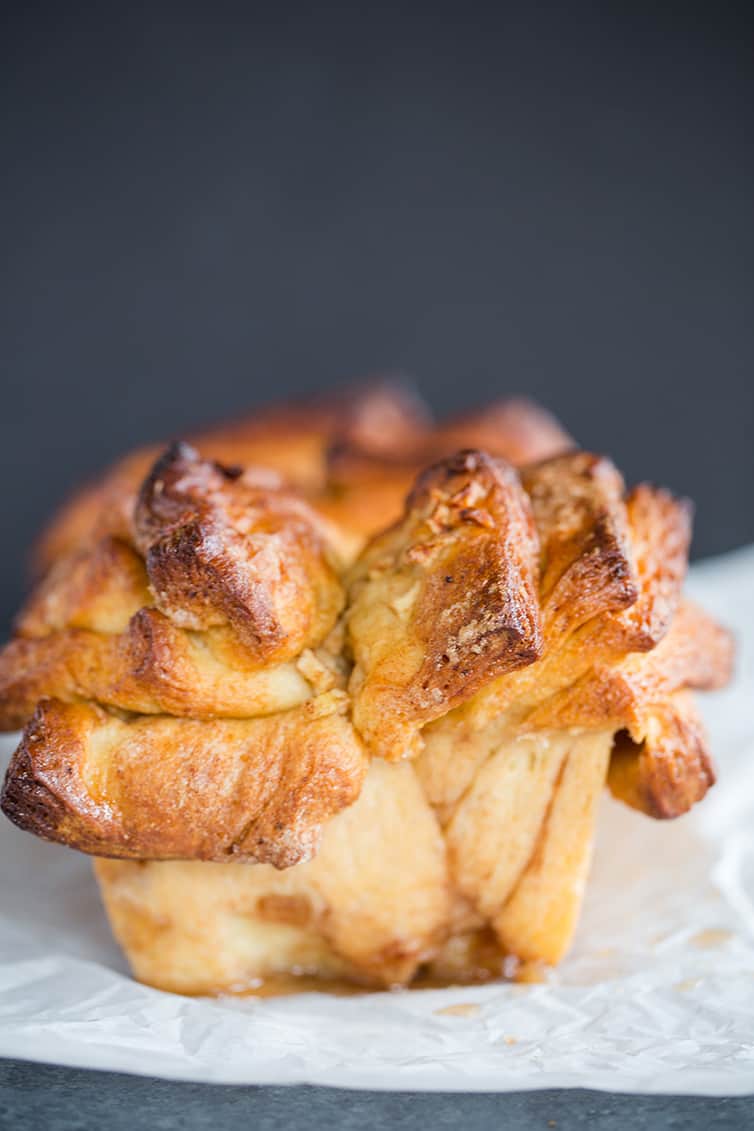 I could NOT get enough of this loaf of bread; totally addicting!

I chose not to glaze it with anything, and I honestly still don’t think it needs anything, but if you’d like to add one, you could do a simple powdered sugar glaze, a cream cheese glaze, something with maple, or even the glaze from my apple fritter doughnuts, especially if you plan to serve it warm.

Now I challenge you not to keep pulling off piece after piece until there are only crumbs left, because I can’t possibly be the only person who does that, can I? 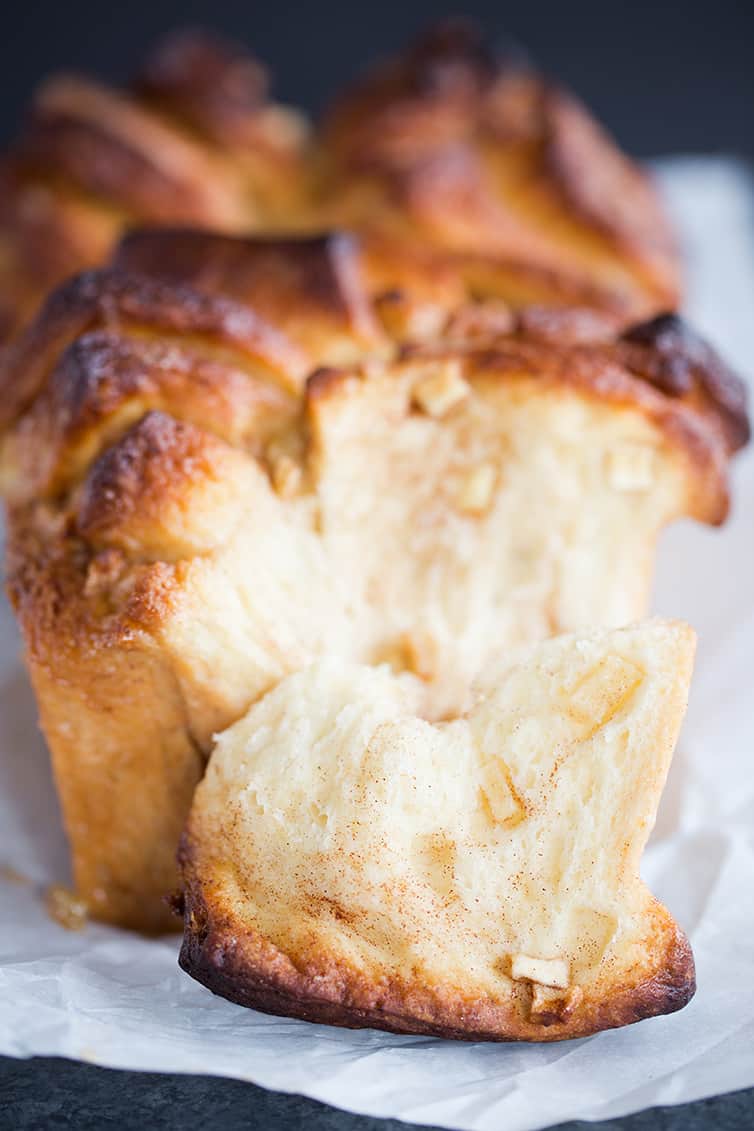 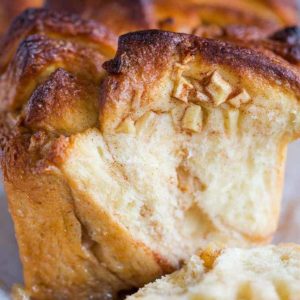 This recipe was originally published on August 23, 2011.