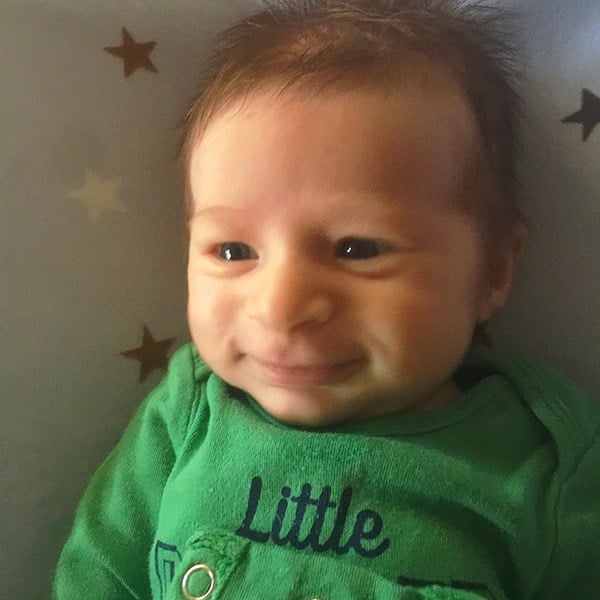 1. That was the very first smile I was able to capture on camera! He’s been doing a lot more smiling without being prodded and it makes my heart melt every single time.

Last Sunday we had Dominic’s baptism; since Joseph slept through his entire baptism and the two of them have been polar opposites thus far, we had a feeling Dominic wouldn’t sleep through his. Oh, how right we were *cue screaming baby*. Yikes. But, we made it through the ceremony (he DID eventually fall asleep!) and had some great food and company afterwards. 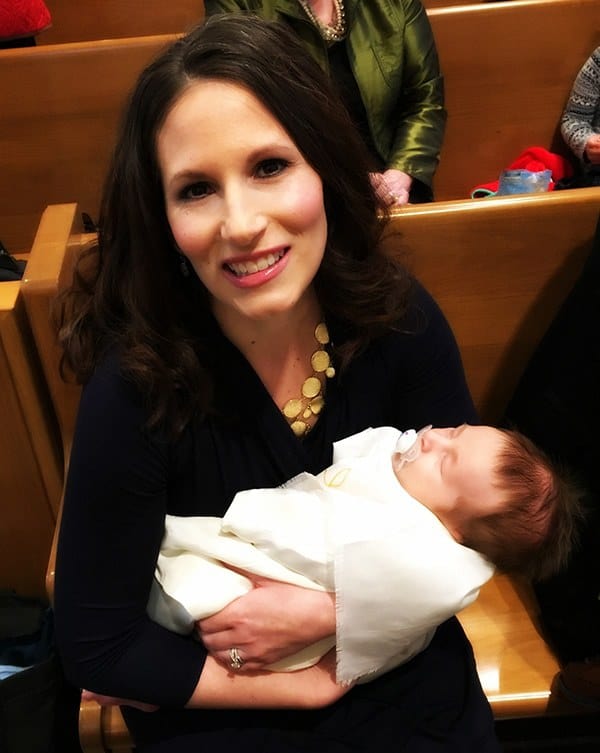 2. One of my husband’s best friends was Dominic’s godfather, so he and his wife and daughter came in for the weekend and stayed with us. Their daughter is 3.5 years old, so we were excited to see Joseph play with someone closer to his own age since his only sibling is still incredibly tiny and he doesn’t have any cousins. I’m pretty sure Joseph fell in love with an older lady :)  They had so much fun playing together, chasing each other around the house, taking turns with toys… it was so adorable to watch. And Joseph couldn’t stop giving her kisses LOL. Two days after they left, he was still walking around the guest bedroom calling, “Dewwa, Dewwa?” (Della). We even managed to go out to eat with four adults, a preschooler, toddler, and a newborn without a single incident. Major win!

3. I had my 6-week checkup this week and I am almost back to normal! All of my restrictions have been lifted except for lifting Joseph – I have to wait two more weeks (the doctor said with a repeat c-section I’m more susceptible to a hernia and wanted me to give it a full 8 weeks). I have a small issue with a part of my incision that they treated in the office and will hopefully be totally healed when they re-check it in two weeks (fingers crossed!).

4. So, after Einstein had his stroke and went to his first (and only) rehab session, he did hydrotherapy (a treadmill in water). Afterwards, he smelled like a mix of chlorine, bromine, and wet dog. It was a smell that, even though we washed him multiple times afterward, never, ever went away. It was a strong, very distinct odor. A couple of weeks ago, I was in the shower before bed when that smell hit me. Like I said, it was so distinct that you really couldn’t mistake it for anything else. I immediately started looking around to see if a cleaning bottle was sitting out somewhere, but there were none. As quickly as it came, it was gone. Then the next night, my husband took Duke for a walk around the neighborhood. He said halfway through his walk, HE SMELLED THE SAME THING. And just like my experience, it only lasted for a few seconds, but that it was absolutely unmistakeable because it was so distinct.

Fast forward to two days ago – my husband was on the couch in the living room, I was in the kitchen, Joseph was napping upstairs, and Dominic was napping in the living room. We both heard whining coming from the front of the house, where we have a lot of windows and Duke frequently whines and barks at people or other dogs. My husband immediately called his name and shushed him before he could bark, so as not to wake up the boys. Except… he then realized Duke was laying right next to him on the floor. He hadn’t made a noise at all. My husband and I BOTH heard the whining, from different spots in the house, coming from the same place. SO… we’re pretty much convinced that Einstein is hanging around with us.

5. And on a lighter note, I kept laughing out loud scrolling through these hilarious dog snapchats – so funny!

7. Last week, Leonard Cohen passed away, and I kept hearing his iconic song, Hallelujah, everywhere (so many amazing versions out there!) and it’s been stuck in my head ever since. That song is crazy beautiful, but the one thing it always makes me think of is the show The OC (did anyone else watch that like 10+ years ago?! Hallelujah – the Jeff Buckley version – was on its soundtrack). I also adore the Pentatonix version.

8. Are you ready for Thanksgiving? Tell me what you’re planning on making!

9. The last couple of years we’ve decorated for Christmas the day after Thanksgiving, and I am SO READY to bust out the decorations and crank some Christmas music!

10. TGIF! Since we’ve had Einstein on the brain, I wanted to share one of my favorite photos from not long after Joseph was born… 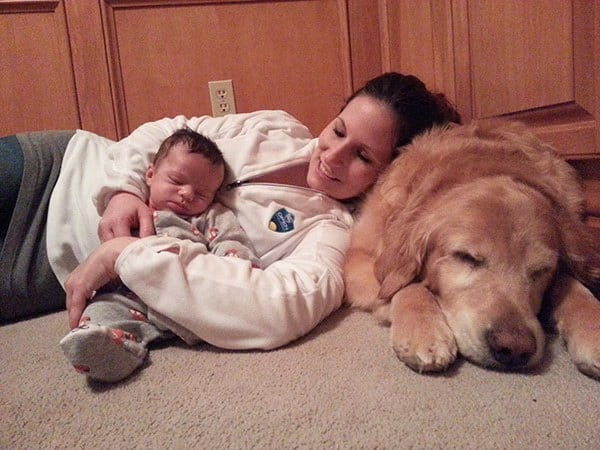