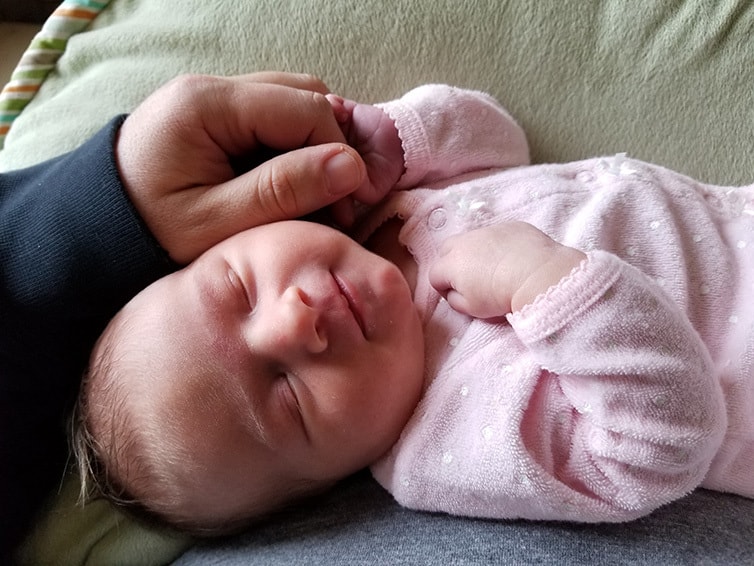 I don’t have a true Friday Things for you today since the week has been dominated by getting settled in and adjusting to our new normal with three littles, but I still wanted to drop in and say hello and share more details about Isabelle’s birth and our time at home this week! She is 1-week old today!

This was my third c-section and while I had high anxiety beforehand, it ended up being the easiest and least stressful birth experience of the three. With Joseph I was induced a week after my due date and then failed to progress in labor and I was most certainly NOT prepared for that outcome and had a panic attack. With Dominic, my water broke a few days before my due date and I attempted to VBAC, to no avail. After 30 hours of labor, contractions stopped and in I went for another c-section. I was so deliriously exhausted that I could barely keep my eyes open. I didn’t have a full-blown panic attack, but both times I shook for at least an hour afterwards. 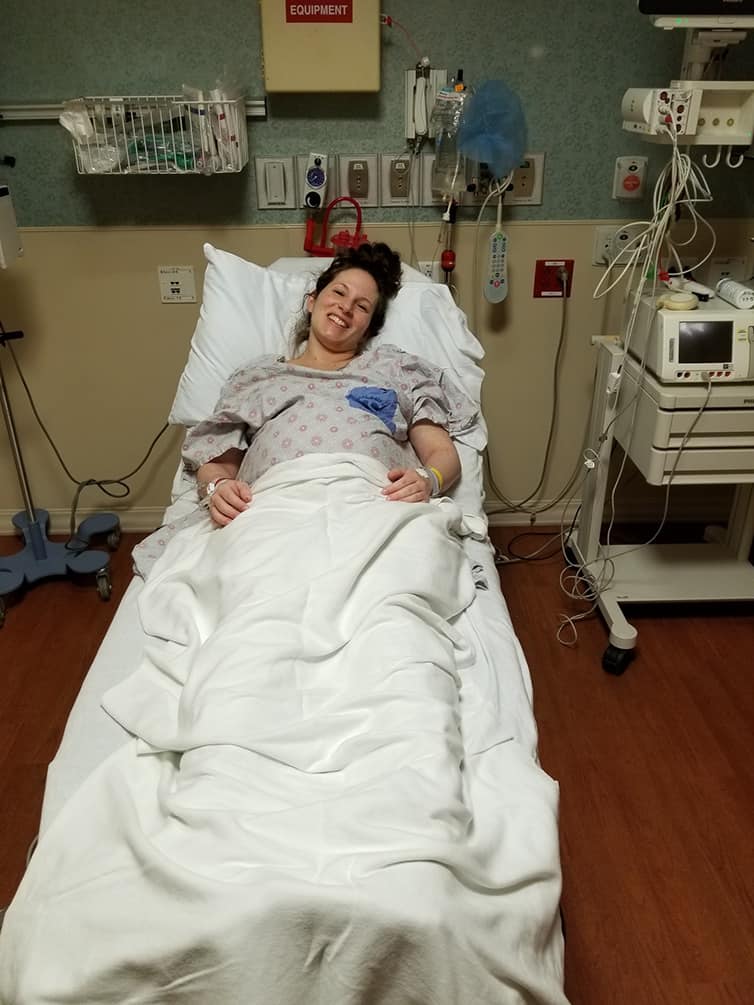 This time I knew from the beginning I would be having a c-section because of two previous ones caused by a narrow birth canal. I was anxious because it’s major surgery, but the day of the birth could not have gone more smoothly. We got to the hospital around 7am, got registered and then they started prepping me for surgery. My doctor came in, then the anesthesiologist, and by 8:50 they were wheeling me back to the operating room. I was fully awake and alert (and oddly relaxed) the whole time. I got to see Isabelle at 9:26am when they held her up to the little window in the sheet immediately after she was born, and then my husband snuggled her while they finished with me. By 10:30 I was back in recovery and feeling really well, not shaking at all.

We had deja vu of Joseph’s birth because as soon as the nurses saw her, they were hooting and hollering about her chin dimple just as they had when he was born. She was born with a full head of hair, but unlike her brothers, who had dark brown hair, she is sporting very light brown hair. I’ll be anxious to see what it eventually looks like! And LIKE both of her brothers at birth, she has blue eyes. Joseph’s eyes have since gone to dark brown and Dominic’s are now hazel. 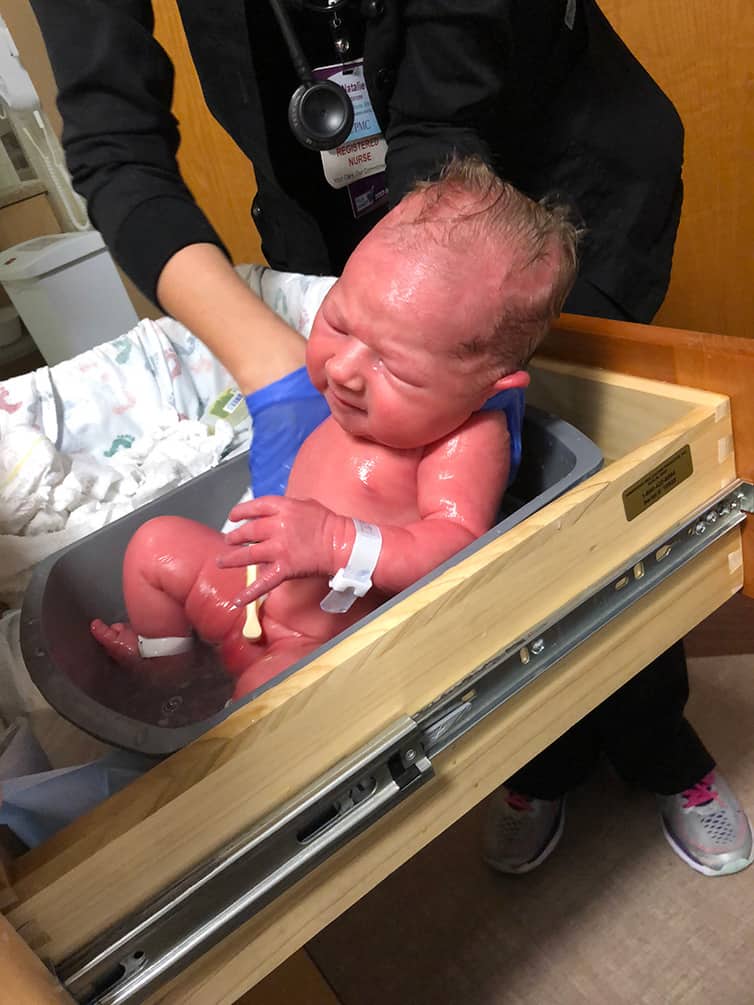 We had two uneventful days in the hospital where we both checked out really well, and the OB offered me an early release a day early so I jumped at the opportunity. Usually with a c-section you have to stay three nights, versus the typical two nights for a traditional delivery. I’m quite certain there is nothing more uncomfortable than a hospital bed, OOF… Plus, I couldn’t wait to get home, get settled, and be with the boys.

Speaking of Joseph and Dominic, they are absolutely enthralled with her. Joseph obviously understands much more than Dominic and he just wanted to hug her, kiss her, and help with everything. When he sees her with her eyes open, he gets SO excited… “Oh! Mommy! Baby sister woke up! Look at her eyes! Ooooooh she’s so sweet…” and he kisses her hands, her head, hugs her whole body, rests his head next to hers, and wants to help whenever she gets a bottle, and wipes up any spit up. He is just so gentle and loving and amazing. 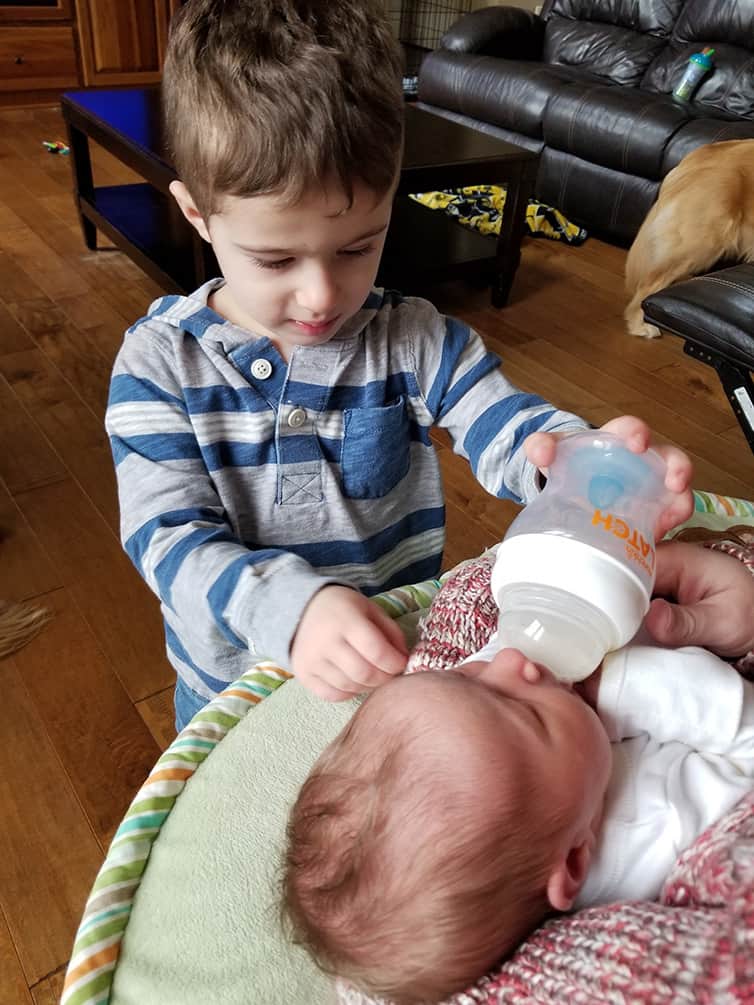 Dominic comes over and gives her big open-mouthed kisses on the head and puts his head on the pillow next to hers, which is his “hug”. He has also been my right-hand man with diaper changes… he follows me over to the changing table and pulls out a diaper and the wipes, handing them to me as I need them. Which honestly kind of blew me away! Then he puts everything back. Such a big little guy!

Duke and Judith were super curious and excited when we got home, but they’ve since calmed down and lay down at my feet when I’m feeding her. Two extra protectors :) 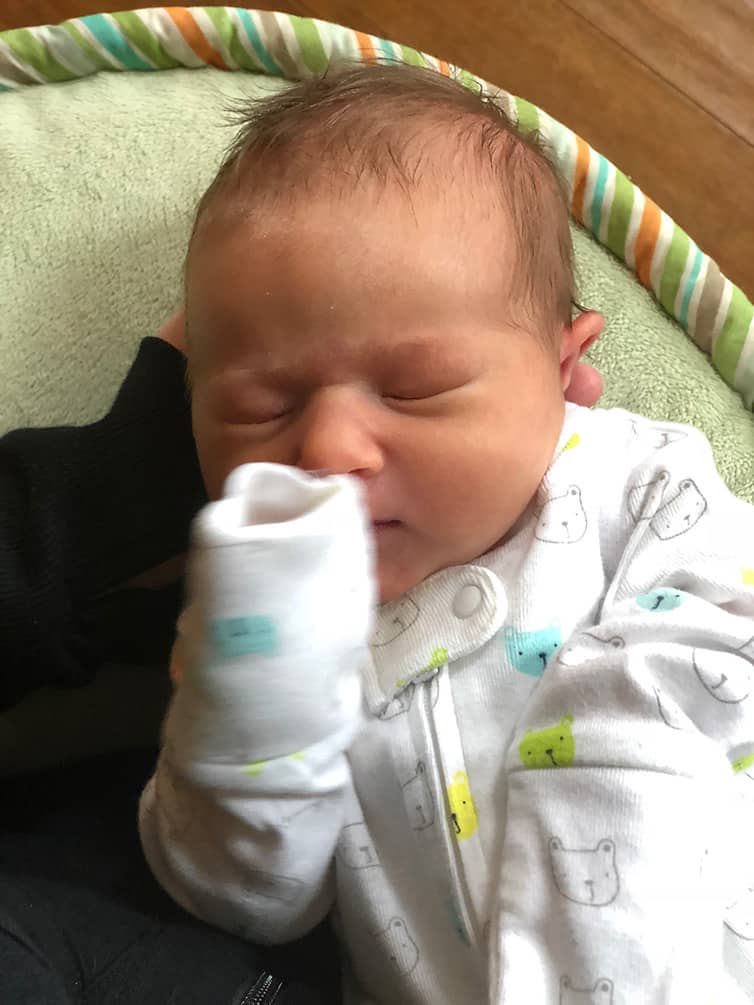 And as for little Isabelle, she’s been a perfect addition to our family. She, of course, is mostly just eating and sleeping, but it’s been fun to see her little eyes open up and be more alert each and every day. Our first couple of nights at home were quite sleep-deprived, but for the last three nights she has done consistent 2-hour stretches, and then a longer one toward morning. I’ve woken her up at the 3-hour mark for feedings in the morning, or she would have kept snoozing! As a result, I don’t feel TOO terribly exhausted, but I have been cat napping on the couch in the evening, as well. 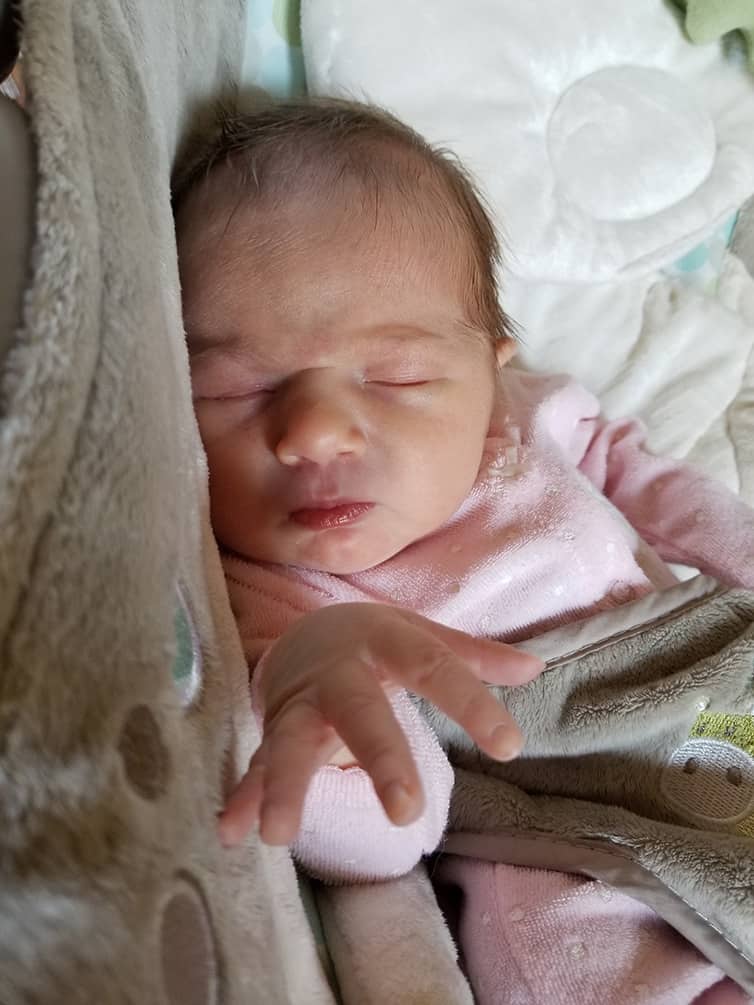 As for the recovery, I’ve been feeling really well this week; I’m getting around easier each and every day. The hardest part for me with recovering from a c-section is all of the limitations. Obviously I understand WHY (major abdominal surgery!), but all of our bedrooms are upstairs, so I can only come down in the morning and back up at night. I can’t move or lift things like laundry, won’t be able to run errands with the boys because I can’t get them in and out of the car, etc. It’s so short-lived, but frustrating in the moment; however we are blessed with tons of help from family!

We are absolutely loving our time at home and getting to know this little lady! :) 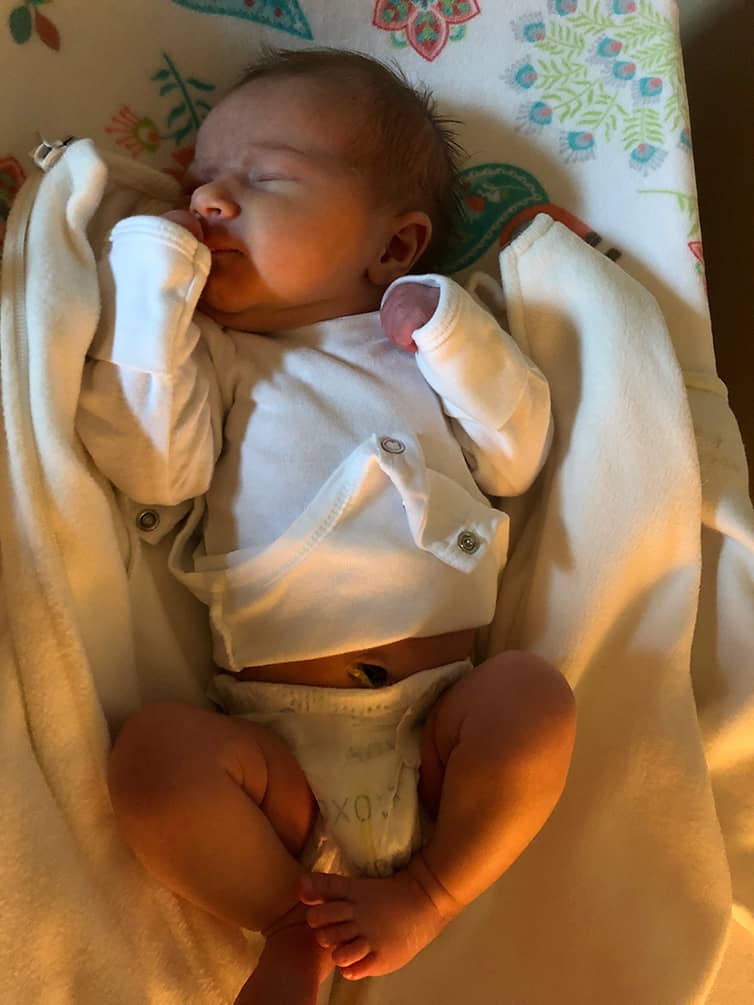 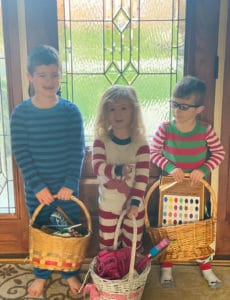 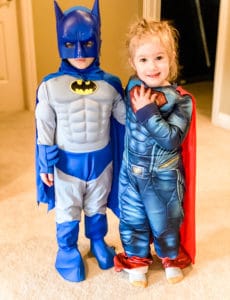 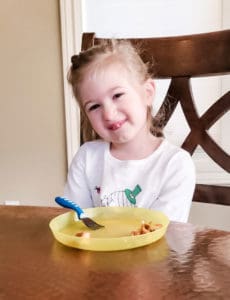