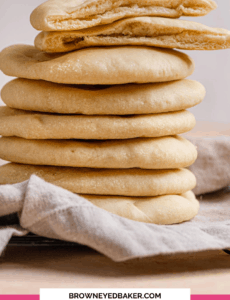 Learn how to make homemade pita bread with this simple recipe; I promise it’s easier than you think! So much better than store-bought, you can use your pita for sandwiches, gyros, dipping into hummus, making homemade pita chips… the possibilities are endless. I can’t wait for you to make these! 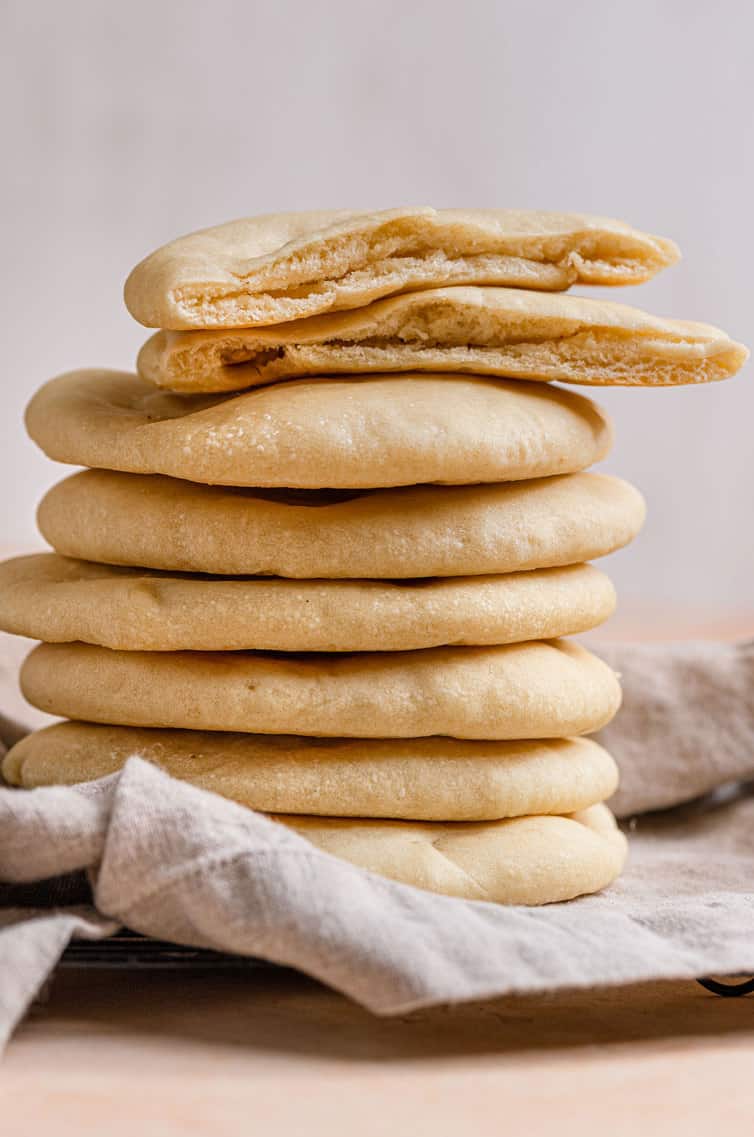 Growing up, my grandma always kept a stash of pita bread in her kitchen. She would sometimes stuff it with cucumber salad or tomato salad (always fresh from the garden!), but I most often remember her splitting them open, toasting them and slathering pb& j on them.

As an adult, I discovered true, traditional pita at Middle Eastern restaurants and fell head over heels in love. They were nothing like the store-bought stuff I ate growing up, and I couldn’t get enough of it, especially if I could dip it into authentic hummus.

Once I began tackling bread baking at home, pita was high on my list of recipes to try. I was surprised (and elated!) to discover just how easy making pita bread at home could be. You’ll never want to get store-bought again! 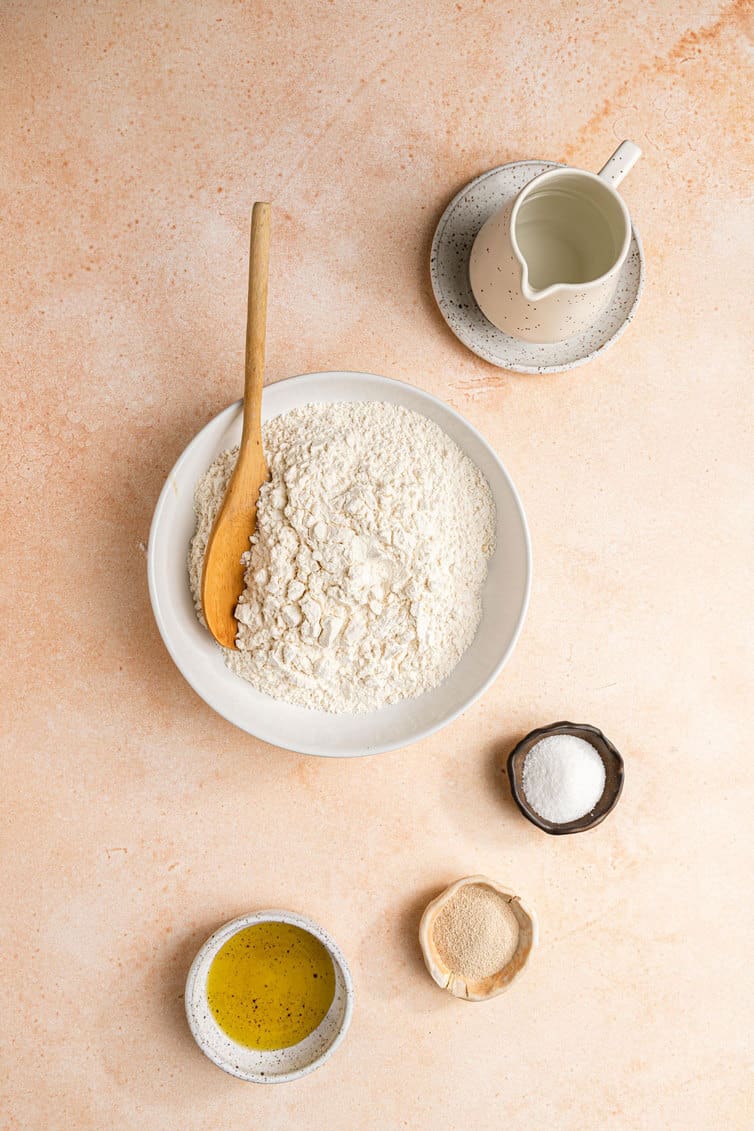 Pita is a general term for a family of yeast-leavened flatbreads that are common in the Mediterranean and the Middle East. The type that we are making today, with an interior pocket, is known by the generic term “pita” in most places in the U.S. and is also known as Arabic bread or Syrian bread. There are also pocketless pita versions, such as the Greek pita, which is traditionally used as the wrap for gyros.

Pita bread goes wayyyy back to prehistoric times in the Middle East; we’re talking nearly 15,000 years ago! There is evidence from the Stone Age that flatbreads were made using wild grains. There isn’t any record of the puffed, pocketed pita until more recent times, so it’s more of a “modern” take on flatbreads. 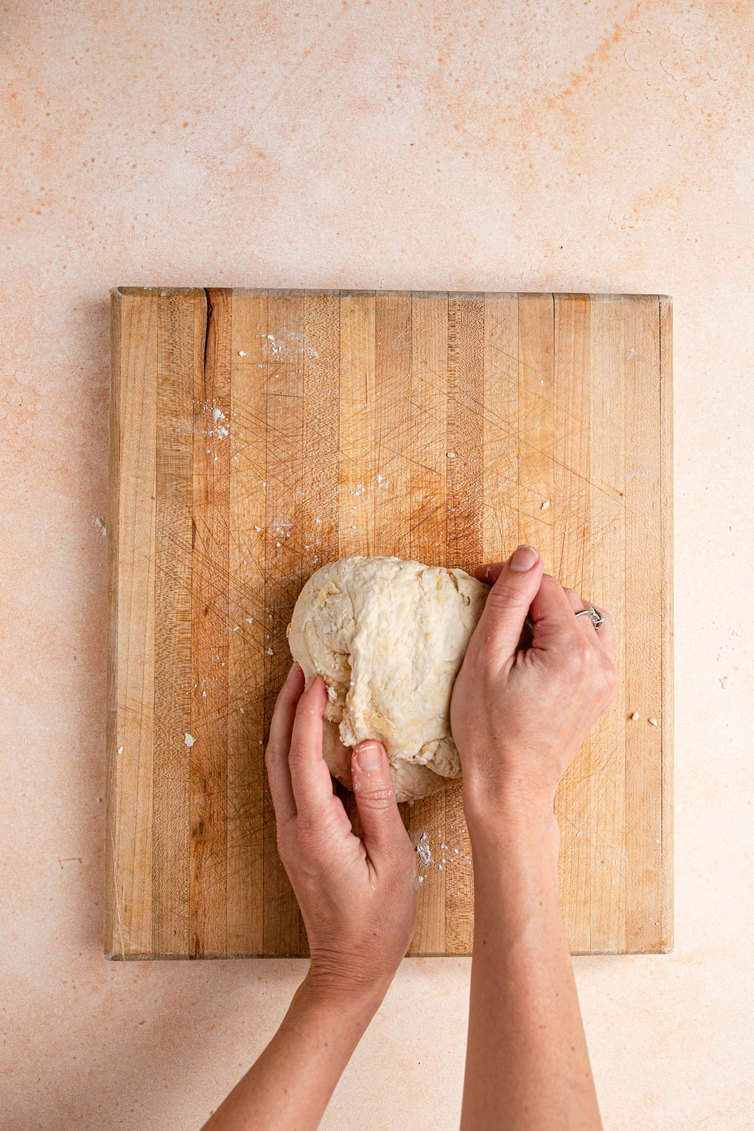 They look similar, but they are actually quite different! Here’s the breakdown: 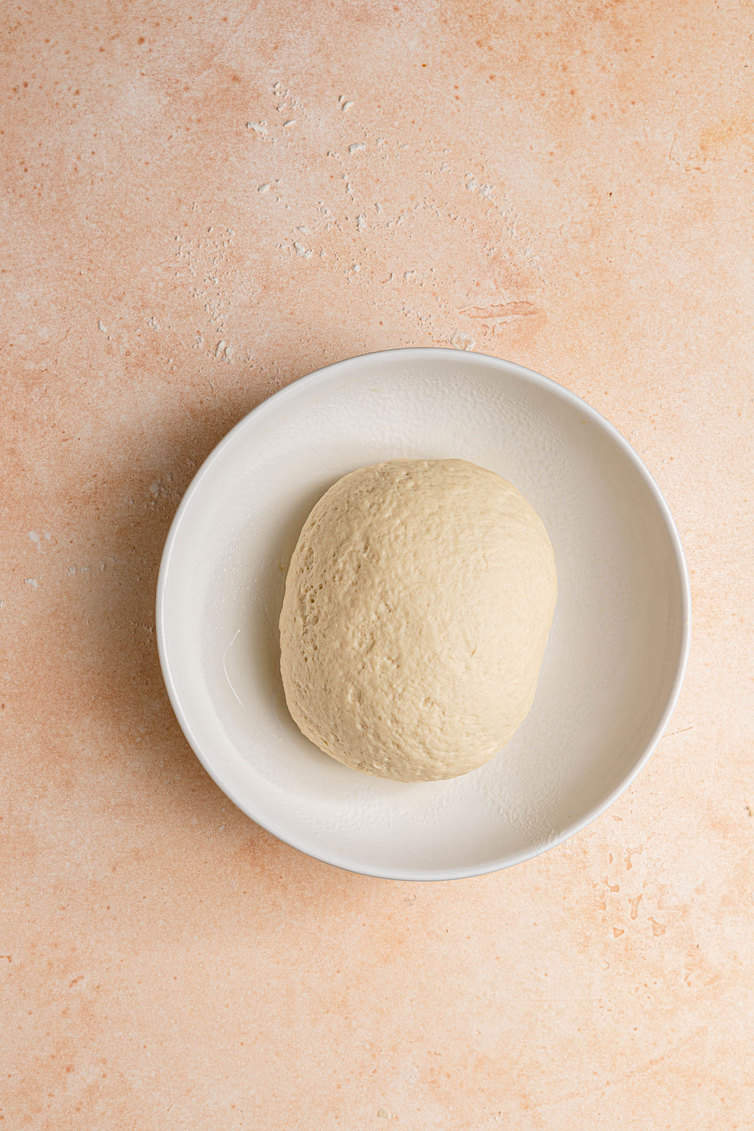 How to make it

It may look and sound intimidating, but it’s actually quite a simple process, let’s talk through it… 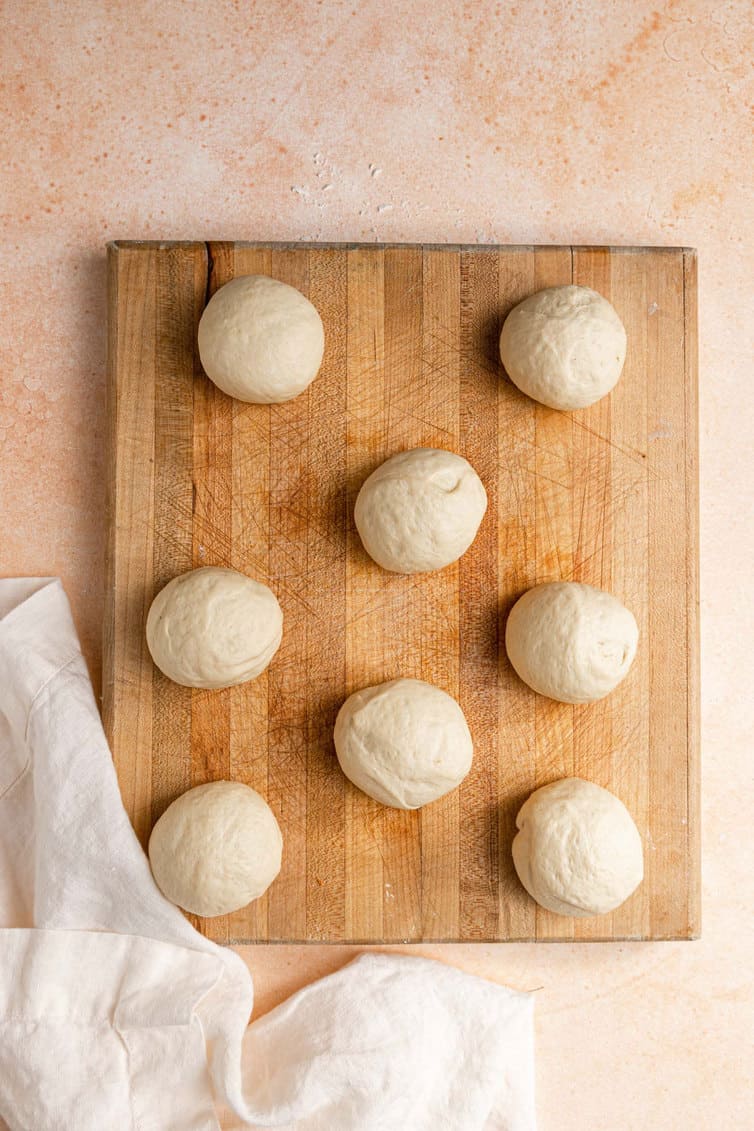 While an oven is the easiest way to cook pita bread since you can make them all at once, you can also make it on the stovetop if you want/need to.

Simply place a large nonstick skillet over medium heat. Cook the pitas, one at a time, flipping it over after about 10 seconds. Once the bread is completely puffed and has some brown patches, it is done. 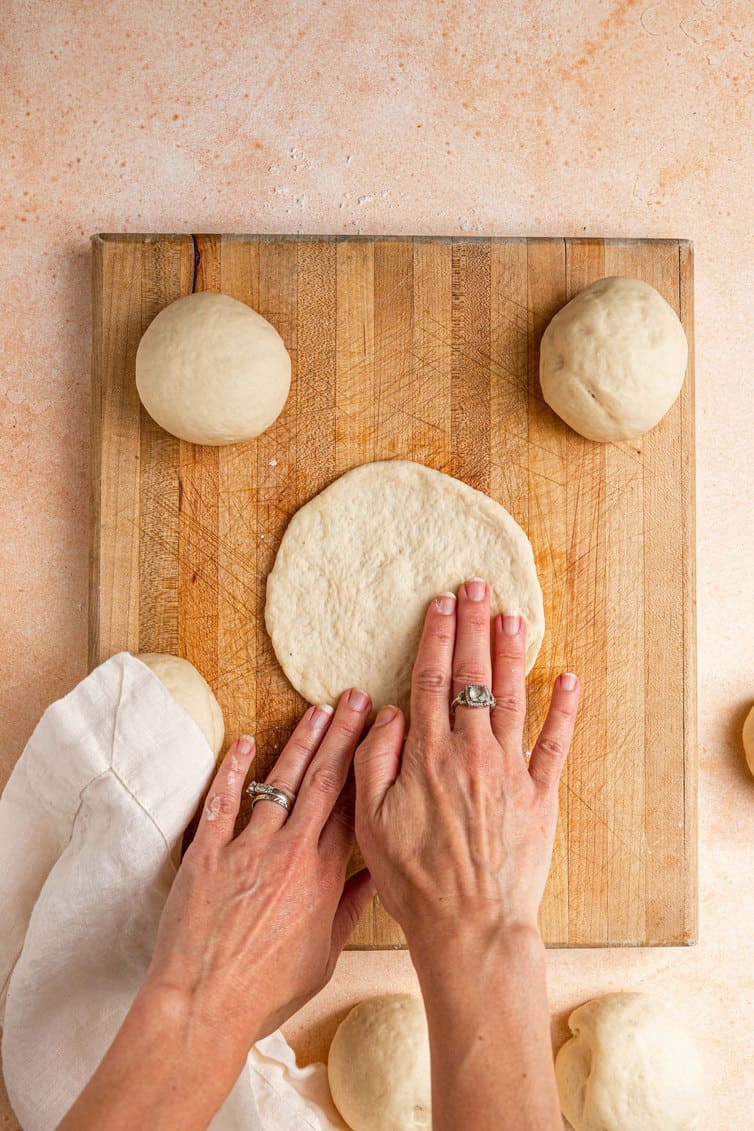 If you’re experiencing issues with pitas not puffing (ack, no pocket!), being difficult to roll out, or browning issues, read below for my key tips on making perfect pitas: 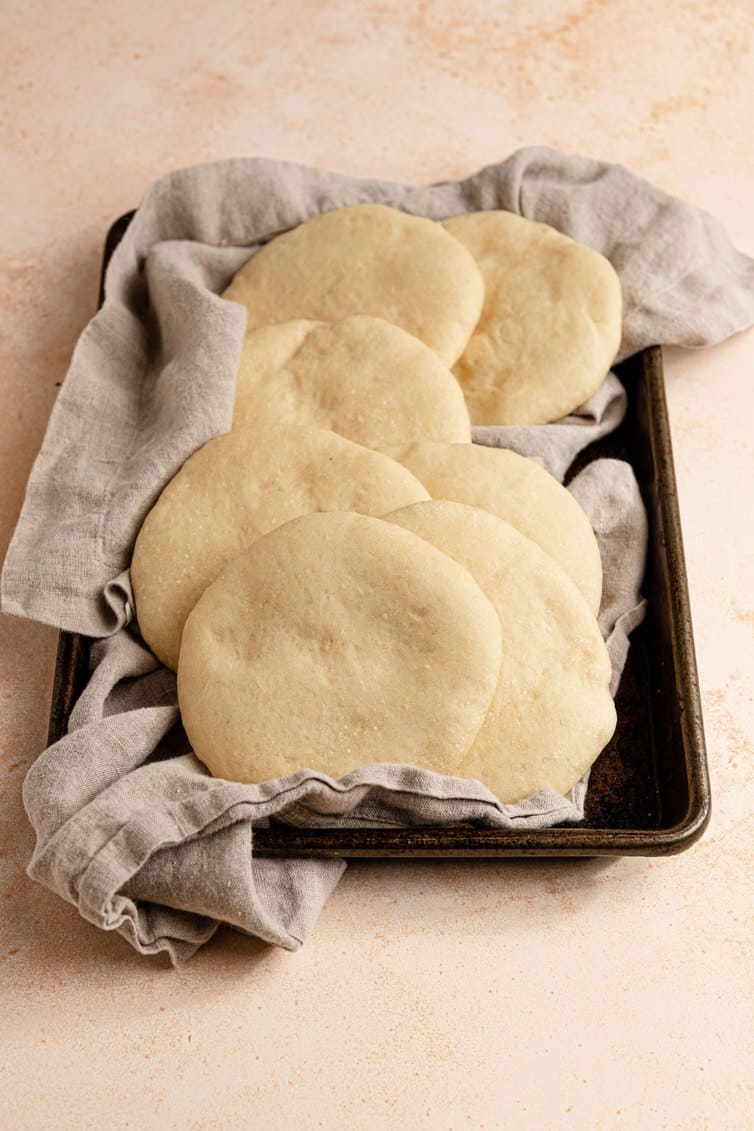 What to eat with pita bread 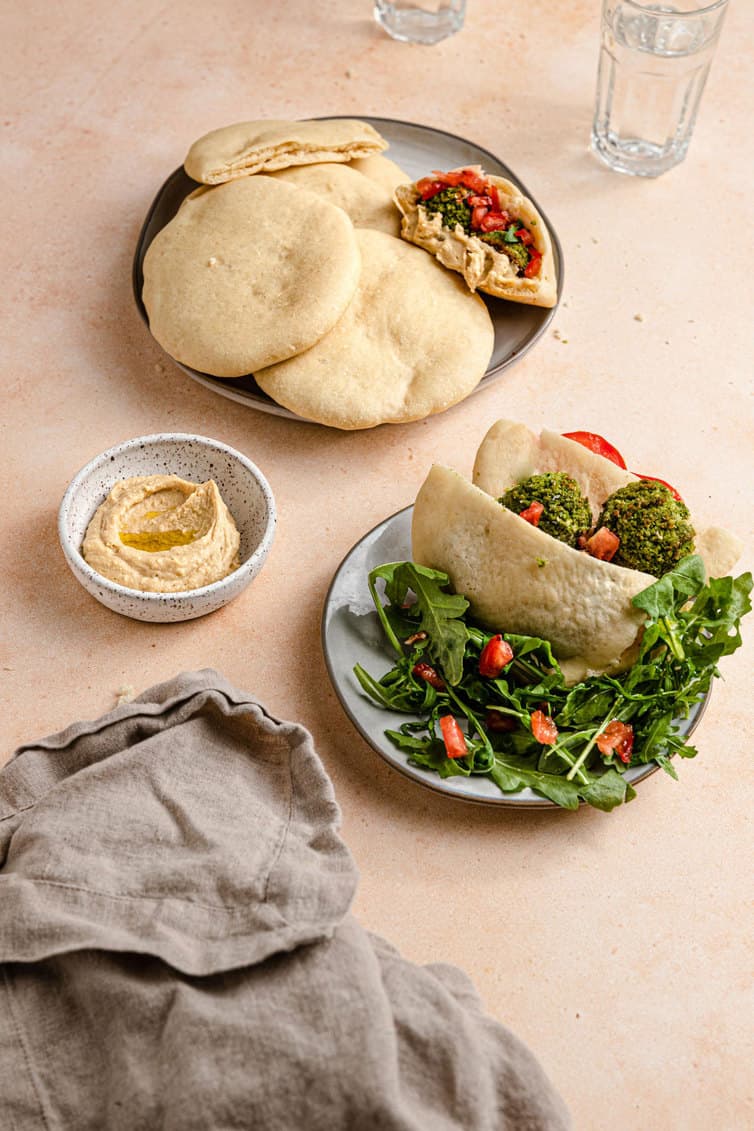 If you make this recipe and love it, I would so appreciate it if you would take a moment to leave a rating below. Thank you so much! ❤️️ 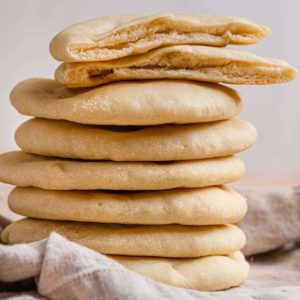 Yield: 8 pitas
Prep Time: 2 hrs 30 mins
Cook Time: 5 mins
Total Time: 2 hrs 35 mins
Learn how to make homemade pita bread with this simple recipe; I promise it's easier than you think! So much better than store-bought, you can use your pita for sandwiches, gyros, dipping into hummus... anything you'd like!
4.59 (12 ratings)
Print Pin Rate

[Photography by Dee of One Sarcastic Baker]