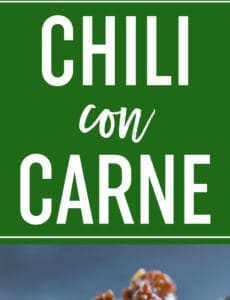 This version of chili con carne is made with chunks of beef, a homemade chili paste, and a couple secret ingredients. A great change of pace from my traditional chili recipe made with ground beef! 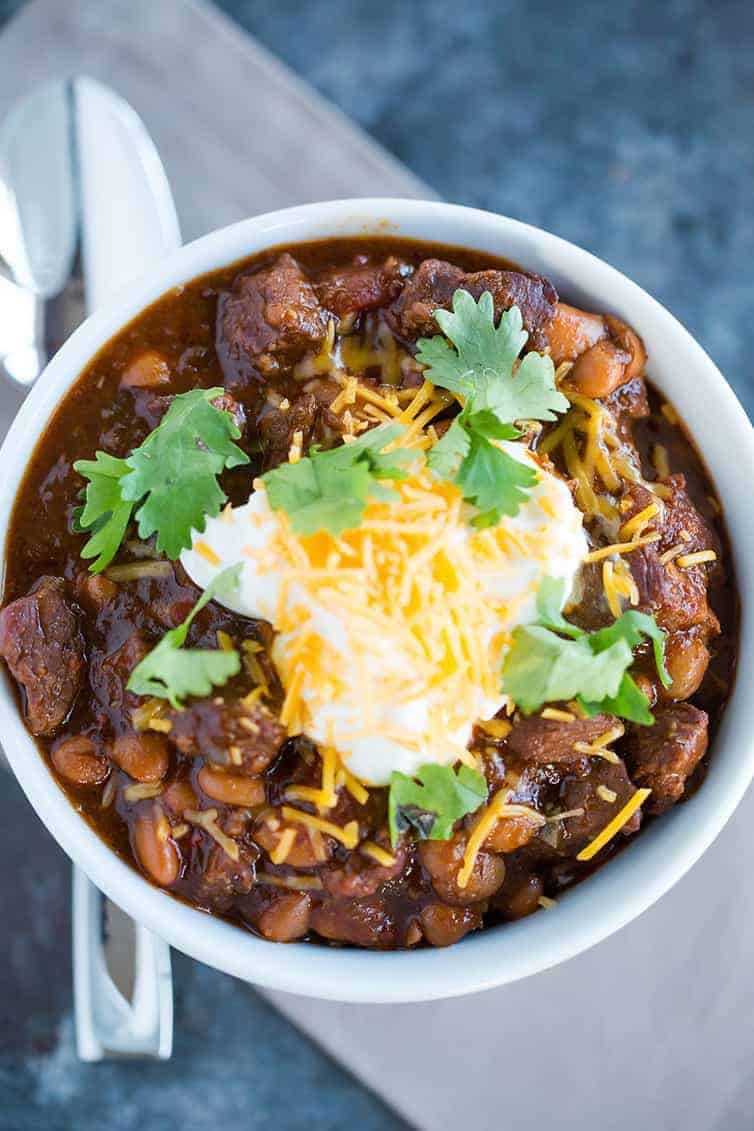 Behold the absolute, without question, best bowl of chili I have ever had.

I first came across this recipe seven or eight years ago in Cook’s Illustrated and although it seemed like a lot of work (it IS labor-intensive), it produced one of the most amazing chilis I had ever eaten. In fact, I think I ended up making it at least three times over the course of a month because my husband and I loved it so much.

This is certainly not your average chili… it includes a few “secret” ingredients like cocoa powder, molasses and beer. It uses dried chiles ground down to make a chili powder and paste instead of the typical chili powder. And it used chunks of beef instead of ground meat. At the time, this was all very unfamiliar ground to my chili palate, but it all sounded so irresistible.

I’m so glad I tried it all those years ago because it really is the most flavorful chili I’ve ever eaten. It’s bursting with flavor, and the meat becomes so tender that it melts in your mouth. 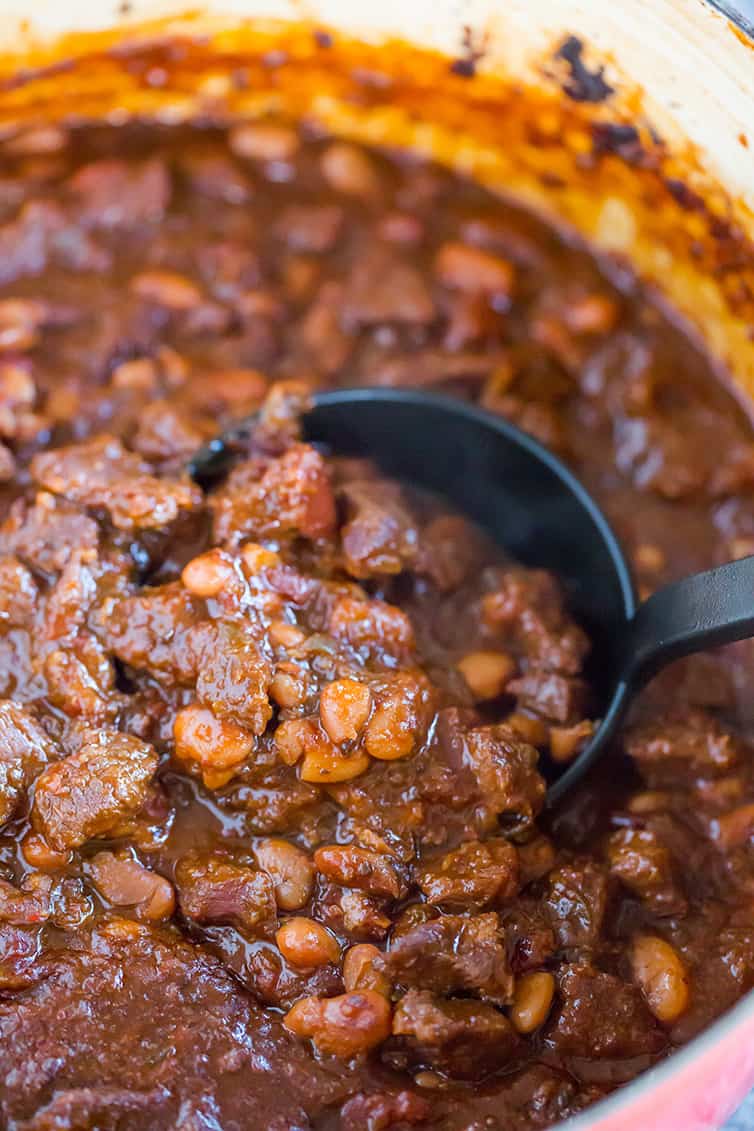 What Is the Definition of Chili Con Carne?

Then there’s the question of ground beef versus a cut of beef… since the technical definition is a “stew” I always err on the side of using a cut of beef cut into chunks, and I LOVE it this way! 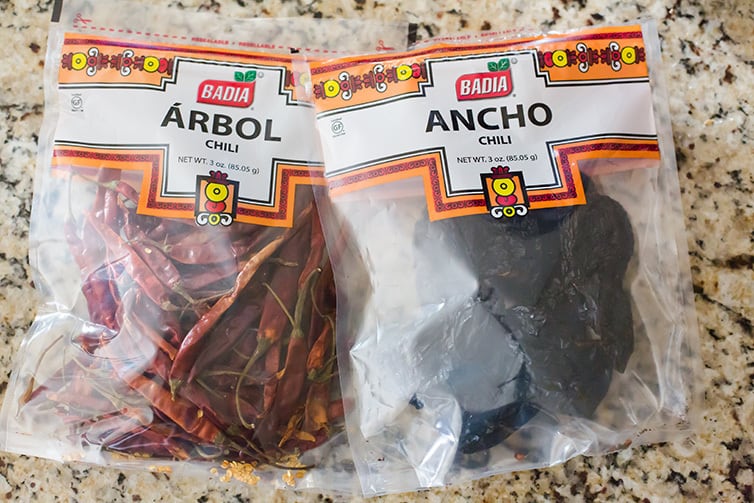 So, How Do You Make Chili Con Carne?

It probably won’t come as a surprise that there are literally thousands, maybe millions, of variations and recipes that you can find out there… ground beef, chuck roast, tomatoes, no tomatoes, beans, no beans, etc.

THIS recipe starts by soaking dried pinto beans, and although I think they certainly hold up better than canned, in a pinch you could certainly substitute canned beans. Next is a homemade chili paste using the dried chiles and additional seasonings (including cocoa powder!), pureed together with some chicken broth.

The first time that I made this recipe was my first time ever working with dried chiles, and I wasn’t sure if I would even be able to find them, but was pleasantly surprised when I found them at my regular supermarket. They were located in the international aisle, under the Hispanic foods.

Using the dried chiles to make a homemade chili powder and paste is one of the things that really sets this recipe apart from many of the other chili recipes I have ever tried.

After toasting the ancho chiles, you toss them into a food processor with the arbol chiles, salt, cornmeal, oregano, cocoa powder, and cumin… voila! Chili powder!

Then you slowly drizzle in a little chicken broth, and… voila! Chili paste! 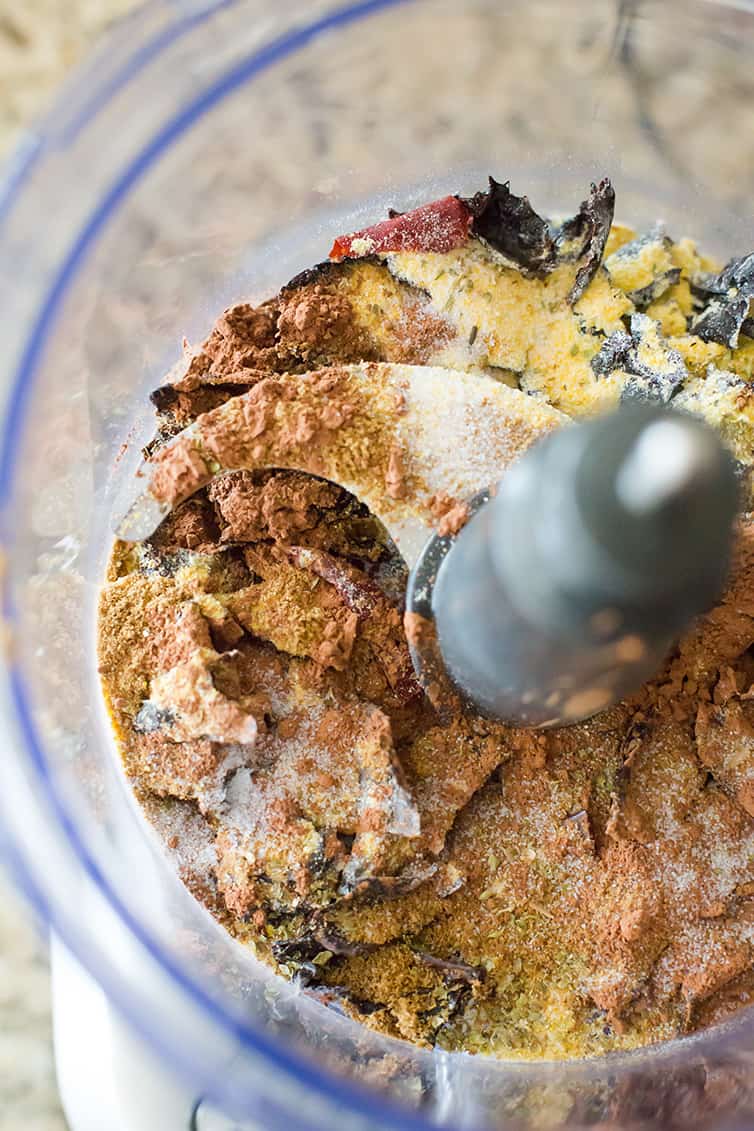 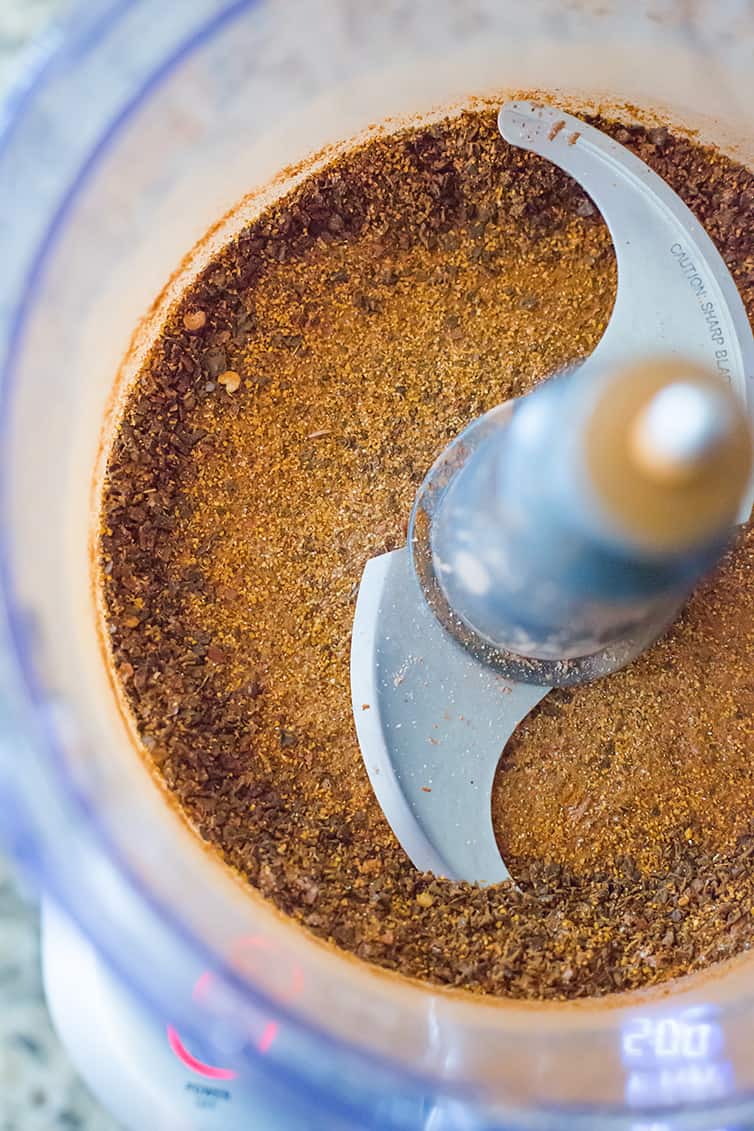 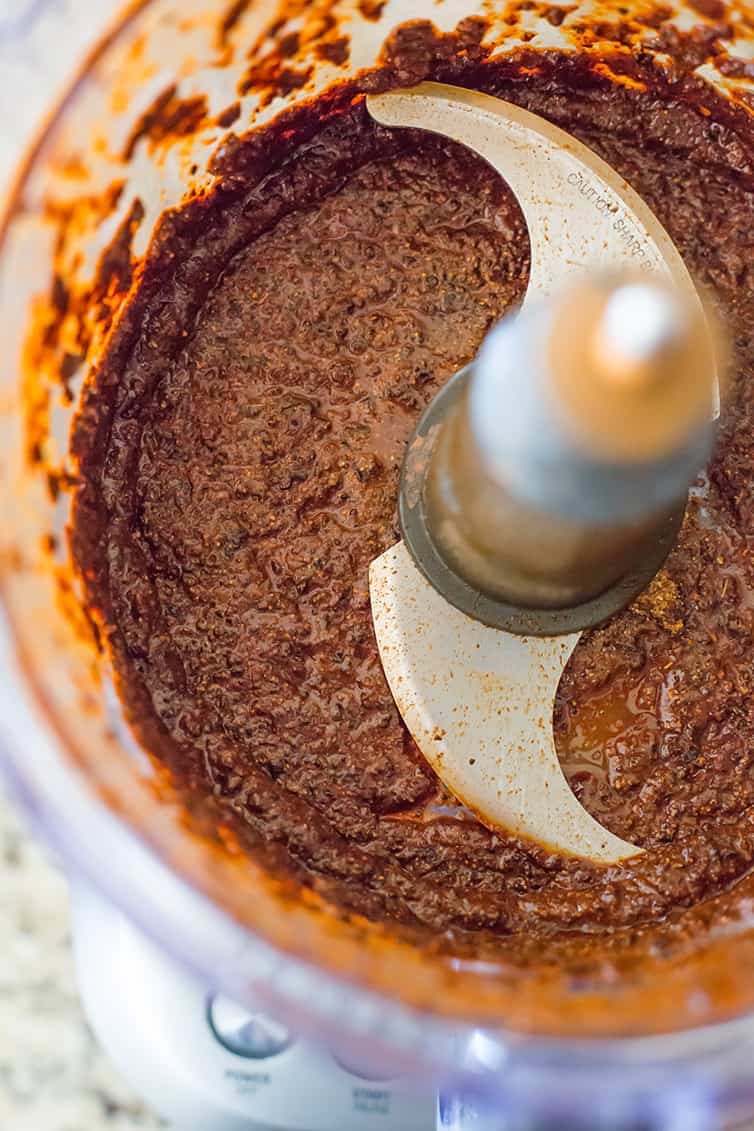 The rest of the recipe is pretty straightforward – the chunks of meat are seared and added to the chili paste, beans, onions and jalapeños, along with additional chicken broth, beer and diced tomatoes. It is cooked in the oven for a couple of hours, and then you’re ready to dig in!

I realize that this recipe is a far cry from the supremely easy classic beef chili that is my personal chili go-to because it’s so simple, so I have a bunch of notes that may help you out…

What To Serve with Chili Con Carne

Garnishments and side dish possibilities are truly limitless, but when I make this, these are the toppings I put out for people to choose from: 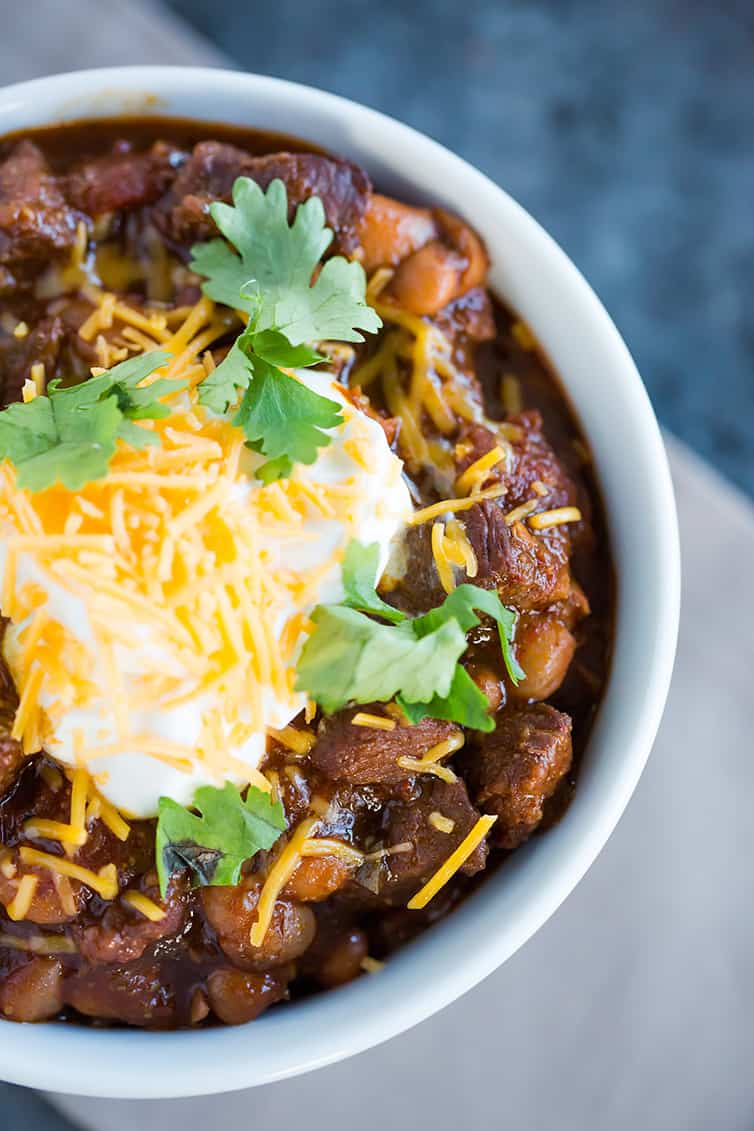 This certainly is not a fast, whip-it-up-when-I-get-home-from-work type of chili. This is a hunker down on a rainy or snowy Saturday and make this for a cozy night in. It’s time-consuming, but if you can make the time for it, it’s absolutely worth every minute. Plus, you could make a big pot over the weekend and then freeze it in portions for a rainy day, so to speak.

Although I don’t make this chili recipe as I do others, it’s by far one of my two favorites and has an unbelievable amount of texture and flavor in every bite. These cold winter days are a perfect opportunity to give it a try! 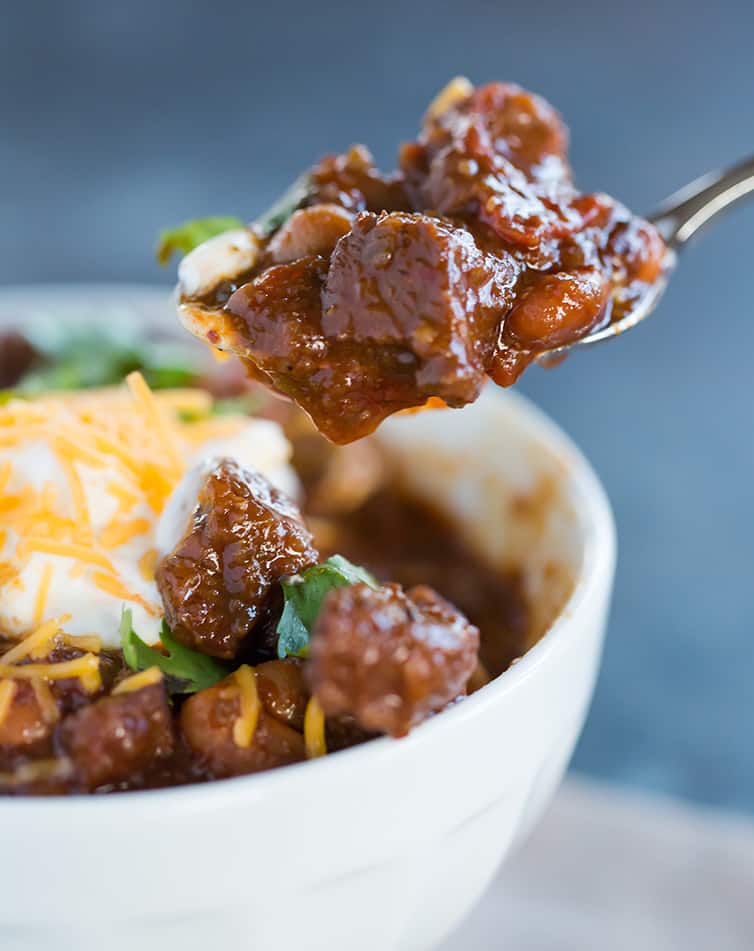 One year ago: Cheesy Chicken with Mushrooms
Six years ago: Goody Goody Bars 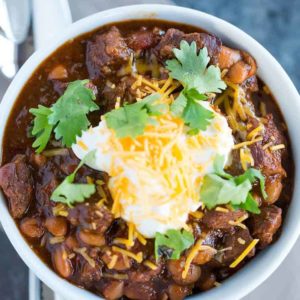 Yield: 6 to 8 servings
Prep Time: 2 hrs
Cook Time: 2 hrs
Total Time: 4 hrs
This version of chili con carne is made with chunks of beef and a homemade chili paste. A great change of pace from chili made with ground beef!
4 (8 ratings)
Print Pin Rate

This recipe was originally published on October 27, 2011.