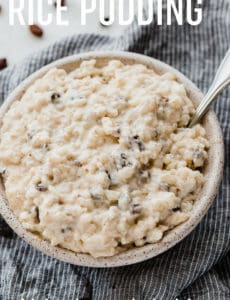 This classic stovetop rice pudding recipe is wonderfully creamy, flavored with cinnamon and has bourbon-soaked raisins stirred in at the end. 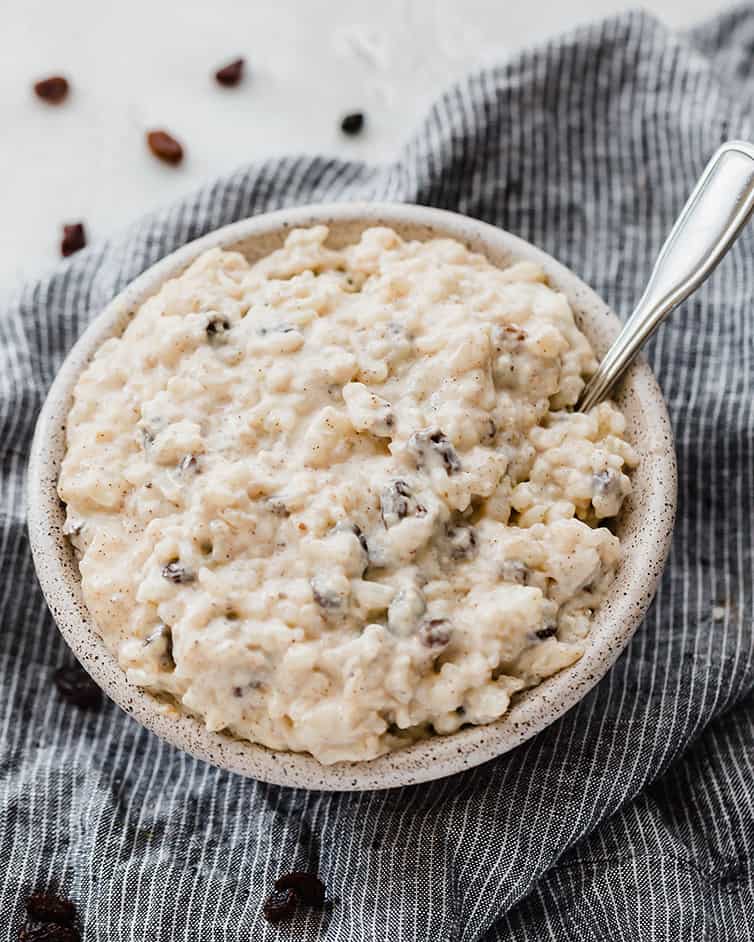 I was always that person that gave rice pudding the side eye. You know, the skeptical sideways glance that said, “Maybe, but deep down, I know I won’t like it.” For years, I had the hardest time wrapping my head around a sweet dessert that was based primarily on rice. Rice, as far as I was concerned, was meant to be served alongside chicken and a salad.

Then I started seeing rice pudding pop up in a number of places. At first, my initial reactions were the same – I just couldn’t get into it. Before long, I was starting to feel a little tug at my taste buds. Most of the rice pudding dishes I was seeing looked not just good, but down right delicious.

Once I finally tried it, I realized that I had been missing out on an amazing dessert – rich and creamy, loaded with flavor, and absolutely worthy of being deemed comfort food. 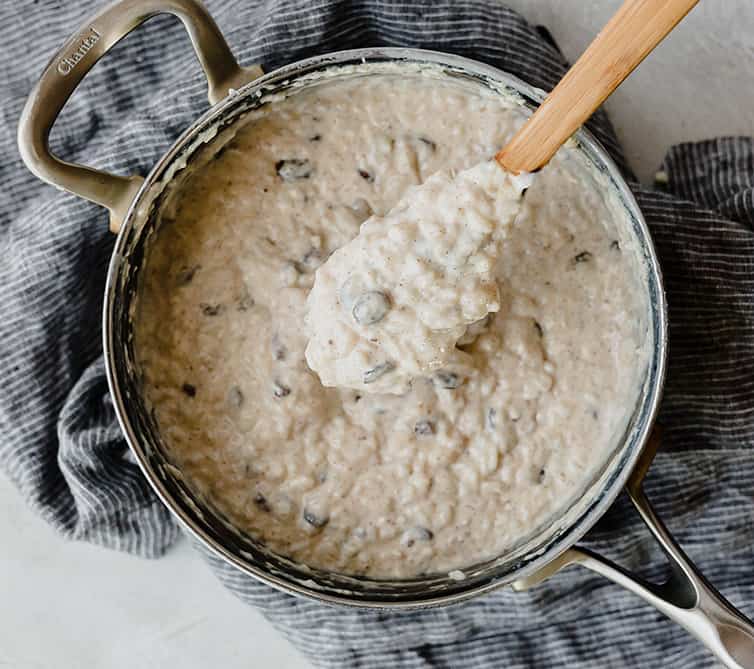 How Do You Make Rice Pudding?

What I failed to realize during my unofficial boycott of rice pudding is that it’s very much a dessert version of risotto. Rice pudding uses the same basic premise as risotto (slow and steady with lots of stirring!), but instead of broth, you use water, milk, and cream to achieve a creamy, pudding-like consistency with the rice.

Once you add your flavors of choice – here we have bourbon, raisins, vanilla, and cinnamon – this dessert reaches an entirely new level. 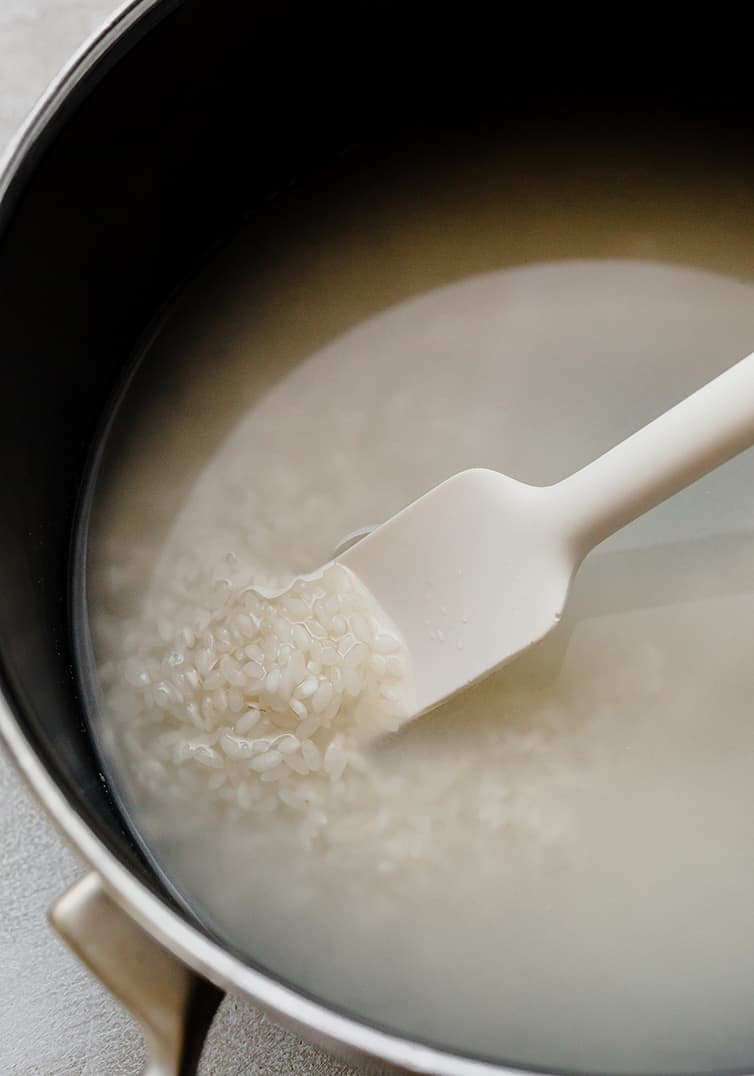 What Is the Best Type of Rice to Use for Rice Pudding?

Medium-grain rice is ideal and will produce the creamiest rice pudding.

The most common type of medium-grain rice is Arborio, which is typically used in risotto. That makes sense because rice pudding is basically a milky sweet version of risotto! 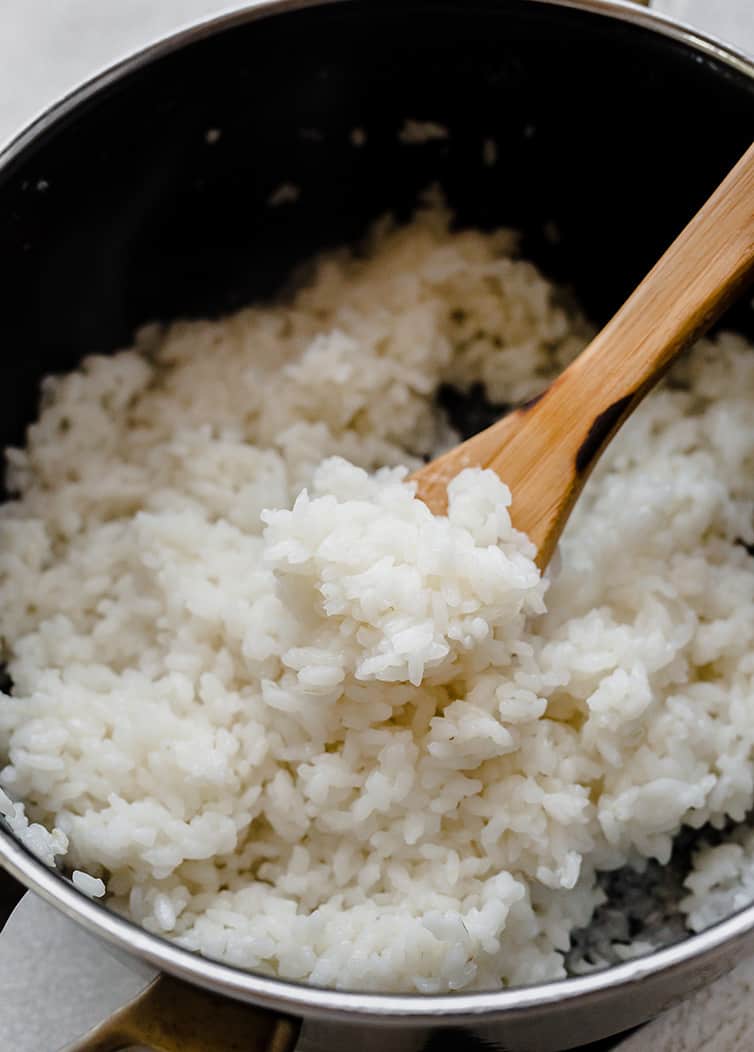 Is Rice Pudding Supposed to Be Served Hot or Cold?

You can eat it either way!

Eat it warm straight from the stove, or reheat with a splash of milk to get it back to that just-cooked creamy consistency.

On the flip side, you can also eat it chilled, which many people prefer.

I’ve eaten it warm, at room temperature and chilled, and can honestly say I enjoyed each one, and don’t really have a favorite. It has a creamier consistency when warm, and then firms up a bit as it cools, so go with whatever your personal preference is! 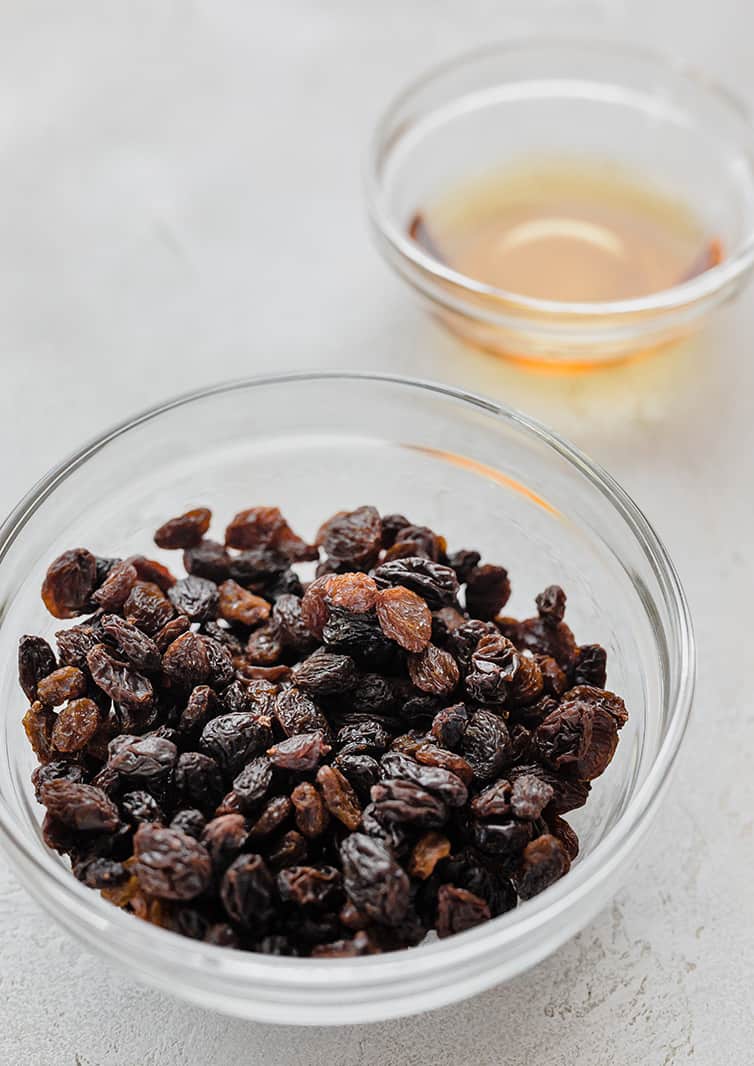 How Do You Make Rice Pudding in the Oven?

Baked rice pudding is completely different than this stovetop version. Most baked rice puddings are made with eggs and assembled in much the same way as you would a bread pudding. For this version, you usually use cooked rice and combine it with a custard mixture and bake it in a water bath. I’m loving this old-fashioned recipe.

Since you use cooked rice, it’s a perfect dessert to make with leftover rice! 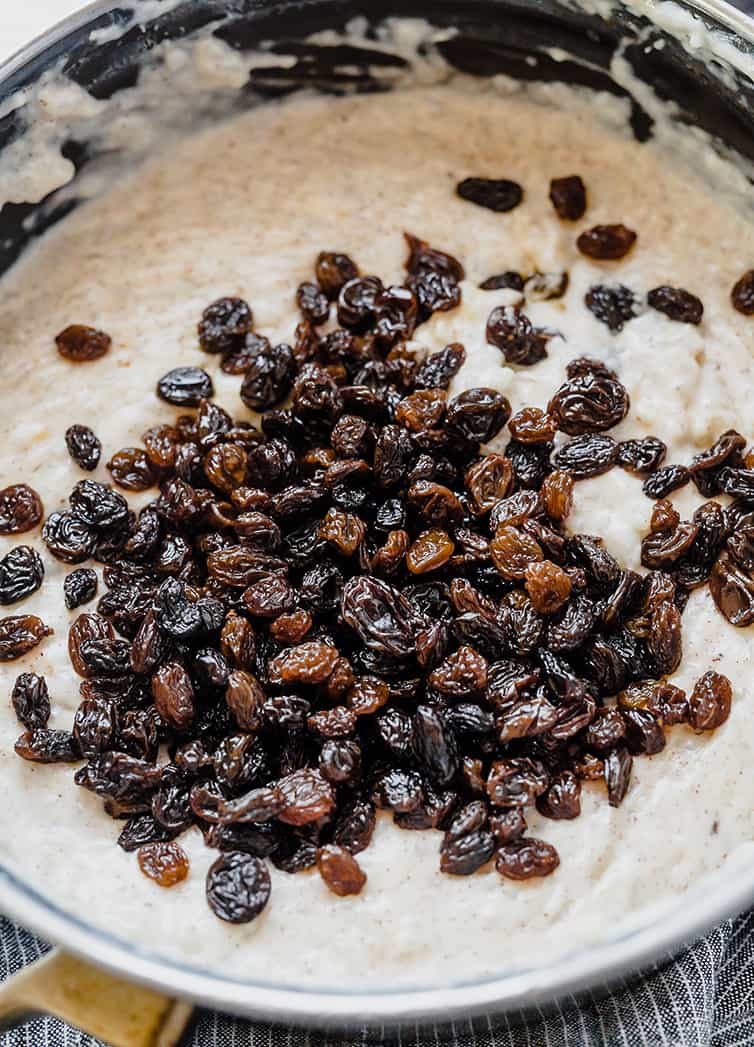 The flavor combinations here are virtually limitless, although it seems that cinnamon and raisins are fairly traditional when it comes to rice pudding. I couldn’t help but to soak the raisins in bourbon; after doing so in other recipes, I’ve found that it gives a nice extra kick of flavor.

Do you have a favorite type of rice pudding? Maybe one your mom or grandma always used to make? I’d love it if you shared it in the comments below! 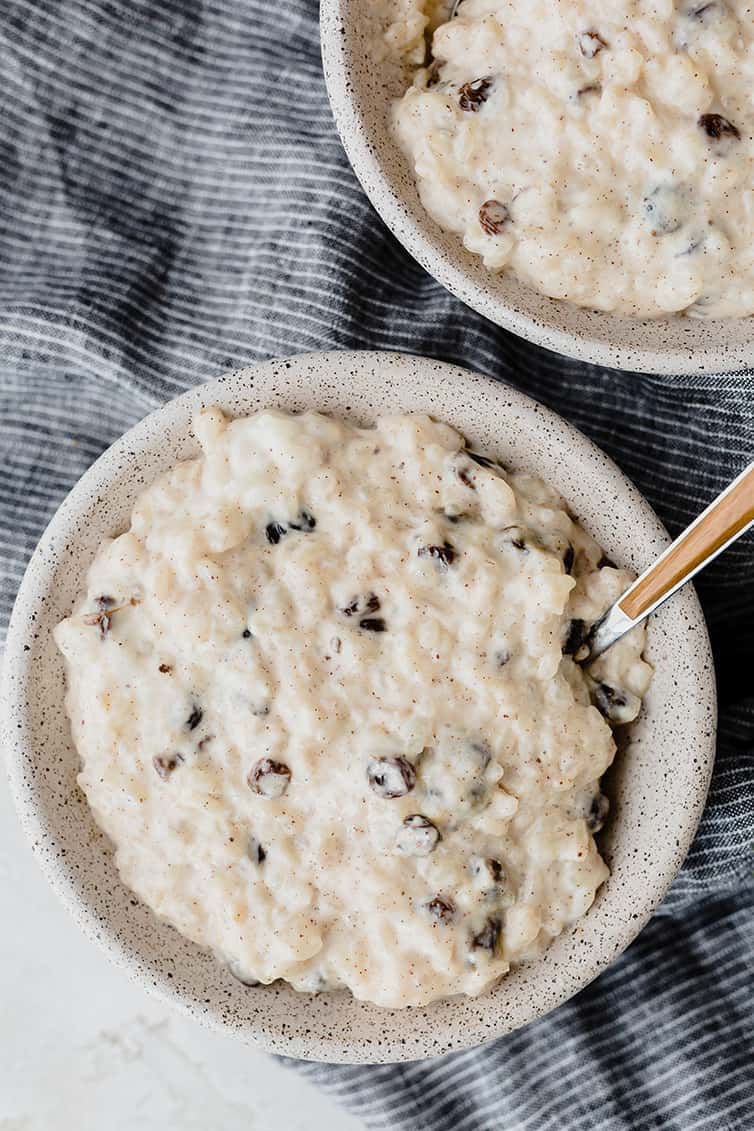 If You Like This Rice Pudding Recipe, Try These: 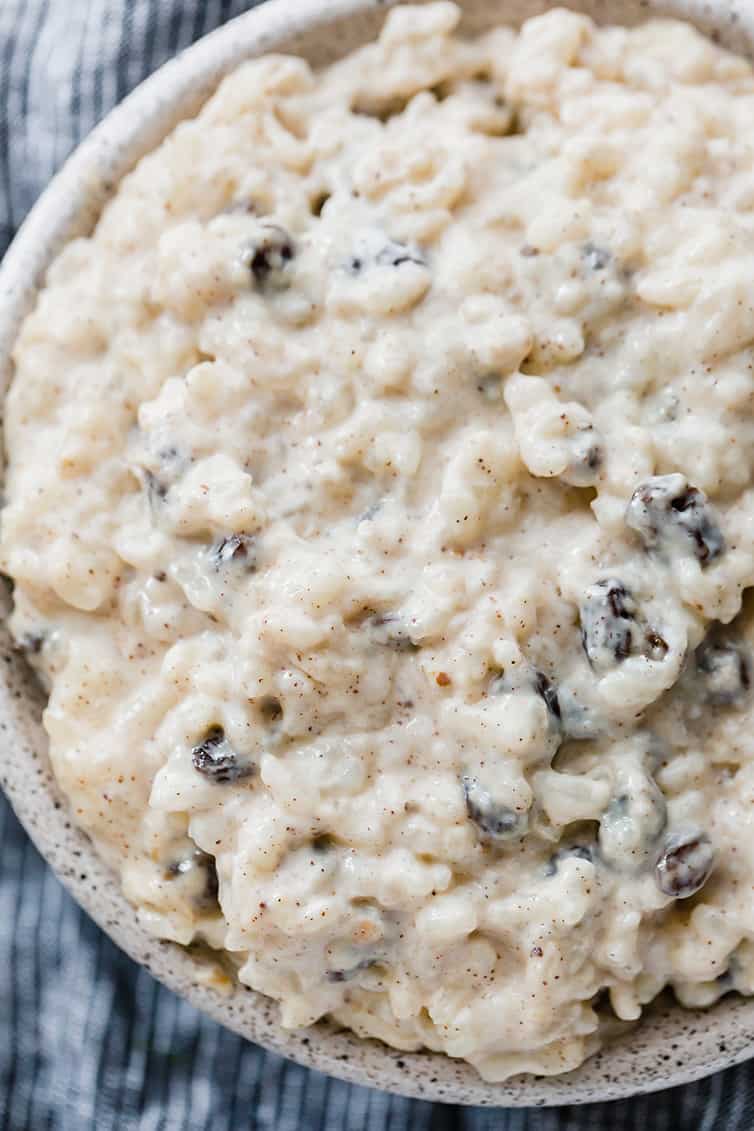 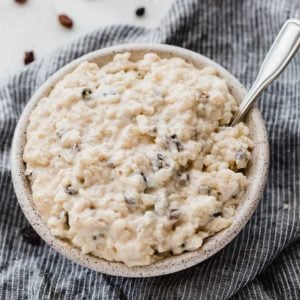 This recipe was originally published on April 10, 2012.