These slow cooker Korean short ribs are incredibly easy and packed with tons of flavor; the meat is tender and falls right off the bone!

When I asked my husband recently if he was hungry for anything in particular for Sunday dinner, he requested macaroni and cheese, which… yum. I thought about what I could make to go along with the mac and cheese, and I remembered a fantastic meal that I had at a local restaurant a few years ago – short ribs mac and cheese. It took all of a few seconds for to decide on short ribs to go along with the mac and cheese, but I wanted to try a new recipe. I made slow cooker short ribs a couple of years ago, but I was in the mood for something a little different. After poking around at some different recipes, I settled on Korean short ribs, which I had never eaten before, but been wanting to try.

These were a MASSIVE hit at dinner and definitely a recipe that will have a prominent place in my “keeper” file. 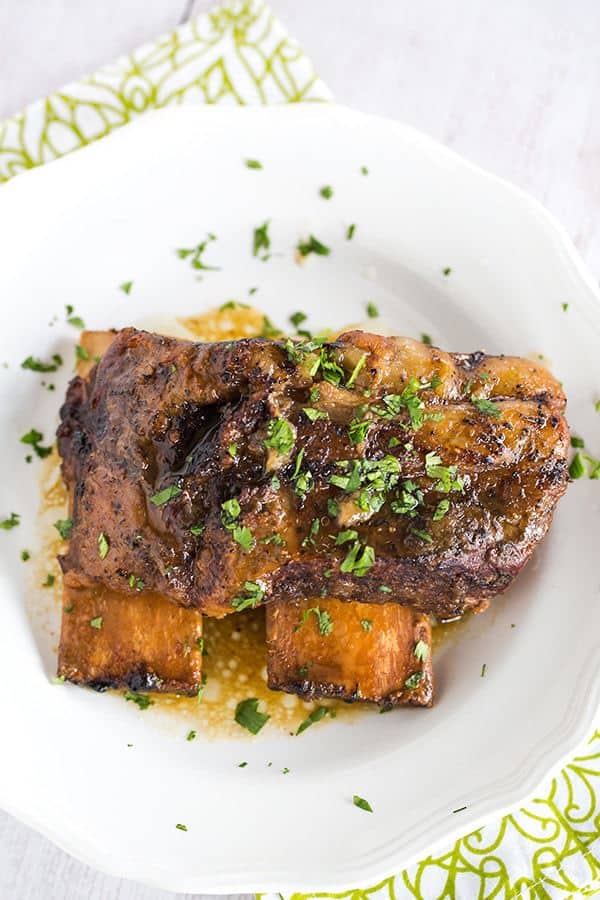 The master recipe for this dish comes from America’s Test Kitchen’s Slow Cooker Revolution cookbook, but I made a major tweak based on the recipe over on Nom Nom Paleo. The original recipe calls for separating the meat from the bones, and then microwaving the bones in order to add a deeper roasted flavor to the braise. Michelle’s version called for simply broiling the racks of ribs before popping them into the slow cooker. This seemed infinitely easier (and less messy), so that’s the route that I went, and the result was extraordinary.

If you’re short on time, you could even skip that step and just throw the short ribs straight into the slow cooker. Everything else gets dumped in as well, so no browning on the stovetop or sautéing ingredients before putting them in… my favorite kind of slow cooker recipes!

Previous to this recipe, I had always purchased the short ribs that are known as English short ribs – there are individual pieces of meat and each piece has a single bone running through the length of it. The other variety is known as flanken short ribs, which look more like a traditional rack of ribs, with several bones running through the meat. That’s the type that I purchased, because it looked like they had a bit less fat, but you could use either type for this recipe. 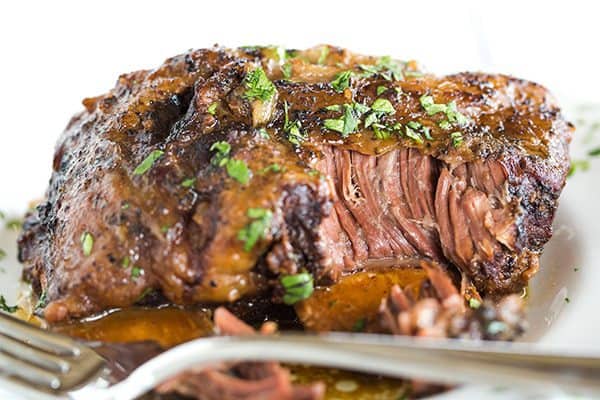 The base for the sauce is made of some traditional Asian ingredients, like soy sauce, garlic, scallions and fish sauce, and along with a sweet pear and some garlic, makes for an absolutely phenomenal braising liquid. The meat just falls right off of the bone and is incredibly tender. I also loved having some extra sauce to pour over the short ribs when we sat down to eat – so much flavor!!

Needless to say, these slow cooker Korean short ribs were a fantastic accompaniment to the macaroni and cheese for dinner, and would be a fantastic choice for dinner any day of the week. 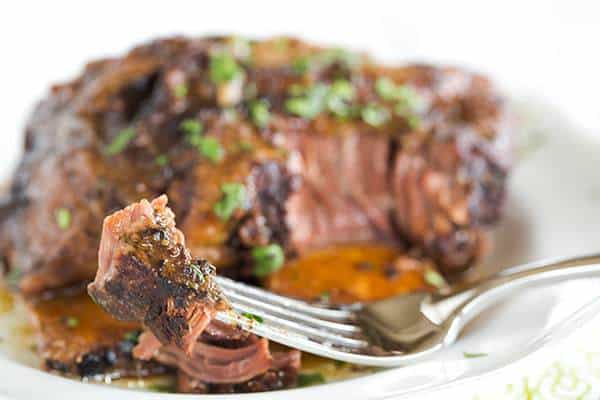 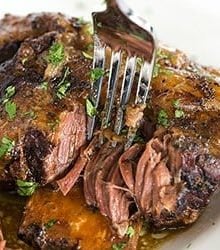