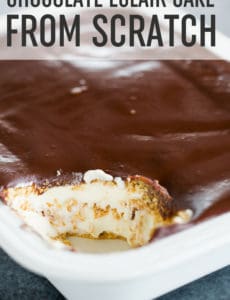 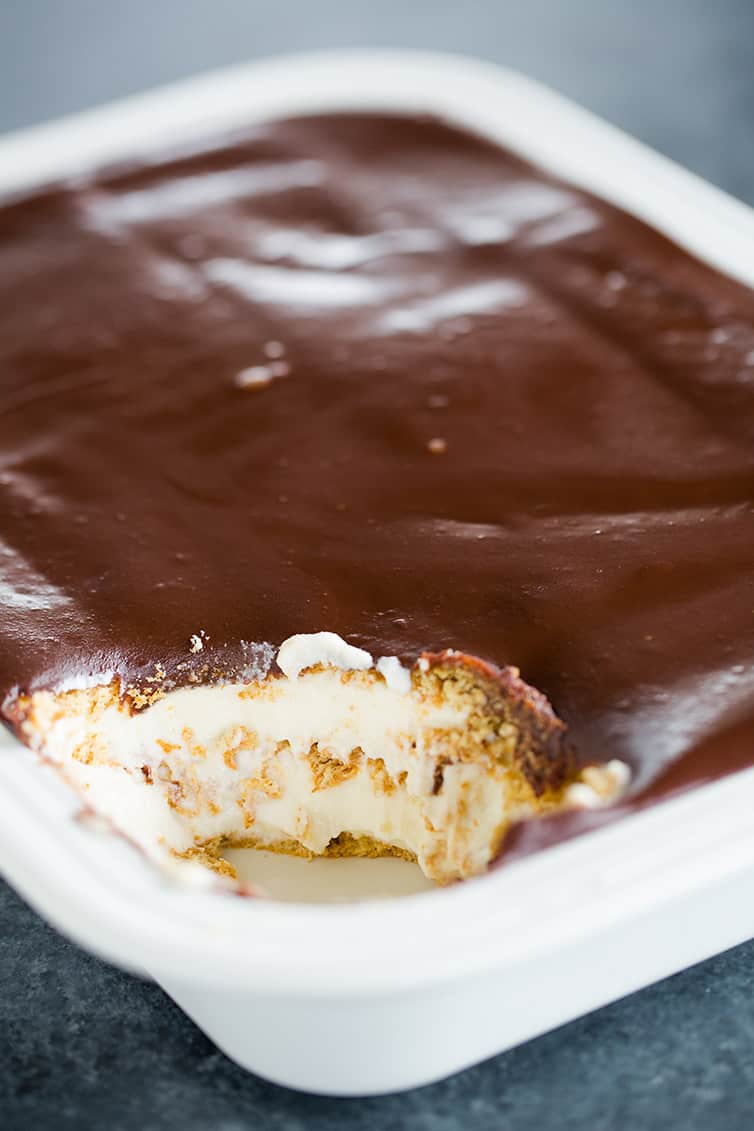 Growing up with Sunday dinners at my grandma’s house, there were two desserts that stayed on constant rotation throughout the summer: store-bought angel food cake with strawberries and Cool Whip, and my grandma’s icebox cake. (There was also usually ambrosia in the fridge, because of course there was.)

My grandma’s icebox cake was a simple layering of graham crackers with instant vanilla pudding, and (sometimes) a layer of Cool Whip on top. Totally unassuming but the best kind of comfort food, just like my grandma. It wasn’t until a few years ago when I started to see what looked like familiar icebox cake turn up on Pinterest, but it had CHOCOLATE FROSTING on top. I couldn’t imagine my childhood favorite being made any better, but if there was one way to do it, it would most certainly be to add chocolate!

It wasn’t until I saw this chocolate eclair cake recipe show up in a recent Cook’s Country magazine that I decided to try it. I loved that the pudding filling was made from scratch and lightened up a bit with whipped cream. I was taking icebox cake up a notch! 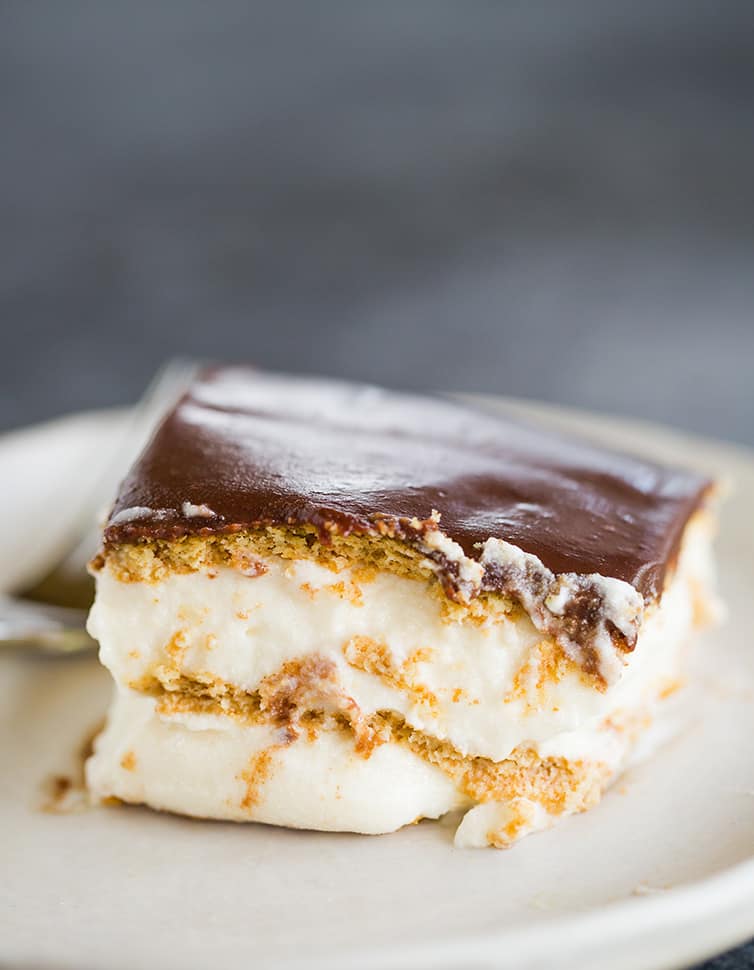 How Do You Make Chocolate Eclair Cake?

Chocolate eclair cake is a very basic icebox cake made with layers of graham crackers and vanilla pudding, and topped with a chocolate icing.

Most of the old-school chocolate eclair cakes call for the pudding layers to be made with instant pudding that’s mixed with a little Cool Whip to lighten the texture, and then topped with a chocolate ganache (or, if you’re pressed for time, canned chocolate frosting).

However, THIS is a chocolate eclair cake made from scratch! What does that mean?

Do I Have to Use Gelatin in the Whipped Cream?

Yes, for the whipped cream to be stabilized, the gelatin must be included. Otherwise, you’ll be left with a runny (and potentially watery) pudding filling. If you are vegan and/or do not want to use gelatin, I’ve read that agar agar can be used as a substitute. I have not personally tried this, so I can’t vouch for it in this recipe, but I would start there.

Do I Have to Use Corn Syrup in the Chocolate Ganache?

The corn syrup helps to keep the ganache flexible when it sets, which means it will be firm but is soft when cut through with a spoon or fork. This makes it easier to eat; otherwise, you’ll have a rock-hard ganache on top that will crack and break when you try to slice it or eat it. You can omit the corn syrup if you prefer, just be aware of the potential difficulty when slicing and eating.

Does Chocolate Eclair Cake Need to be Refrigerated (and Can it Be Frozen)?

It’s imperative that the dessert is refrigerated before serving and that any leftovers remain refrigerated until eating. However, if you want an ice cream-like dessert or just want to keep it in the freezer for a date in the future, refrigerate it as directed to allow it to set first, then cover with plastic wrap, then tightly with foil and freeze for up to 1 month. 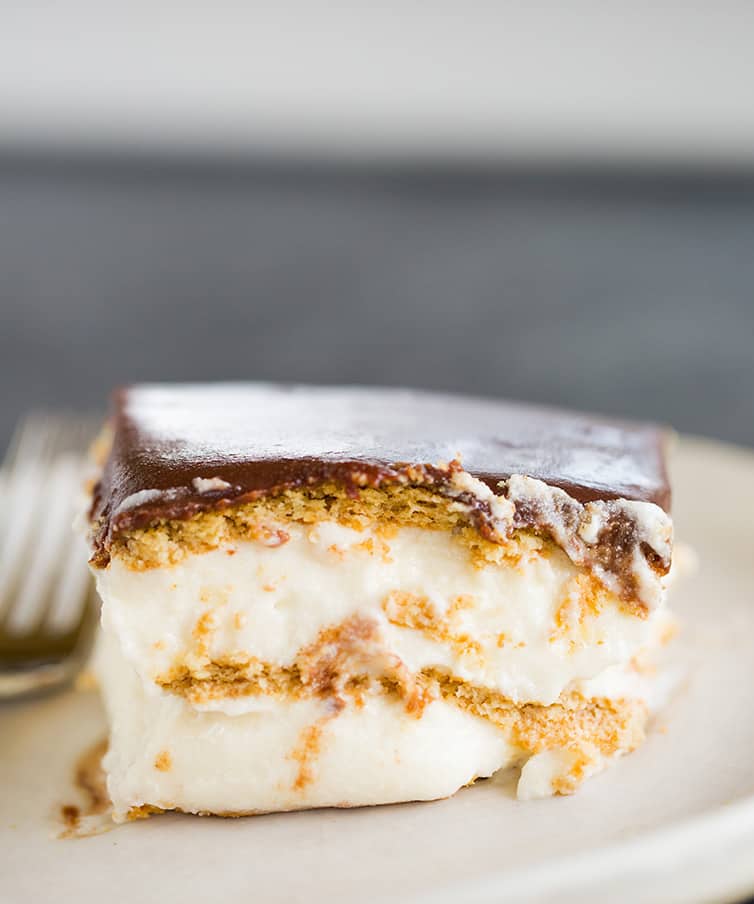 So, there you have it – chocolate eclair cake made from scratch (minus the graham crackers)!

I loved how much this reminded me of my grandma’s icebox cake, but I just adored making it totally homemade and I am all about that chocolate ganache topping. I don’t think I’ll make another icebox cake without it again!

If you like this Chocolate Eclair Cake, Try These: 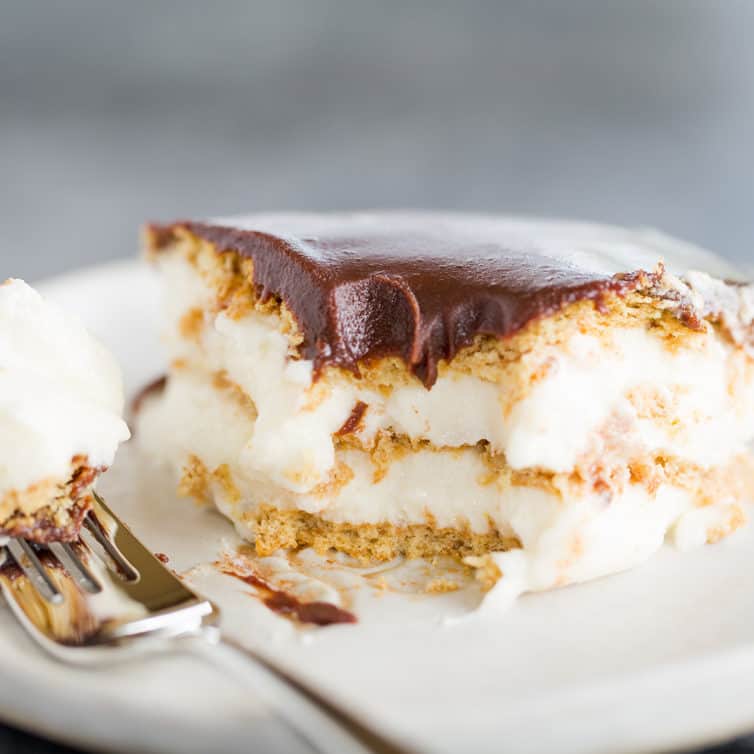 For the Stabilized Whipped Cream

For the Chocolate Glaze