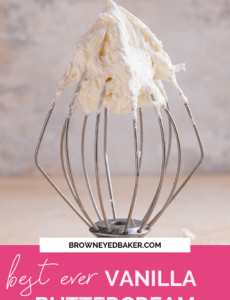 This vanilla buttercream frosting has been my go-to recipe for well over a decade and is absolutely the best! Made with four ingredients and ready in under 10 minutes, you can whip this creamy frosting up in no time. Buttery, silky smooth, and not too sweet, make this fluffy buttercream frosting for cakes, cupcakes, and more!

Why You’ll Love This Frosting

You know I am ALL about the frosting when it comes to a moist cake. From rich chocolate to tangy cream cheese, the right frosting just makes a slice of cake better.

Of all the frostings out there, American buttercream is the easiest of the buttercream frostings to make and comes together in under 10 minutes making it the perfect option when you are looking to make a last-minute frosting for a cake or cupcakes.

While there are a number of different buttercream options, the three most common include American, Swiss, and Italian. Each are made in unique ways and depending on what you plan to frost may suit your needs better.

With just 4 simple, pantry-staple ingredients, this homemade buttercream frosting whips up in no time.

My favorite way to tint vanilla buttercream frosting is with gel food coloring. After making the frosting, it’s ready to color.

One unique feature of the American buttercream frosting is its ability to crust. Once piped and exposed to air the frosting will form a thin crust on the outside making it ideal for piping, especially detailed designs on cakes and cupcakes. Here are a few different tips you can use to pipe with buttercream.

Many of these recipes come with suggested frostings, but if you are looking for a way to switch up these treats pair perfectly with this vanilla buttercream frosting.

Making Ahead and Storing

Whether you are looking to make this frosting in advance or you have extra buttercream frosting leftover, there are a few different ways you can store it.

Can you over-whip buttercream frosting?

It is possible to over-whip buttercream frosting. It will add additional air pockets to the frosting which in turn will make piping the buttercream difficult.

What is the difference between buttercream and icing?

Buttercream has a thick, fluffy consistency which comes from whipping the butter with the powdered sugar.

Icing on the other hand has more of a thinner and glossier consistency due to a higher liquid content.

Can you leave buttercream frosted goods out overnight?

Yes, but I would store them in an airtight container to prevent them from drying out.

Ultra-rich and creamy, this vanilla buttercream frosting is perfect for all your cake topping needs! Not too sweet, easily pipe-able, and super fluffy, this buttercream will hit the spot! 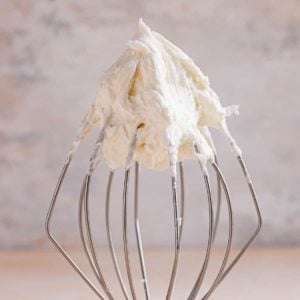