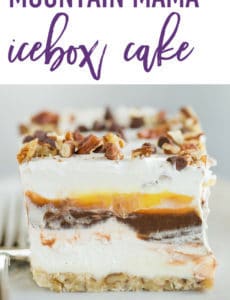 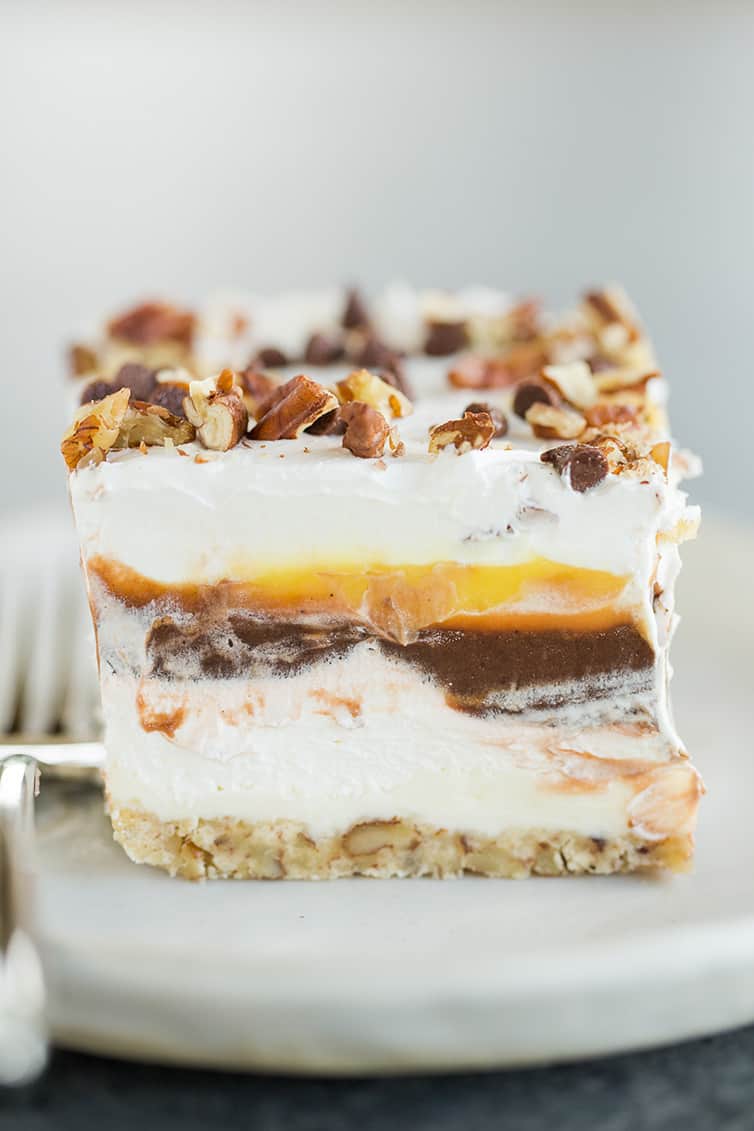 When it comes to recipe inspiration, I LOVE cookbooks and food magazines, but there’s something I love even more – recipes that come from my family, friends, and YOU! It is the best when someone loves a recipe enough to want to share it, and I am thrilled each and every time one of you takes the time to send me a recipe. If it’s been served at your grandma’s Thanksgiving table for the last 30 years, odds are it’s an amazingly good recipe!

This mountain mama icebox cake is one such recipe, sent to me by a reader, Nancy. She said that the recipe hails from a church cookbook (are those not the best kind?!) from St. Michael Parish in Louisiana, which was given to her by a friend from Louisiana.

While it’s called icebox cake, it’s very reminiscent of the many “lush” desserts that I’ve come to recognize over the years – a nutty crust with layers of cream cheese, different puddings, and whipped topping. This one appears to be the absolutely ultimate with a whopping SIX layers! It is absolutely divine. 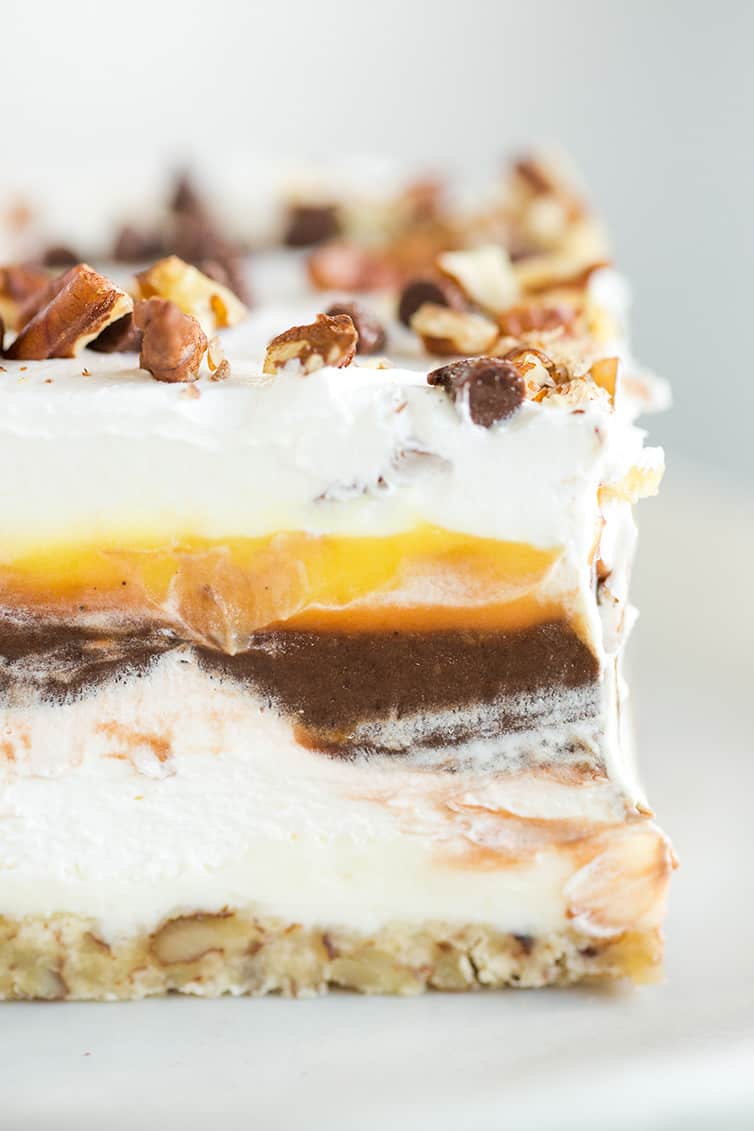 Let’s dissect these layers, shall we?

On the bottom is a pecan-shortbread crust that’s baked in the oven to get it nice and firm. That’s the only time we need to use the oven, so it’s a great recipe to have on hand when it’s sweltering outside. 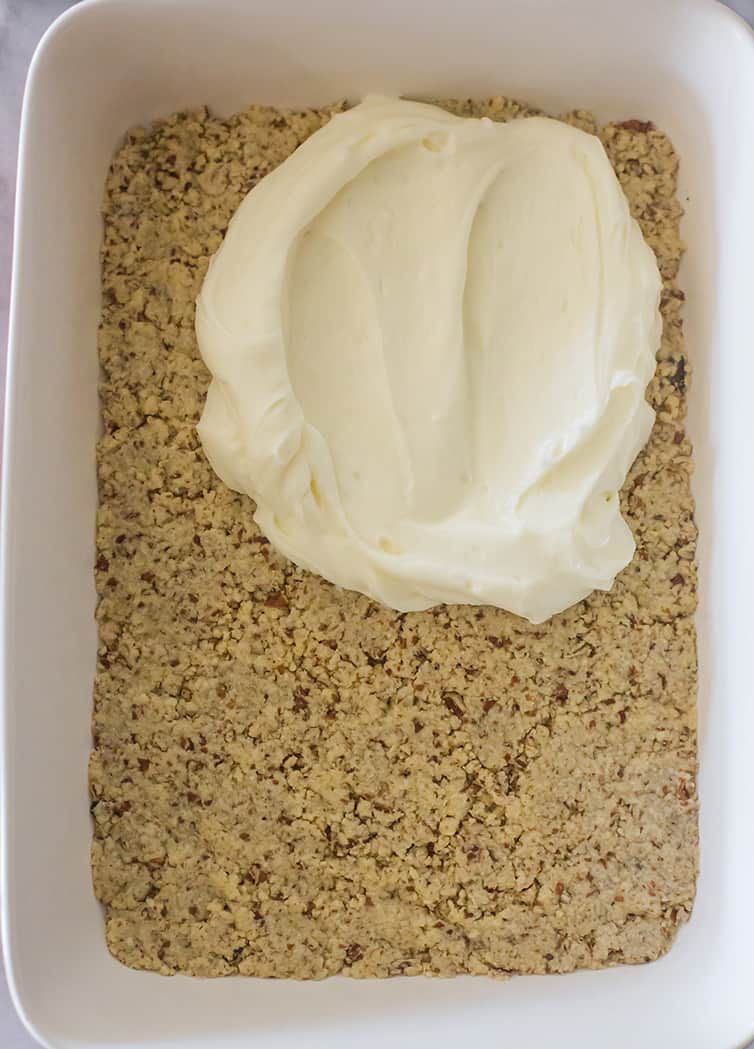 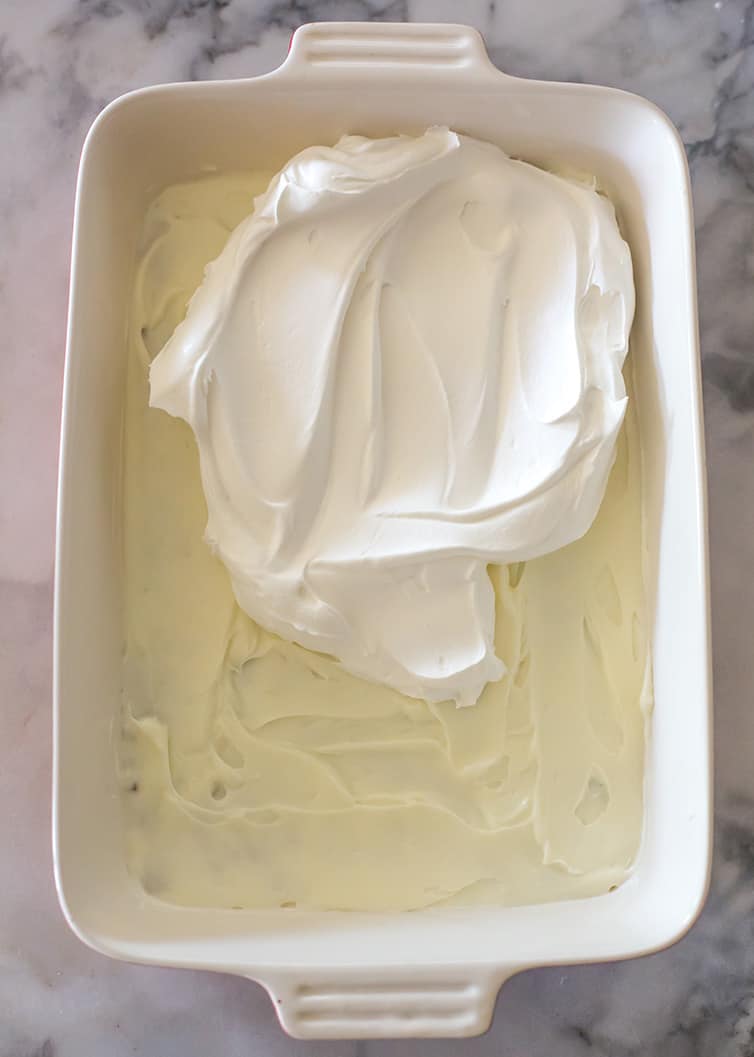 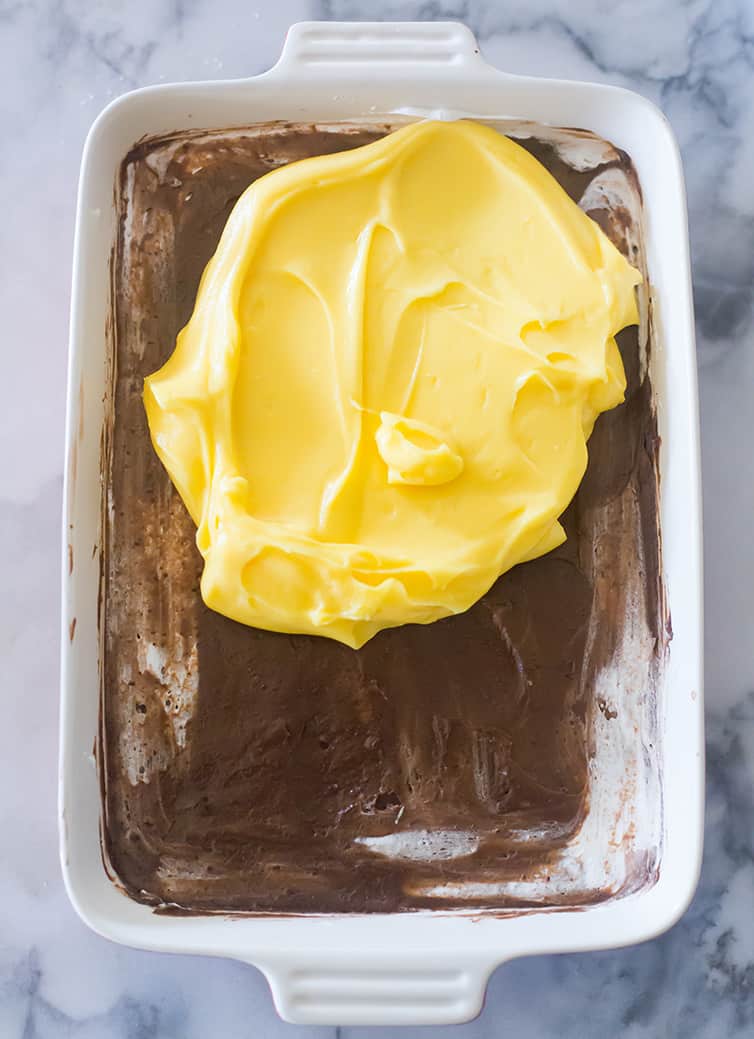 On top of the crust is a sweetened cream cheese layer, then a layer of Cool Whip, then chocolate pudding, then French vanilla pudding, and finally another layer of Cool Whip. Whew! That’s a whopper of an icebox cake and IT.IS.PHENOMENAL.

Truthfully, those bottom two layers – the crust and the cream cheese – totally make this dessert and make it stand out from any other icebox cake I have ever eaten. It’s totally sublime. 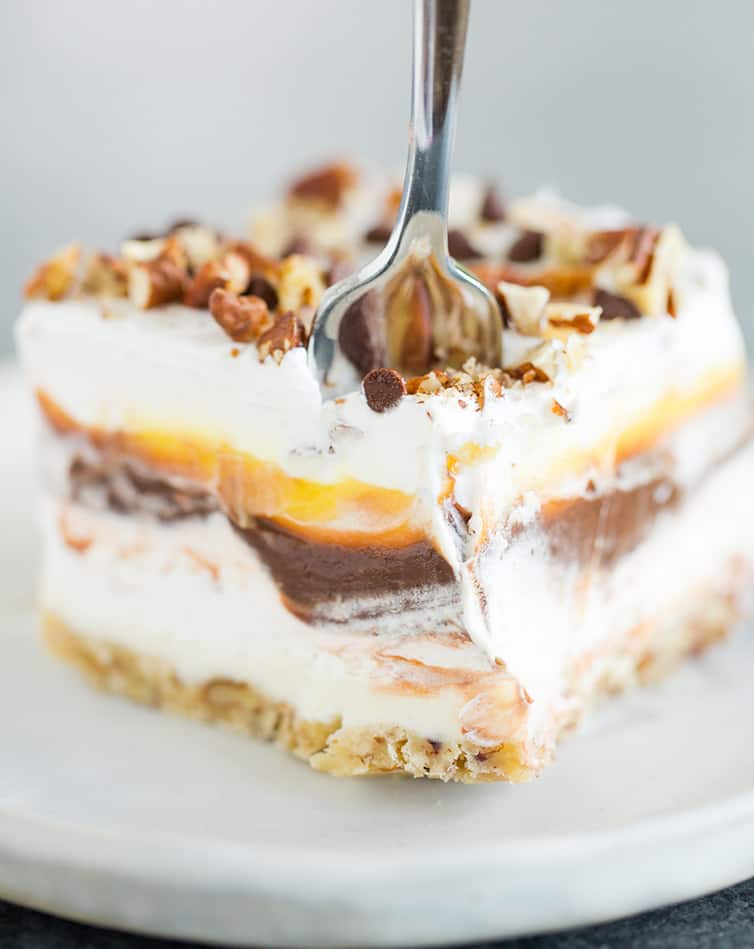 If you love icebox cake, lush desserts, pudding desserts, no bake desserts, or anything in between, then this is going to be a go-to summer dessert for you!

It’s super refreshing and perfect after a day spent in the sun. 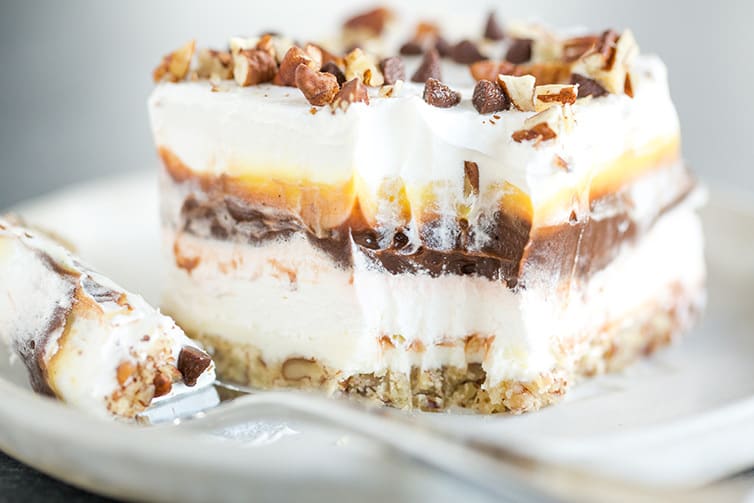 If You Like This Mountain Mama Icebox Cake, Try These: 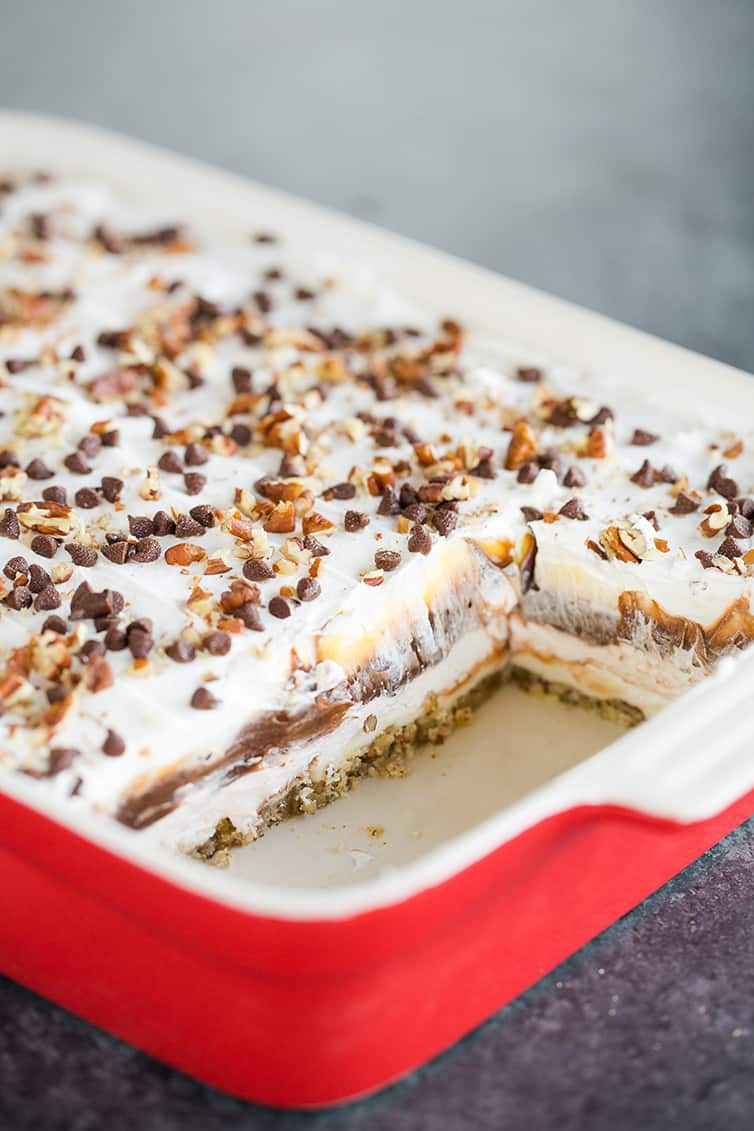 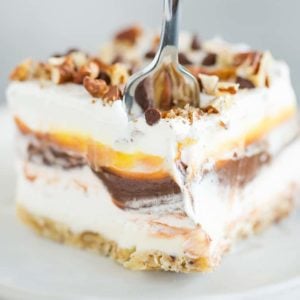