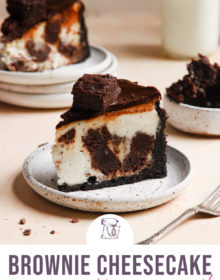 This luscious Brownie Cheesecake features cubes of brownies baked right inside the cheesecake filling, an Oreo crumb crust, and a chocolate ganache topping. This is a true showstopper of a dessert that is every bit as delicious as it appears!

The Best Chocolatey Cheesecake You’ll Ever Have

Oh boy, this brownie cheesecake! It first graced my kitchen nearly 14 years ago, and I immediately fell in love. I’ve forever been a die-hard cheesecake fan, and this one totally knocked my socks off. I saw it on Smitten Kitchen and couldn’t wait to make it. And I was just as impressed with it as I thought I’d be.

A lot of time has passed since I originally made this, and I’ve tweaked and altered it a bit to better suit my tastes as they’ve evolved over the years. And I have to say that those adjustments are only for the better, even though the original is still utterly fantastic!

The cheesecake itself has the perfect texture — wonderfully creamy and melts in your mouth. Pair that with the crowd-favorite Oreo crust, a bite of fudgey brownie in every other forkful, and a layer of decadent chocolate ganache … and cheesecake (or life, for that matter) does not get much better than this!

This cheesecake recipe is perfect for special occasions like birthdays or holidays when you’re feeding a crowd because a little sliver really goes a long way. It also freezes beautifully so you can have delicious brownie cheesecake at any given time. I hope this rich brownie cheesecake can provide you with some special memories of your own!

How I Made This Brownie Cheesecake My Own

As I mentioned above, I’ve made a number of changes to the cheesecake recipe since I first posted it all those years ago, but if you prefer the original, you can still find it on Smitten Kitchen. Here’s what I changed:

This recipe is threefold — the cheesecake, the Oreo crumb crust, and the chocolate ganache.

For the Oreo crumb crust, you’ll need: finely ground Oreo cookie crumbs (I like to pulse them in a food processor with the cream filling), white granulated sugar, salt, and melted unsalted butter to hold all of that deliciousness together.

How To Make Brownie Cheesecake

After you have gathered your ingredients, preheated your oven, and prepped your bakeware, follow these steps to make this incredible brownie mosaic cheesecake!

What To Serve with This Cheesecake

This brownie cheesecake is so incredibly rich on its own, you really only need a tall glass of ice cold milk to serve along with it. But a homemade iced coffee or a warm mug of hot chocolate would also be divine! 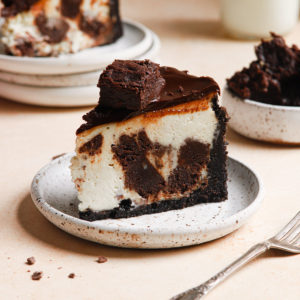 For the Oreo Crumb Crust

For the Chocolate Ganache