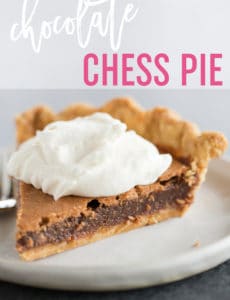 Chocolate Chess Pie is a classic Southern recipe; a cross between brownie and chocolate pudding, it’s baked right into a flaky pie crust and is a holiday must! 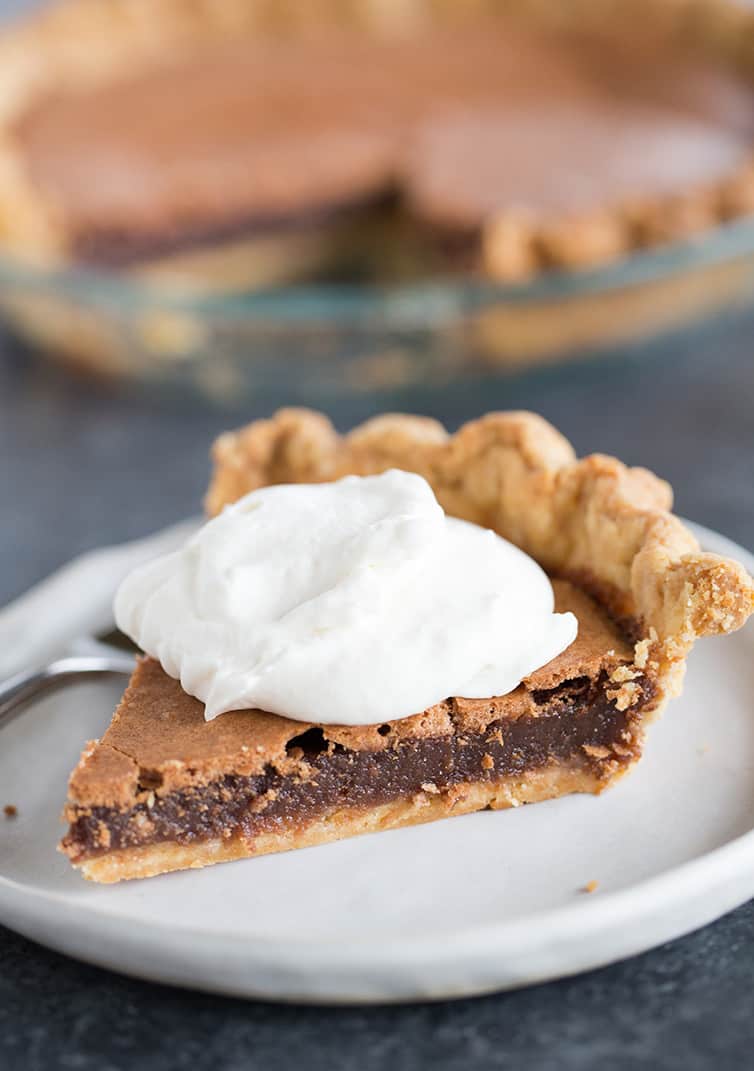 We’re smack dab in the middle of summer and fruit pie season, but today I’m coming at you with a totally new-to-me recipe: chocolate chess pie. Chess pie is a total staple in Southern kitchens, but I had never heard of it until Christine, a BEB reader, sent me this recipe for chocolate chess pie a couple of years ago. She said that her family makes it for Thanksgiving and Christmas every single year, which means it had to be absolutely fabulous.

Christine said this recipe is from the Angus Barn restaurant in Raleigh, North Carolina and that the only thing she didn’t love about it was that the filling was placed in an unbaked pie shell, and she wondered if it would be better in a partially baked crust.

That’s exactly how I made it, and this Pittsburgh girl could not have been more smitten with the combination of gooey chocolate and flaky pie crust! 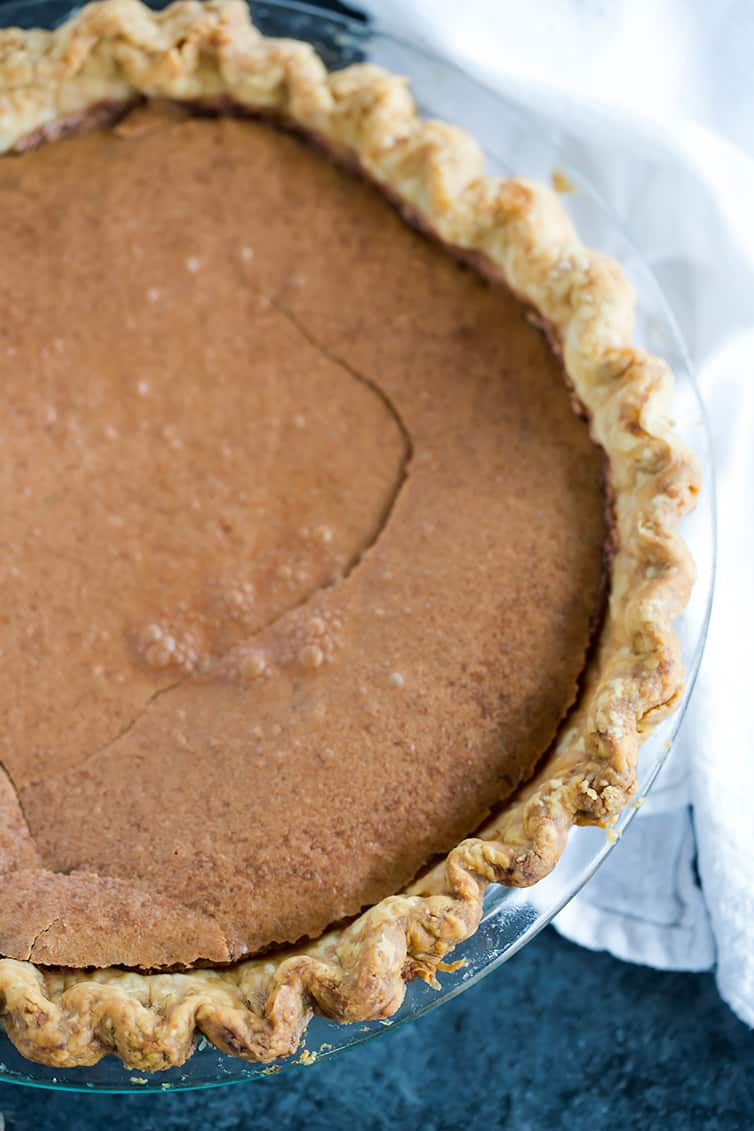 How Do You Make Chocolate Chess Pie?

It could not be simpler!

The first thing you do is prepare your pie crust, and while I love using my very favorite pie crust recipe, feel free to use your own favorite recipe, or even a store-bought pie crust if you prefer.

Then you mix together the filling, which only requires two bowls and about five minutes of your time. It’s very similar to brownie batter – melted chocolate and butter, mixed together with a couple of eggs, sugar, vanilla and salt.

Some recipes use cocoa powder or things like sweetened condensed milk, evaporated milk or buttermilk, but I just adore the simplicity of this particular recipe. 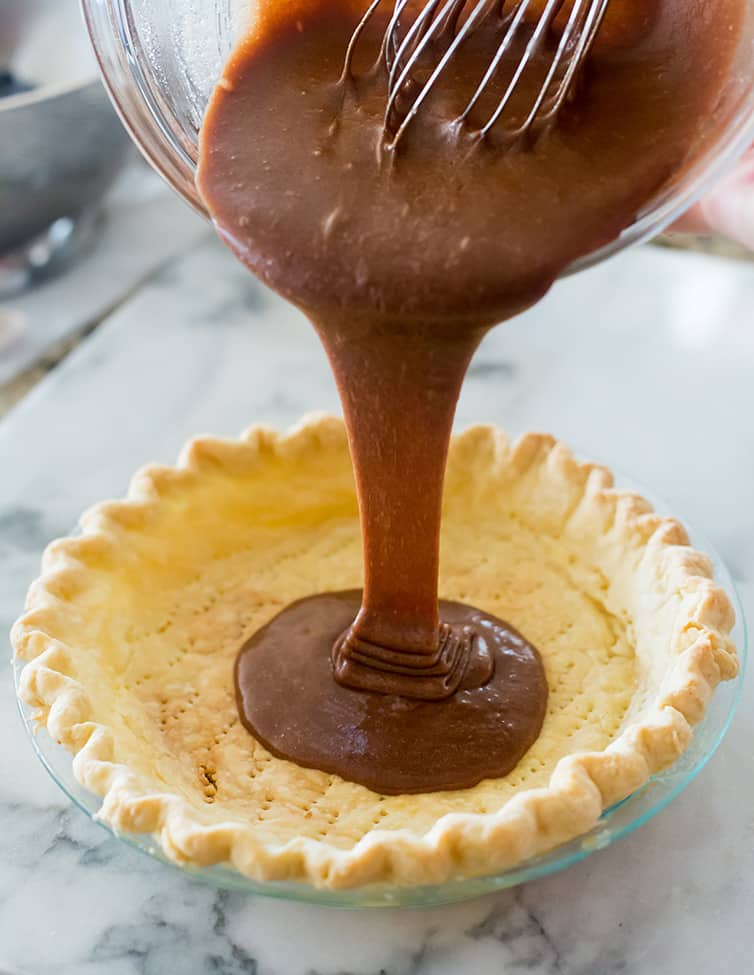 While traditional chess pie is often described as tasting like yellow cake batter, or the gooey layer of a gooey butter cake, it’s chocolate counterpart tastes very much like a cross between a fudgy brownie (complete with that crackly top!) and very firm chocolate pudding. 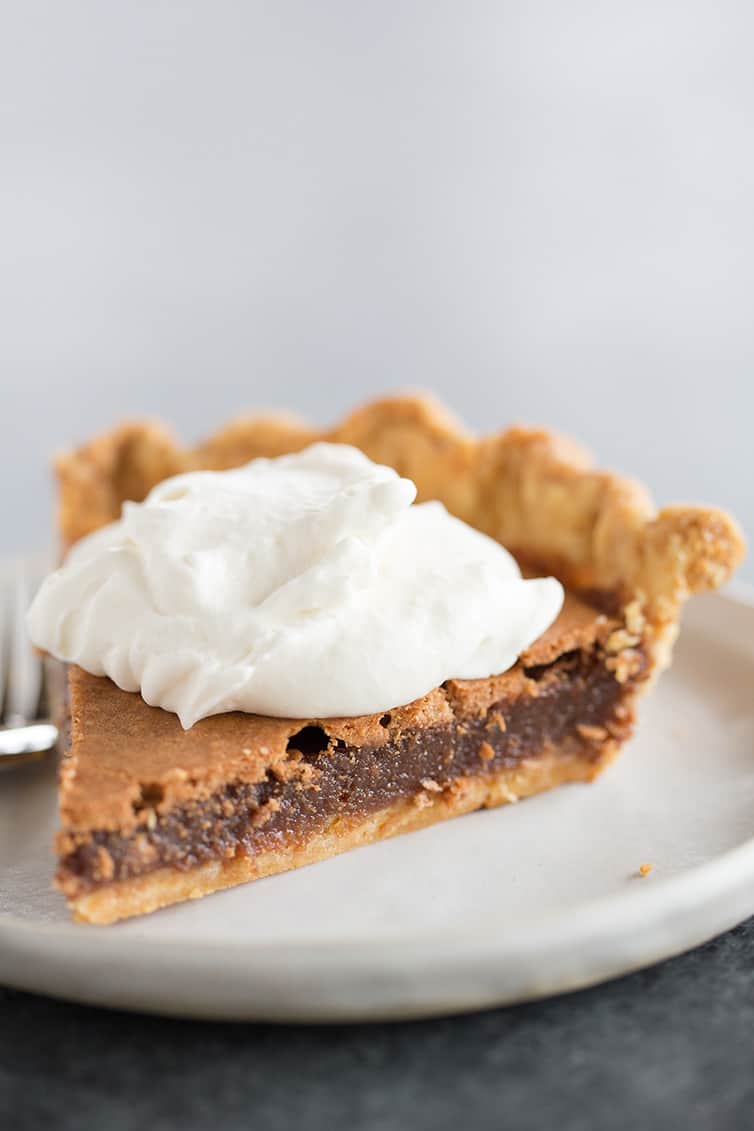 Why Is It Called Chess Pie?

I couldn’t find a definitive origin of the name, but this pie dates wayyyyy back to the 1700s.

The most likely explanation of the name is that since the English lemon curd pie filling is very close to lemon chess pie, the word “chess” may be an Americanization of the English word “cheese”, referring to curd pie. 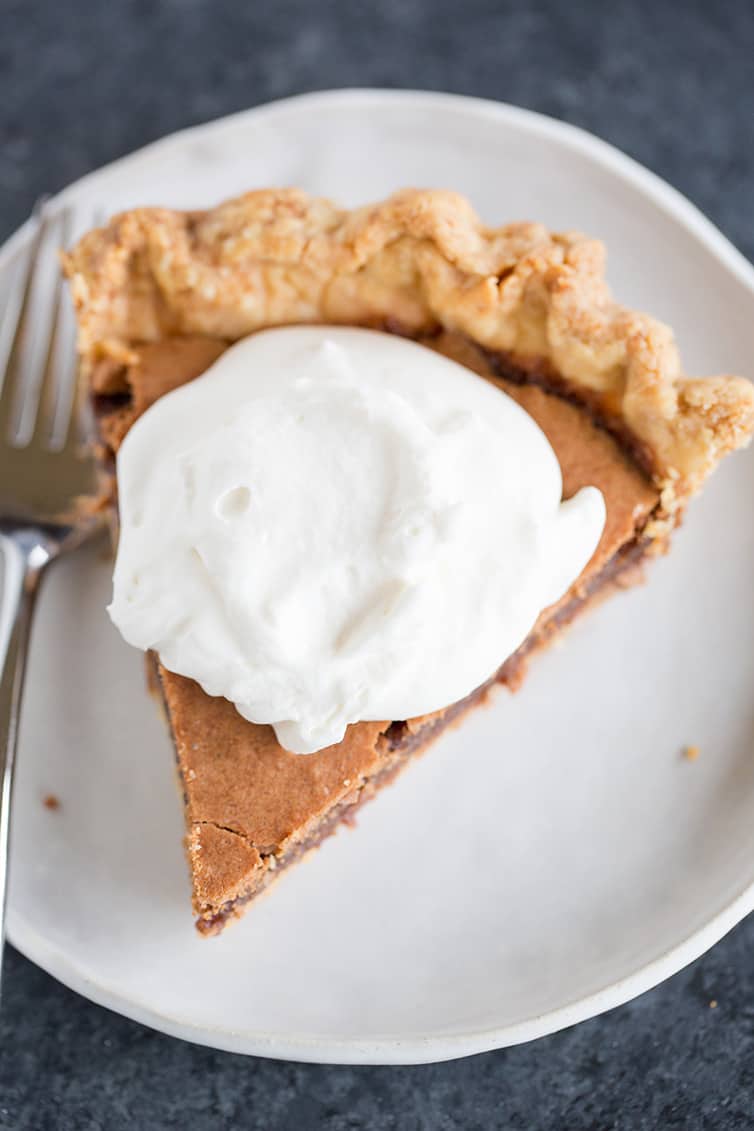 Do You Need to Refrigerate Chocolate Chess Pie? Can it Be Frozen?

You do not need to refrigerate chocolate chess pie; I kept mine at room temperature for up to three days (that’s as long as the leftovers lasted!) without issue. There is enough sugar in the recipe that it should be fine at room temperature. If you prefer to eat it chilled, however, you can absolutely pop it into the refrigerator.

As for freezing, I have yet to find a definitive yes or no answer, as I have not tried to do so myself. Some claim that the filling will be compromised when it is thawed, while others claim it will freeze just fine if it is baked first, then wrapped tightly with plastic wrap and placed in a freezer ziploc bag. Thaw in the refrigerator before serving. 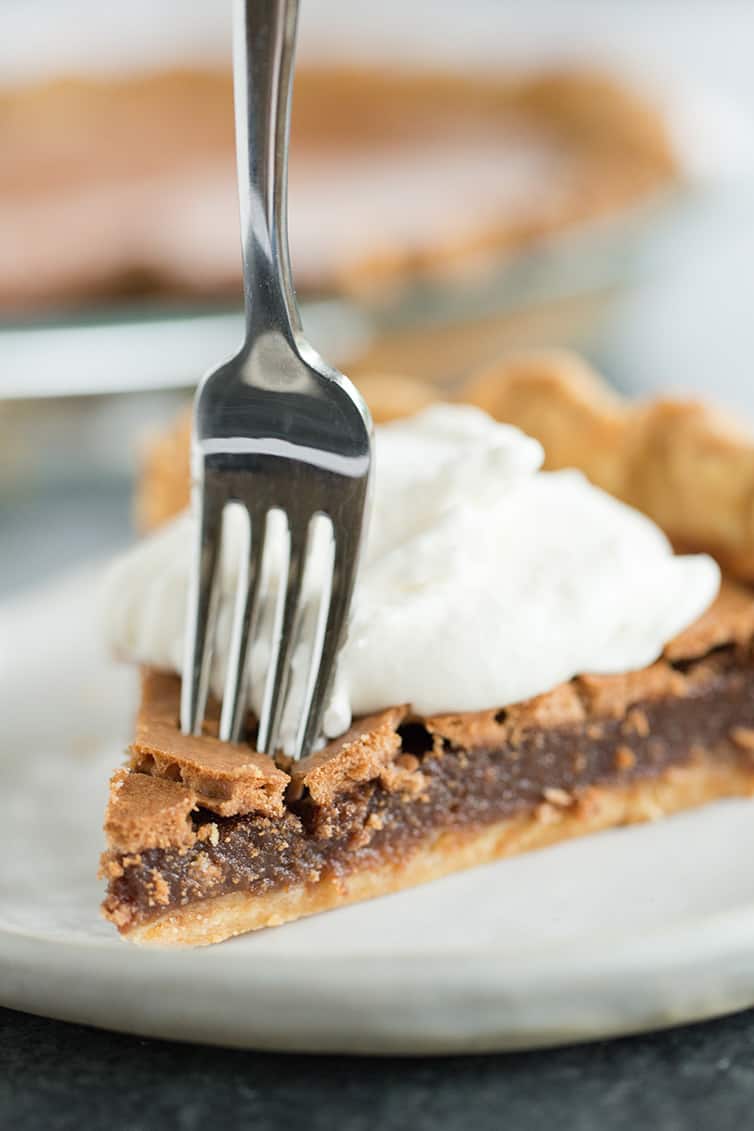 I am so thrilled to have a new Southern recipe in my kitchen tool belt; thank you to Christine for sharing its deliciousness with me!

If you’re a chocolate lover, you are going to be over-the-moon in love with this recipe! 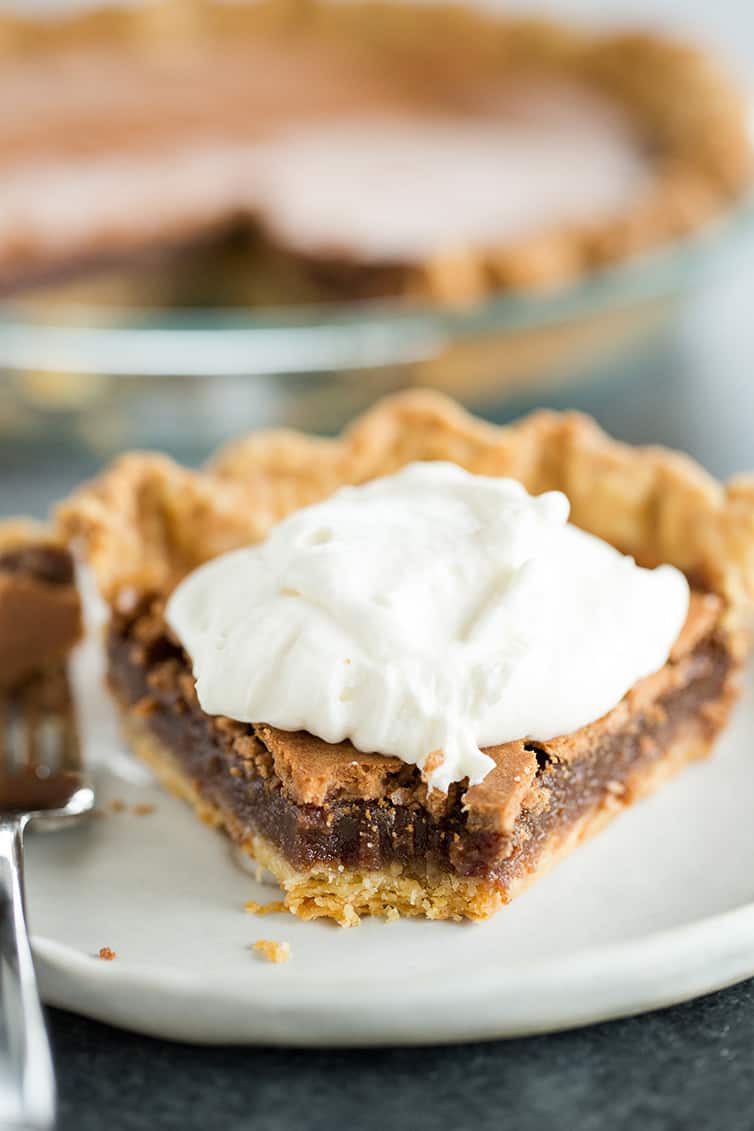 If You Like This Chocolate Chess Pie, Try These: 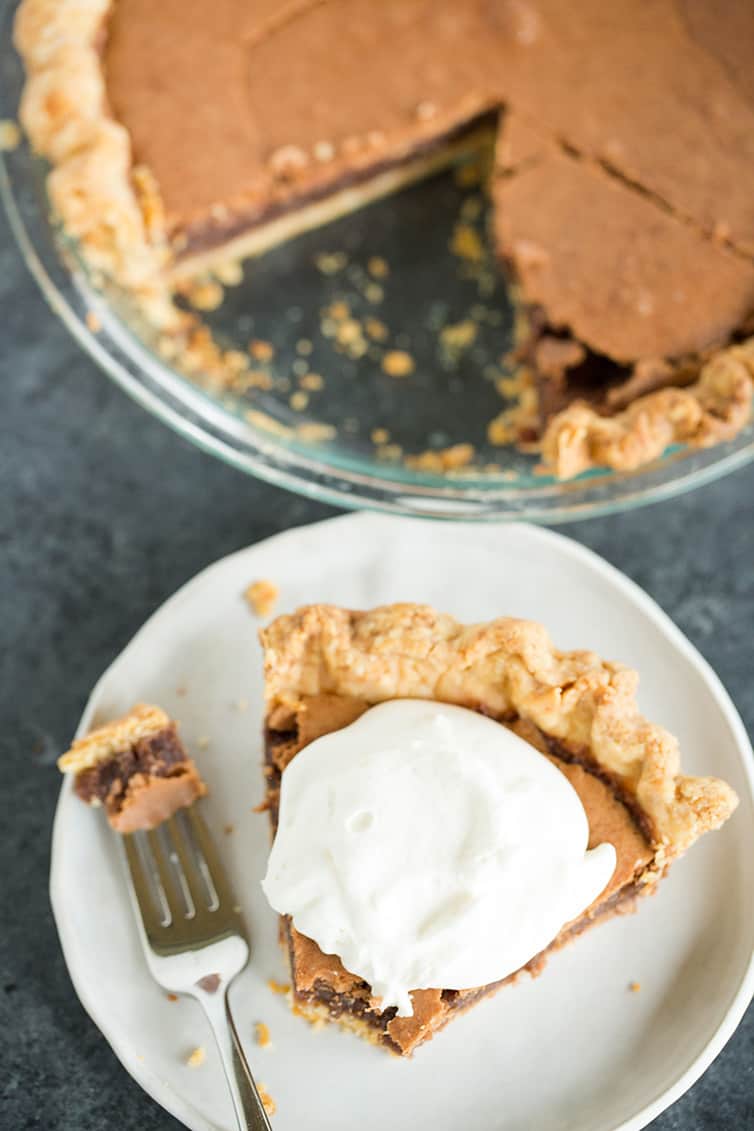 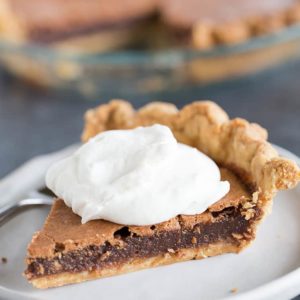 For the Pie Crust