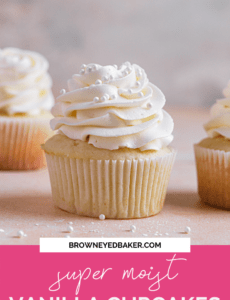 Simple yet flavorful, these moist vanilla cupcakes are an absolute delight! These light as air cupcakes are topped with a sweet vanilla buttercream frosting, that is not only easy to make but also easy to enjoy. Perfect for birthdays and other celebrations, you will never need another vanilla cupcake recipe again!

Cupcakes experienced a serious boon in popularity about 10 years ago and boutique cupcake shops started popping up in every neighborhood. Forget about traditional cupcake flavors; things like red velvet, mocha, salted caramel and peanut butter were all the rage. And as good as those cupcakes are (seriously, I love them ALL), is there anything more iconic or nostalgic that a simple vanilla or chocolate cupcake?

My husband will always choose a vanilla cupcake with vanilla frosting, so I’ve long been tweaking recipes and this recipe is the best yet!

Why You’ll Love This Recipe

Making these moist vanilla cupcakes comes down to 4 simple steps:

I’ve included my very favorite basic vanilla buttercream recipe, which is silky smooth, not too sugary, and pairs beautifully with any cake.

However, if you’re looking for something other than a vanilla frosting to top your cupcakes, here are a few delicious alternatives to try:

There are many different ways you can decorate your moist vanilla cupcakes, here are three of my favorite ways to top these fluffy cucpakes.

Why Are My Vanilla Cupcakes Dense, Crumbly, and Taste Like Cornbread?

One of the biggest complaints about homemade vanilla cupcakes is that they often turn out dense or (horror of horrors) taste like cornbread! So what gives? Why does this happen? How can you prevent it?

How to make more moist cupcakes?

The key to a moist cupcake comes down to a few important steps.

More Cupcakes Recipes for You to Try Next:

Light and fluffy vanilla cupcakes with vanilla buttercream are a classic dessert combination that is beyond easy to make at home. These moist cupcakes make the perfect treat for birthdays, anniversaries, or just because celebrations! 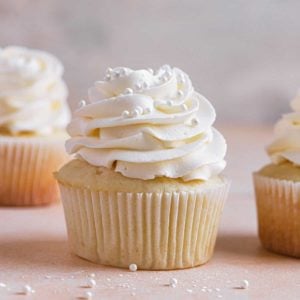 For the Vanilla Frosting